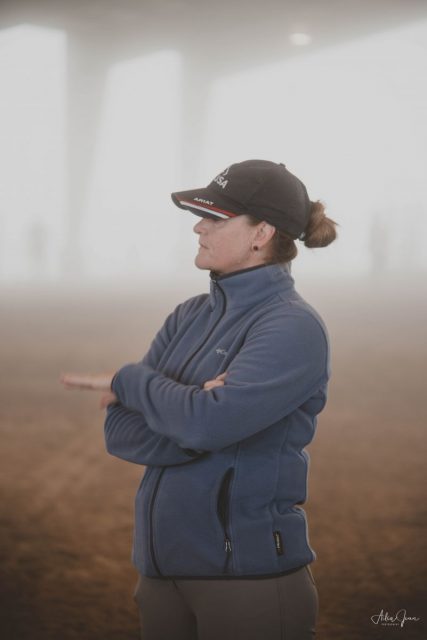 It isn’t often that a rider of Kim Severson’s caliber comes to Arkansas to teach. While the natural state’s eventing community is growing, and some quality riders and horses are slowly putting us on the map, Arkansas is typically known more for its barrel racers than its eventers. However, the eventers we do have are a dedicated, hard-working group of both young and adult riders, and each pair that participated was eager to soak up the knowledge this talented Olympian was ready to impart.

Saturday was primarily dressage day. “Go FORWARD!” was definitely the theme not just for the day, but for the weekend as well. Known for her ability to ride beautiful, low-scoring dressage tests, Kim really stressed the importance of adjustability and straightness as keys to success on the flat as well as over fences. The two-day clinic was held at Maumelle Equestrian Center just outside of Little Rock at the end of September. In typical Arkansas weather fashion, the morning started out chilly and so foggy that Kim could barely see the horse and rider pairs across the outdoor arena, so clinic organizer Meagan Landreth rerouted everyone to the covered ring for the rest of the day, which guaranteed the weather got warm and sunny. 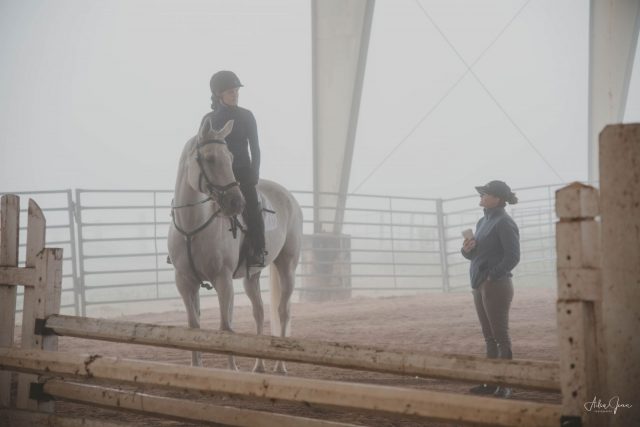 The soup was thick even in the covered arena! Photo by Ailsa Jean Photography.

Each lesson started with Kim observing each rider warming up their horse. Every trainer and upper level rider has certain types of equipment they like and don’t like, and Kim Severson is no different. She made adjustments to girths, made suggestions about bits and made changes to the types of spurs riders were using. Then each lesson got down to the nitty gritty.

Once in the covered arena, Kim focused on a small area at the end of the arena using 15-meter circles to create straightness and fluidity at the trot and canter. She paid attention to each rider’s accuracy and balance. Is the rider leaning in or leaning forward or back? Are the rider’s hands even and centered? (This was a big one!) Several of the participants were riding new or green (or both!) horses; she emphasized the importance of riding quietly, yet effectively. While she stressed going forward, Kim also condemned the habit of incessantly “scrubbing” (or kicking) the horse’s sides with your heels to keep it moving: “Give him a good Pony Club kick, and move on!” 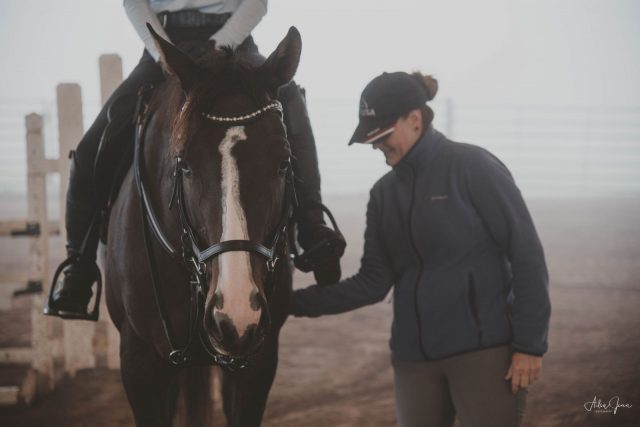 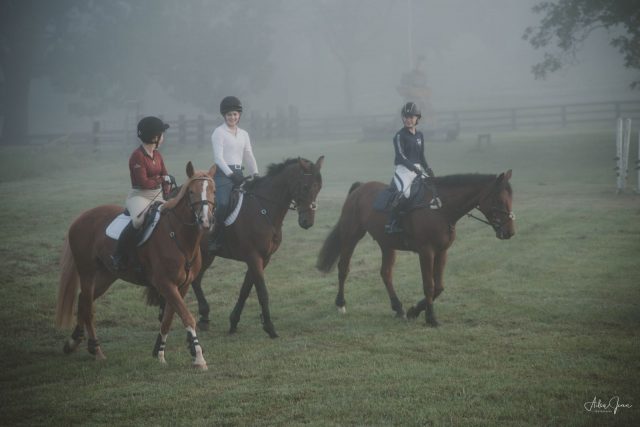 Novice/Training group riders get ready to jump on a foggy day two of the clinic. Photo by Ailsa Jean Photography.

After a good solid basis for effective and balanced flatwork, day two was stadium jumping day. Since most of the exercises would be focused on straight and balanced turning towards fences (anyone see a theme here?) Kim began each lesson with a simple but difficult flat exercise. Taking turns, each rider would canter straight down the long side of the arena at a somewhat extended canter, then make a 10-meter circle in the corner of the arena circling in towards “X” and then halting straight and square when asked to.

The object of the exercise was to effectively collect the canter while maintaining straightness which would in turn produce a square and balanced halt. AND perform the exercise while NOT leaning and keeping your seat bones and hands square and even. Easy right?! Ummm. Yeah. After auditing the clinic, I tried it on my horse at home. WAY harder than it looked! 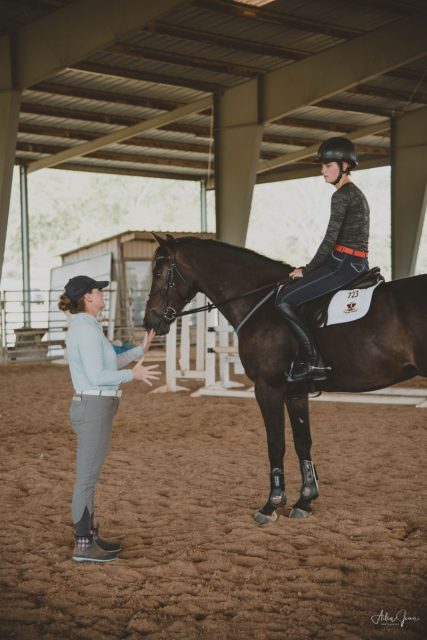 Once she was satisfied with the progress each rider made on the flat, it was finally time to get down to business and jump some fences. Once again there was a common theme. Stay straight; have a plan; don’t hover — SIT! Kim started with simple combinations of fences that were a couple of feet shy of being a perfect distance and then asked riders to get a certain number of strides between each one. She held them accountable for knowing what they got or didn’t get and why. Since the type and size of the horses in each lesson varied greatly, it was pretty interesting to see how each team handled what were seemingly simple demands.

“How many strides did you get? I’m not counting. Are you?”

As the number of fences increased, the importance of making turns correctly increased as well. By the end of the each lesson riders were jumping courses of eight to 10 fences, with very few straight lines, lots of 90 degree angles and quite a few rollbacks.

“The details are so important! If you’re not straight, you are asking for a problem. You have to stay organized. Don’t assume that just because you know where you’re going, that your horse knows where you are going. You have to tell him!” 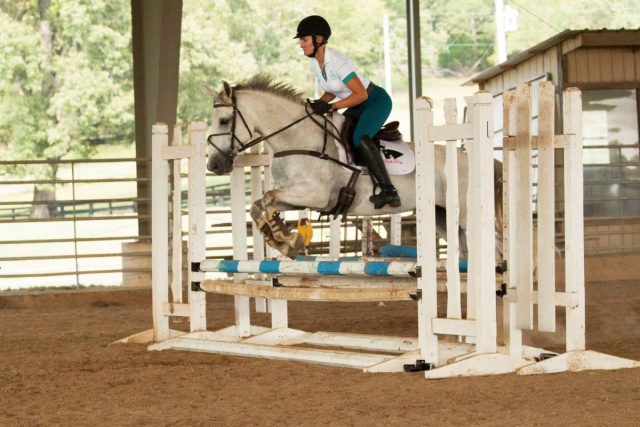 Not above using whatever means were necessary to get her point across and help a rider overcome a habit, Kim made one lucky rider, who was leaning too much and too unevenly on one rein, jump with one hand behind her back for most of the Novice group lesson. (Thankfully, pro Sarah Bradley was more than up to the task and gave us all a lesson in perseverance and stamina and just simply gettin’ it done!) Kim talked about how she likes to start jumping at the trot because it makes riders want to go forward and helps them to encourage their horses to do the same. But for me the most insightful nugget Kim shared was a tip from Jan Byyny about not riding with your hands in your lap.

“Put your hands forward to the jump. Stay connected but put them in the center, forward, straight toward the jump.” She explained that this helps the horse know where to go and to go there in a forward manner. Again simple, but for me, mind-blowing. And effective!

If you have the opportunity, I highly recommend riding in a clinic taught by Kim. She is everything that you would want and expect from a rider of her caliber. An insightful instructor who brought fresh eyes and exercises to the clinic, she is not a yell-er (“I don’t like to yell!”) And while she does expect directions to be followed, she tailored her lessons to each rider’s needs and abilities, quite often taking a rider to the side to talk quietly to them about sensitive issues instead of addressing them in front of the group. Kim encourages when needed, says, “LOVE IT!” when appropriate and corrects what needs to be fixed. I didn’t ride at this clinic, but you can bet I will when she returns. 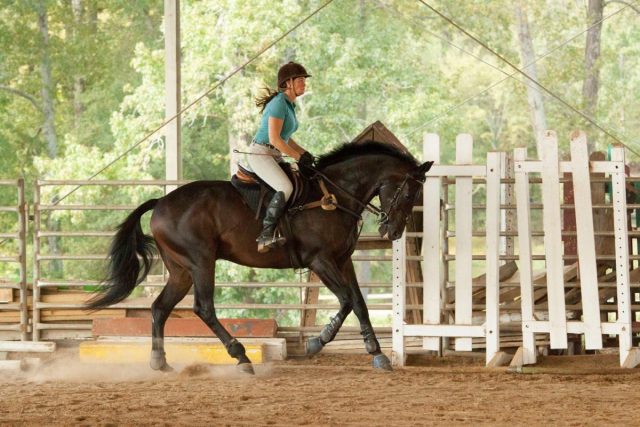