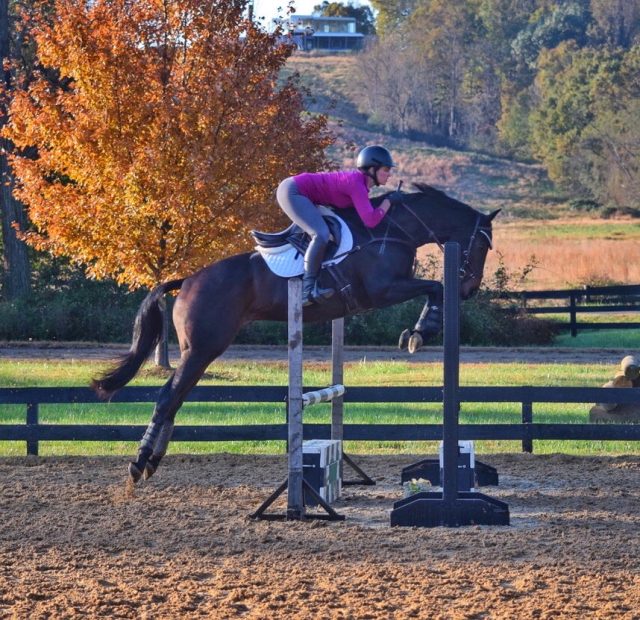 Oh hey guys, I’m back after a ridiculously long time without my computer and without EN! My stupid display broke while I was at the Retired Racehorse Project, and somehow it took the Apple team in my town about a month to fix the darn thing, and cost me basically as much as buying a new computer, but I’m back. It was a stressful time, but somehow I made it. Also, look how cute my baby OTTB is! He is a perfect model animal, except when he is an absolute monster.

Sixty-four horses will be competing this weekend in the USEF CCI* Eventing National Championship divisions. Forty-two horses are in the CCI*, and twenty-two in the CCI* JR/YR Championship. This fall competition at the Virginia Horse Center also features divisions from Beginner Novice through CIC2*, and serves as the end of the year competition for many horses and riders on the east coast. [Competitors Ready for VAHT]

The Loudoun Hunt Pony Club was founded in 1958 in conjunction with the Loudoun Hunt, and is one of the oldest pony clubs still operating today. Twice a year, they host a recognized event offering Beginner Novice through Intermediate levels. In the spring they run it out of Morven Park, and in the fall it is held at Oatlands Plantation right down the road. A staple for many Area II competitors, Loudoun HT has been up and running since 1981. [USEA Events A-Z: Loudoun Hunt PC HT]

Hot on Horse Nation: A Barn Hack For Those That Don’t Like To Groom

Speaking of the Breeder’s Cup, you better get up to speed on what’s about to go down. Kristen Kovatch is attending the event, bringing us reports on all fourteen of the historic championship races tomorrow, culminating in the Classic. With 163 horses running after qualifying all year through different graded stakes races, there is no shortage of drama and excitement to be had. [2018 Breeder’s Cup Need-To-Know Guide]