Monaco had a nice and muddy first run back and brought us home a blue ribbon! Getting very excited to head to Plantation next week!

Kimmy Cecere and Jacqueline Mars’ Landmark’s Monaco stormed around the VHT International CCI3*-S cross country course, posting one of only three double-clear rounds in the division. Their quick work boosted them into the top spot, earning Cecere her first international victory.

The pair earned a 29.9 in dressage, putting them in an initial fourth place. A fault-free show jumping round moved them into third. As they made their way to the startbox for cross country, the experienced gelding was making his enthusiasm for his job known. “He lets me know how he’s feeling,” Cecere said. “Then he just attacked the first jump. It was such a fun round.”

The terrain at the Virginia Horse Center in Lexington, Va., can catch some pairs out unexpectedly, but Monaco was fit and running for fun. At her home base in Middleburg, Virginia, the horses are conditioned on an uphill gallop track. Cecere laughed, “We hit the hill after fence 11 and he was like, ‘yes, this is my jam!’”

It was Monaco’s former rider Lauren Kieffer who partnered Cecere up with the 12-year-old Irish Sport Horse.

“I started working for Lauren about three years ago. I was hired to break the babies and after the first year she wanted me to have more upper level experience,” Cecere said. “She knew we’d be a good match. We get along really well. He’s been so good to me.”

Virginia Horse Trials was the very place they competed in their first show together at Training level in 2017. “I’ve always loved coming here,” Cecere said. With a CCI3*-S win under their belts, they now head to the MARS Equestrian Bromont CCI to compete ing the USEF/USET Foundation North American Futures Team Challenge. 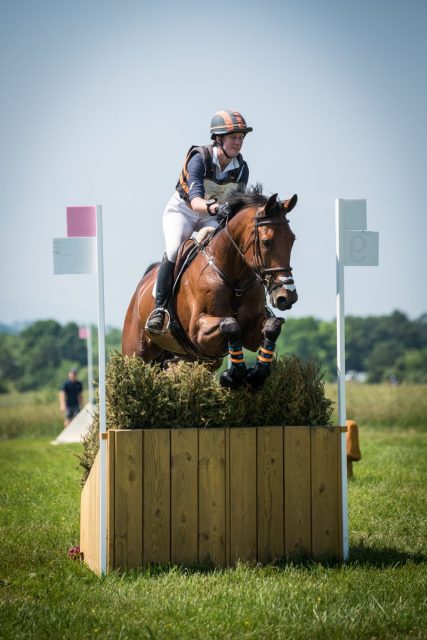 Kieffer and Jacqueline Mars’ D.A. Duras had been leading the charge after the first two phases of the CCI3*-S. However, the 11-year-old Dutch Warmblood gelding was only in need of a fitness run ahead of next month’s Bromont CCI4*-L. “We’ll let him go at his own pace,” Lauren had said. They nevertheless made good time, and a clear round and 4.8 time penalties dropped them only to second place.

Rounding out the top three in the CCI3*-L were Ivie Cullen-Dean and Fernhill Full Throttle. They were seventh after dressage, and with only 3.2 time penalties across the two jumping phases, the pair moved up to finish on a final score of 34.0.

Phillip Dutton and David Vos’ 9-year-old Dutch Warmblood, Get Ready Get Set, led the CCI2*-S from start to finish. Scoring a 25.7 in dressage, they added only a rail in show jumping and 0.8 time penalties on cross country in the gelding’s third international start. Emily Beshear and Templewood finished less than a point behind in second on a 31.4, followed by Michael William and Fernhill Fugitive, who finished on their dressage score of 31.6.

The top seven remain unchanged after cross country in the CCI2*-L, with all pairs completing cross country without jumping or time penalties. Will Faudree and Mama’s Magic Way are first on a 22.0. In tomorrow’s final phase, they have a rail in hand over Doug Payne and Baymax in second.