In a twist no one could have foreseen, Great Britain’s Kirsty Chabert – neé Johnston – took the top prize in today’s finale at the NAF Virtual Eventing 5*, wrestling the lead away from France’s Sebastien Cavaillon, our overnight leader after cross-country.

Today’s showjumping course saw competitors take to the arena on their bikes, wending their way over related distances, oxers, and – if exceptionally brave or stupid – see-saws. The aim? Get home clear in under 1:30. The penalties? Earned for exceeding that time (1p for every five seconds over), riding an electric bike (an automatic 2p), putting a foot down (4p) or using a conveyance with an engine (4p). Think that all sounds rather easy? You’d be wrong.

Just 16 of the 46 remaining competitors would come home with faultless rounds, while others would suffer at the hands of clever course design and the near-impossibility of pedalling in tall boots. 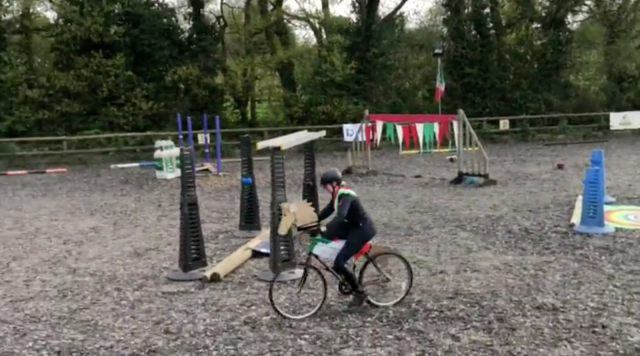 Vittoria Panizzon loses out on a top placing, but earns some kudos for her competitive aesthetics.

Kirsty, who sat sixth at the start of the day’s competition, produced a foot-perfect and penalty-free round to put the pressure on the top five – and they certainly felt it. Italy’s Vittoria Panizzon, who entered the arena in fifth place, suffered a blow-out after the second fence but bravely soldiered on, accompanied by her dog. The effort was too much for her wheeled conveyance, though, and she was forced to put a foot down in the middle of the oxer at three, earning herself a costly four penalties early on. That would be followed by another four penalties at the penultimate obstacle, plus two time penalties, sending her cascading down the order into 15th.

Fourth-placed Louisa Lockwood didn’t lose any ground on the leaderboard when adding four time penalties, but her cautious round allowed Kirsty – and France’s Tom Carlile, eventual third – to continue her climb up the rankings. Nobody to come had anything in hand – and when Matt Heath entered on an electric bicycle, his immediate two penalties would put him out of contention for the win.

And then there were two. Gemma Tattersall entered the arena in second place – but although she remained faultless and game-faced, her slow-and-steady approach saw her add a few too many strides, and she added a catastrophic five time faults to fall to fifth place. As Kirsty waited nervously in the wings to see if she’d take her first five-star win, Sebastien Cavaillon – the dashing Frenchman who had soared so impressively to the top spot yesterday – finished his final preparations. There was a moment of tension, a collective stopping of breath – and then, the gentle purr of an engine. Kirsty Chabert had earned the win by default, while Sebastien, with his initial four penalties plus a further eight for two feet down, would languish in seventeenth. 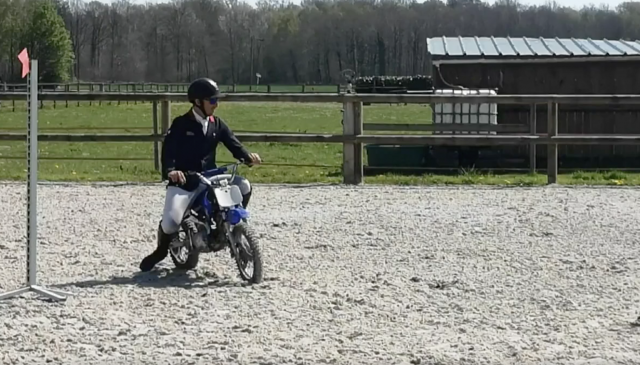 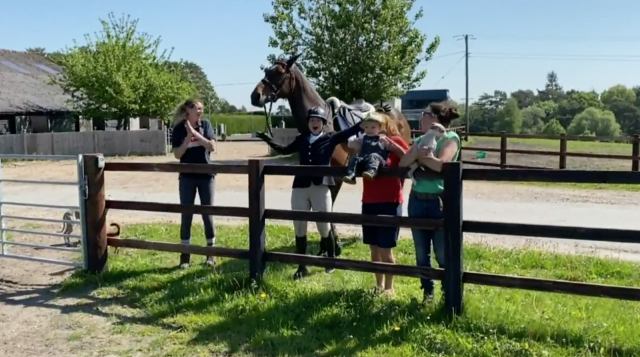 …while Kirsty Chabert celebrates in the chute.

“It’s awesome!” enthuses Kirsty, who climbed from a first-phase 20th, of her win. But was her dominance in the latter two phases the result of a particularly sporty childhood at school?

“No,” she laughs, “I was terrible! I never thought I’d finish on my dressage score.”

That dressage score of 32.8 was earned aboard Classic VI, with whom Kirsty finished 24th at Pau last season after returning to the top from maternity leave. Her son Henry and husband Arthur, also competing this week, were on hand for enthusiastic celebrations after the final round.

The USA had a tricky week, though a clear round from Hallie Coon allowed her to crack the top 20, finishing 18th overall and at the forefront of the Yank contingent. Boyd Martin finished 26th after adding four time penalties, while both Hannah Sue Burnett and Katherine Coleman suffered penalties for use of an engine – excusable, really, in the latter instance, as Katherine is recovering from a knee injury – to finish 38th and 29th, respectively.

WOW! You may have just heard our new total with Lizzie Greenwood-Hughes, but we had to shout about it! This has been a remarkable journey. THANK YOU TO EACH AND EVERYONE OF YOU who has donated. Our silent auction, raffle, virtual shopping village and art gallery will be open and running until Saturday 16th at 9pm so if you have been outbid, it's not too late to bid OR DONATE!! We just want to take the opportunity to thank all our RIDERS for being SUCH great sports and making excellent viewing! Their OWNERS for letting them compete their WONDERFUL horses, all their GROOMS for turning them out so well and turning their hooves to pro-camera crew for the duration of this event! Thanks to our headline sponsors @nafuk for their continued support and all the other sponsors who have kindly made this work. Thank you to everyone who has donated money, prizes and silent auction items, @iamwillbest and the artists for a BLOODY great night last night. A huge thanks Mark Jennings (@chillipeppertv) for an epic production, our commentary team @sturmeyspencer123 , Lizzie greenwood hughes, @holsfarr, Ginny Elliott, @pammyhutton, Terry Boon, Matthew Wright and our dressage judges Annabel Scrimgeour, Les Smith and Jane Tolley. And our team behind the scenes including Lara Surman (@zvari_marketing_ – PR & Marketing), Tom Jones (sponsorship), Kevin Frances (@thelittlewildones – Graphics), @lucyasnell (PR), @pumbaagoess (Marketing Assistant), Amanda Watson (The Equestrian Index), Jodie Seddon – Equestrian Law – @gunnercookellp, Jane Smith (J S Teamwear), Wendy Evans (Scorer), Miranda Collett (Eventing scores) Saving the best until last – @rachel.wakefield & Michael Wynne THANK YOU for your BRAINWAVE! Without them none of this would've been possible! 🤩🥳🦄

Even more importantly than the five days of brilliant entertainment, though, was the charitable cause at the heart of it all. By the end of the competition, Virtual Eventing had raised over £153,000 for medical charities around the world – an incredible sum made possible by the huge efforts of the team behind the event, led by Rachel Wakefield-Wynne of Uptown Eventing.

“It was really important that we did our bit for the NHS,” explains Kirsty. “They’ve helped us riders on numerous occasions, scraping us off the floor and piecing us back together, so it was the least we could do, and it’s an amazing cause. Rachel has done a fantastic job getting all of us together, so full credit to her and her team.”

A massive well done to KIRSTY CHABERT and the beautiful CLASSIC VI of @teamopposition WINNING the first @nafuk @virtualeventing 5*. Close behind them was @matt_heath_eventing and Askari. What an exciting few days it has been and all for a fantastic cause. . . Don’t forget the silent auction is still live so get bidding! #teamgreen #onetwo #virtualeventing #NHS #Thankyou #devoucoux #WINNERWINNER

Fancy giving it another watch, picking up your Virtual Eventing merch, adding to that amazing total, or picking up some mega bargains in the trade village? You can continue to do so here.

The riders are getting psyched up for the final phase of the @nafuk Virtual 5* Competition (some are 'kacking' themselves @the_mjet 😂) this afternoon kindly sponsored by @houso_app & @voltairedesuk and our weekend sponsors @bloomfieldshorseboxes 🎉 Hope you're all alive today after our EPIC HOUSE PARTY last night. Thanks to @iamwillbest and the awesome artists who played! We had donations flying in until midnight so THANK YOU EVERYONE! 🙏 TUNE IN TODAY 2PM BST! 🎬 virtualeventing.com OR Facebook live 👌 . . . #donate #forcharity #nhs #doctors #nurses #getinvolved #virtualeventing #herewego #partygettingstarted #eventing #finalphase #showjumping #elite #sport #extremesports #athlete #equine #equestrianlife #votd #sundaysessions

Phew that was nerve wracking but safely through the trot up this morning. Had to make a few minor repairs after our little trip yesterday. Fingers crossed we’re not feeling to stiff for the Showjumping this Afternoon. #virtualeventing. https://uk.virginmoneygiving.com/fundraiser-portal/fundraiserPage?pageId=1158289

After a long night of icing for @katyclarke12 Buster trotted brilliantly this morning and we are ready to jump at 2.51! 🤞no apple bobbing is required this time! #teamwayeventing #busterandmillie #dassettcooleydun #virtualeventing

And THAT ladies and gentlemen is how it's done… Nice one @tomcrispeventing – did you see him fly round the show jump course! Cracking effort by all so far! 👌😅🎉👏 . . . #poweredbynaf #naf #naffivestar #fivestarcompetition #juniors #potd #gif #eventing #eventingunited #eventingnation #horses #horsesofinstagram #greatbritish #riders

The top ten at the culmination of the NAF Virtual Eventing 5*.