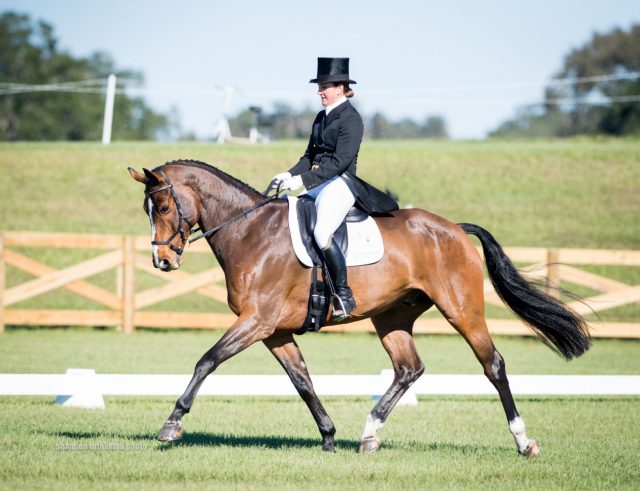 “Drake,” a 10-year-old KWPN gelding (Winningmood van de Arenberg X Zandora, by Landor S), finished fifth in his first CCI3* at Rebecca Farm over the summer, and Kristen said he came away from Montana a different horse.

“He keeps getting stronger and stronger,” she said. “Today the warm-up felt the same as the test. He was able to carry it through and actually came up a little bit more in the test. He’s very consistent and he tries really hard. He enjoyed the atmosphere and was really rideable and stayed quiet.”

Kristen came to Ocala with a goal to go faster than she did at Rebecca and joked that she would have preferred to score something closer to 20.0 to give her more breathing room for time penalties tomorrow. But she made it clear she plans to put the pedal down.

“He’s fitter than he’s ever been, and the course looks really good. It’s a really good course for him in particular. … There’s no reason not to go out and really attack it. I like that the first part is pretty galloping. It gets you in a rhythm. I think (course designer Clayton Fredericks) used the terrain really well,” Kristen.

“I know what I need to do to save a bit more time this weekend. I need to be better with my lines and get away from the fences better and not set up quite so early. I think if I do all those things, it will take a lot of time off.”

If you missed EN’s exclusive interview with Kristen over the summer, it’s a must-read. She returned to the Advanced level this year following a six-year hiatus while she started a family with her husband, Andrew. Her children, Beckham, 3, and Berkeley, 18 months, adore Drake, who is an extremely kind horse and very gentle with them.

Kristen also jumped her first 1.40-meter Grand Prix on him last weekend in Tampa. “It was the coolest thing I’ve done in a long time. I absolutely would recommend it because it makes everything seem so much more doable.” 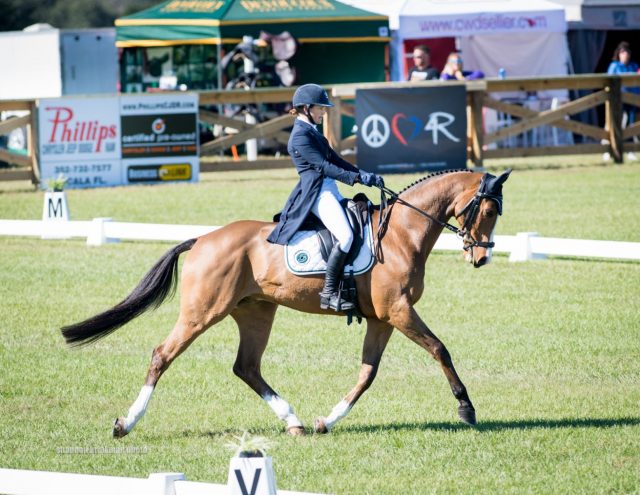 Katherine Coleman and her own Monte Classico scored 29.7 to sit in second place after dressage in the horse’s CCI3* debut. “Monte,” a a 9-year-old German Sport Horse gelding (Monte Bellini X W-Sally, by Saami xx), just missed matching his personal best from Blenheim (29.2) and is a serious horse for the future. Keep an eye on this one!

Lauren Kieffer and Jacqueline Mars’s Paramount Importance, an 11-year-old Holsteiner gelding (Pasco X Gesche II, by Louis), scored 33.1 for third place in their first CCI3* together as a combination. “Louis” last competed in a CCI3* at the 2017 European Championships at Strzegom, where he finished 15th with Ludwig Svennerstal. 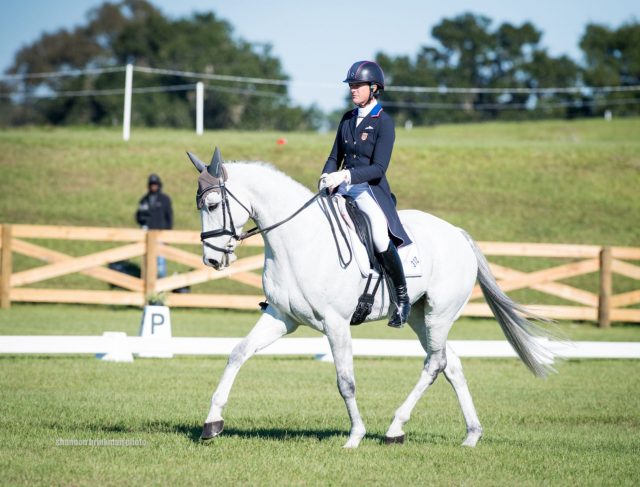 Leslie Law and Voltaire de Tre’, a 9-year-old Selle Francais gelding (Gentleman IV X Jasmina du Fresne, by Socrate de Chivre) owned by Tre’ Book, scored 33.8 for fourth place. “Splash” finished fourth in his first CCI3* at Jersey Fresh in May and is making his second appearance at the level here at the Ocala Jockey Club.

Jacob Fletcher and Atlantic Domino, a 13-year-old Irish Sport Horse (Dunlough Striker X Atlantic Amanda, by Glidawn Diamond) owned by Jacob and Frank Fletcher and Fletcher Farms, scored 34.1 to round out the top five after dressage.

Click here to view full scores in the CCI3*. You can also rewatch the live stream from dressage here. 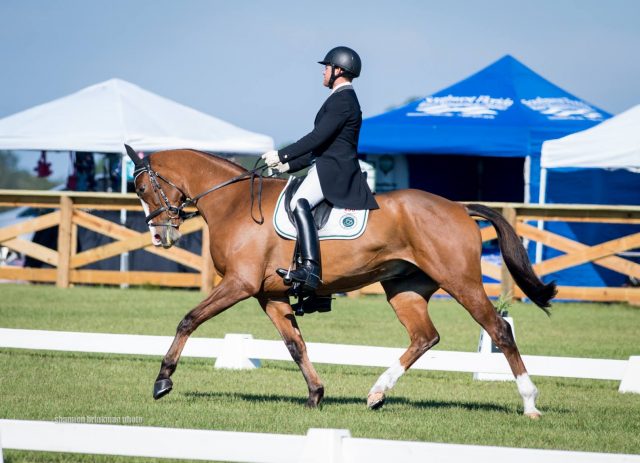 Looking to the CCI2*, Alex O’Neal and Fury H snuck into the lead on the second day of dressage today, scoring 29.5 to just best Doug Payne and Starr Witness’s day one leading score of 29.6.

“Marvin,” an 8-year-old KWPN gelding owned by Sally Cox, was sourced through Flynn Sport Horses two years ago and originally purchased as a ride for Ellie MacPhail O’Neal, Alex’s wife.

But the horse ultimately grew to nearly 18 hands, earning the moniker of “Large Marve” along the way, and Ellie opted to hand the ride to Alex this season.

“He turned out to be a much bigger horse than she usually rides and not really her type. She was really nice to let me have a shot at him. We suit each other really well,” Alex said.

“We’re both a little bit arrogant and like to do things our own way, and I think we respect that about each other. I just leave him alone and let him do his thing, and I don’t put too much pressure on him schooling. He always goes in the ring and does a really nice test for me.”

Alex and Marvin have had a successful year together since starting their partnership, winning the CIC2* at Chattahoochee Hills and finishing ninth in the Stable View CIC2*.

The Ocala Jockey Club is serving as Marvin’s inaugural CCI2* run, and Alex said he really likes the track Clayton Fredericks has laid out for the horses and riders.

“I think Clayton has done a great job, and I think the distances are really nice. I think it’s a long way around but it will suit my horse,” Alex said.

“I think the terrain will be really tough. I think you’ll see a lot of horses that looked good coming into this that struggle at the end, but I think Clayton did a good job of putting the right fences at the end.”

Doug Payne and Starr Witness, a 7-year-old KWPN mare Doug owns with Catherine Winter and Laurie McRee, sit in second place on 29.6 in her debut at the level. Leslie Law and Beatrice Rey-Herme’s JKF Vogue sat in second following the first day of dressage and now sit in third place on 29.7. 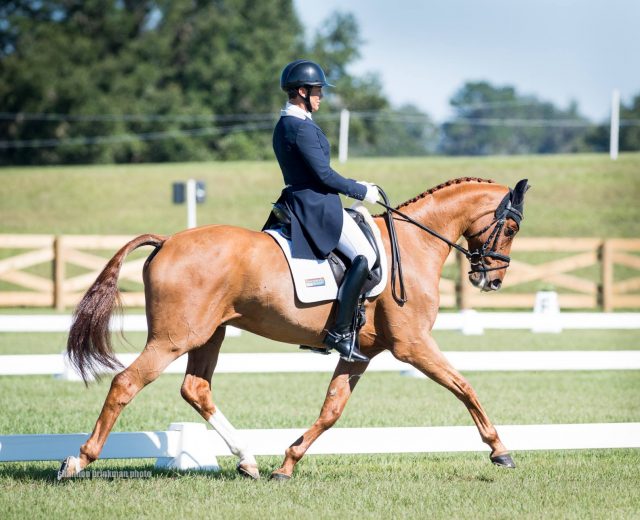 A massive 71-horse field came forward for the CCI*, and Tamie Smith and Ruth Bley’s Danito ultimately prevailed following two intense days of dressage. Their score of 22.6 has them soundly sitting in first place by a healthy 3.4-penalty margin.

Ruth originally purchased the Hanoverian gelding (Dancier X Wie Musik, by Wolkenstein II) as a 4-year-old sales prospect, but when he came to Tamie to sell she thought he was a serious horse for the future. Better known as “Cheeto” and/or “Burrito” at home depending on the day, the horse is proving he has what it takes — and Tamie suggested he is an even better mover than Mai Baum.

“At our first event together I didn’t know him, and I kind of surprised him going out of the start box at the (American Eventing Championships). I rode him just a little too strong there, “Tamie said, “but then after that I learned a lot about him.

“I think being on the East Coast has really helped us develop a great bond. … He’s been phenomenal. I had a blast in the whole test today.”

With Ruth’s blessing, the plan for Danito is now to see just how far he can go up the levels. “He’s got a big jump in him. You never know until they do it, but I think he will be a type who wants to do it because he trusts his rider.”

The schedule has been adjusted slightly for cross country day tomorrow. Click here for start times. The CCI* starts at 9:15 a.m., followed by the CCI3* at 12:55 p.m. and the CCI2* at 2:10 p.m. All of cross country will stream live on EQTV Network and here on EN. Click here for a fence-by-fence preview of Clayton Fredericks’s CCI3* cross country course.

CIC3* show jumping will also take place at 10:30 a.m. tomorrow. It’s going to be a bit of a mad day tomorrow at #OJC3DE and we’re glad you’re along for the ride. Go Eventing.