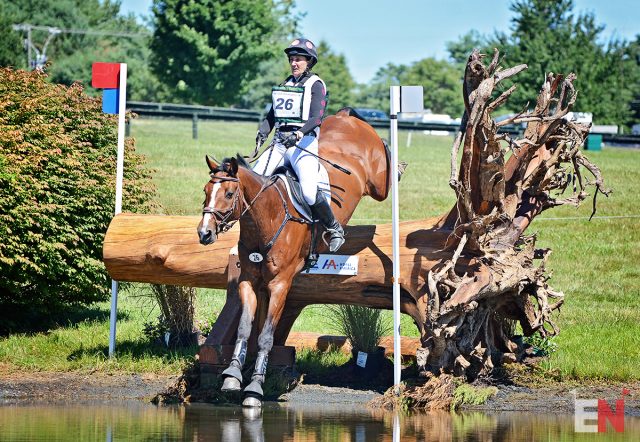 When Kristen Bond powered through a hailstorm on cross country at Carolina International this spring, crossing the finish signified much more than prevailing over the elements. It was the first time in nearly six years she had gone cross country at the Advanced level.

After her three-star partner Are You Ready retired from the upper levels in 2012, Kristen found herself without an Advanced horse to compete. She married her husband, Andrew Csik, the following year in December 2013. With her 34th birthday looming closer, Kristen and Andrew felt the timing was right to start a family.

“I always wanted kids,” Kristen said. “When Andrew and I got married, he felt the same way. I was pregnant the next spring after we got married, and it was really important to me that everything went smoothly.”

Kristen was about eight weeks pregnant at the Jersey Fresh International Three-Day Event in 2014, where she was competing I’m Sew Ready and Seams Ready in the CCI2*. When she suddenly came down with a virus before cross country, she withdrew the horses and decided to stop riding altogether during the rest of her pregnancy.

“It seemed like a sign to me that I shouldn’t be riding while I was pregnant because something could go wrong,” Kristen said. “I quit riding and the horses went to Phillip (Dutton) to keep competing since he had helped me find them originally through Carol (Gee).”

Kristen and Andrew welcomed their son, Beckham, several weeks ahead of schedule in late November 2014. While she had originally intended to be back in the saddle as soon as possible, giving birth via C-section changed that plan.

“The C-section slowed it all down a bit,” Kristen said. “When you think about it, colic surgery takes awhile for horses to come back from as well. My balance was really affected and sitting trot was super hard. Without jumping for awhile your eye is off, too.” 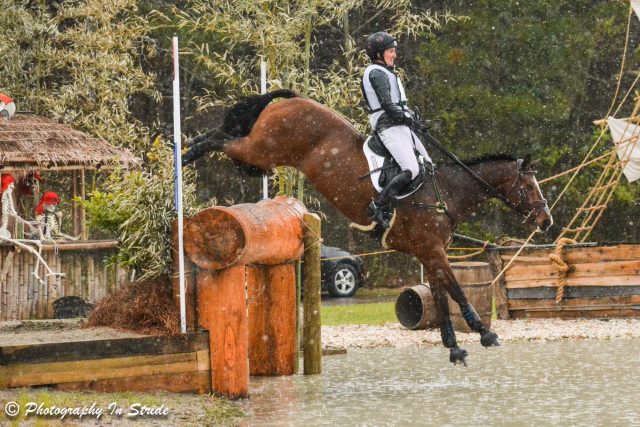 Kristen Bond and Enough Already jumping in the rain and hail at Carolina International 2018. Photo by Miranda Akins/Photography In Stride.

Battling Her Way Back

In August 2016, Kristen entered the Advanced division at Millbrook Horse Trials with I’m Sew Ready but withdrew after dressage because — you guessed it! — she and Andrew were expecting their second child. Once again her horses went to Phillip Dutton to continue competing, and in February 2017 Kristen gave birth to her daughter, Berkeley, via C-section.

The return to riding and ultimately competing didn’t get any easier the second time around, and Kristen said she once again had to battle the self-doubt that creeps in after long periods out of the saddle. By that time it had been five years since she had completed an Advanced event, and she wondered if she would ever go back to competing at the highest level of the sport.

“After Beckham it seemed like such a long road to get back to Advanced. Even between Beckham and Berkeley I wasn’t sure it was going to happen. For a lot of people that have had kids, they are fine with that decision and it works 100% for them. I think I would have been disappointed if I hadn’t tried, but I wasn’t sure if I was ever going to make it,” Kristen said.

“It’s just like life. You just keep plugging along and try to keep getting a little bit better today than you were yesterday, and if you’re lucky you’ll get there.”

Kristen ultimately did make it back to the Advanced level, which she said she owes in large part to Enough Already, a 10-year-old KWPN (Winningmood van de Arenberg X Zandora, by Landor S) owned by her mom, Liz. She got “Drake” in 2013 as a coming 4-year-old and has produced him from Novice level.

“He’s a really kind horse, and he’s an amazing trier,” she said. “He’d rather do anything than not make you happy.”

Not only did Carolina mark Kristen’s first time leaving an Advanced start box since 2012, but it was also Drake’s debut at the level. He tried his heart out for her in incredibly trying conditions on cross country, as the Advanced division ended up running under a heavy onslaught of rain and hail. Drake jumped clear on cross country with time penalties and also jumped a clear show jumping round the next day to finish sixth.

“Carolina didn’t quite go like how I had planned because of the weather, and the cross country course was massive,” Kristen said. “The weather was a little bit of a blessing for me because I was able to take my time. I was out there forever, but everybody was, so that worked out. But even though he jumped around and was amazing, I didn’t come back and say ‘we’re back.’ It was more like ‘we survived.'” 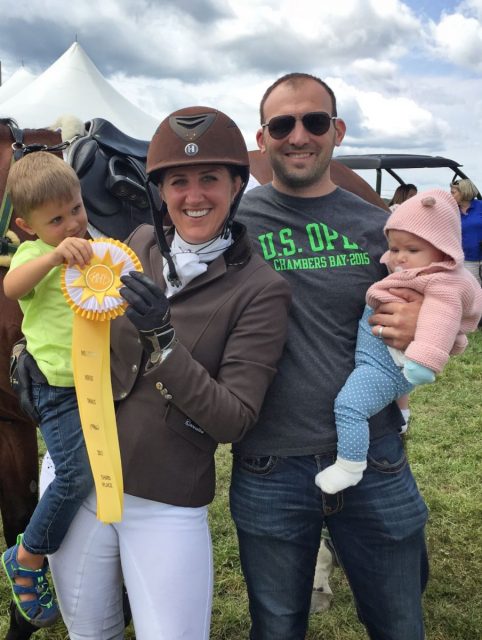 Kristen had originally planned to enter Drake in the Advanced division at Fair Hill’s April horse trials, but a conversation with Tim Bourke spurred her to enter the CIC3* instead.

“Tim told me that if you have a horse who is sound and fit and ready, then you do the FEI class because you don’t always get the chance to do it,” Kristen said. “It was basically the same course anyways, and I’m really glad I did. I’m really glad I have friends like that who can give me that advice.”

Kristen and Drake only added time penalties to their dressage score to finish third on 43.4 in the CIC3*, her first time competing at the three-star level in seven years.

“At Fair Hill, I was a little faster, he was a little braver, and he went better because I wasn’t pulling on the reins so much. At the end of that course, I was thinking, ‘We’re back. I can’t believe it. Finally.’ It was the greatest feeling ever.”

Kristen said she is now to a place where she feels totally confident leaving the start box for cross country, but getting back to that place mentally took more time than she anticipated.

“Initially, when you aren’t strong and you aren’t fit and back to your fighting weight, there is definitely a stronger voice in your head saying, ‘What if I fall off and get hurt?’ That for me went away when I got back to competition strength. Now I can sit the trot. Now I can see a distance. My breeches aren’t as tight. Now we’re in business,” she said.

“That voice gets smaller and smaller once you get back to the starting line. Now when I go out of the start box, I don’t think about falling off anymore. But it doesn’t happen right away. It’s important to be patient with the process because it does go full circle, but it doesn’t go full circle in nine months.”

Kristen also noted it’s important to realize that every woman is different when it comes to riding and competing after giving birth, and every woman will get back in the saddle on her own unique timeline.

“It’s so different for everyone. Look at Jessica Phoenix. She had a Coke and was ready to go. It wasn’t like that for me,” Kristen said.

“The great thing was that everyone understood. Phillip got it and told me, ‘Take your time. There is no rush. You don’t have to come out and go Advanced again. Take it easy and it will get better and better every time you go out.'” 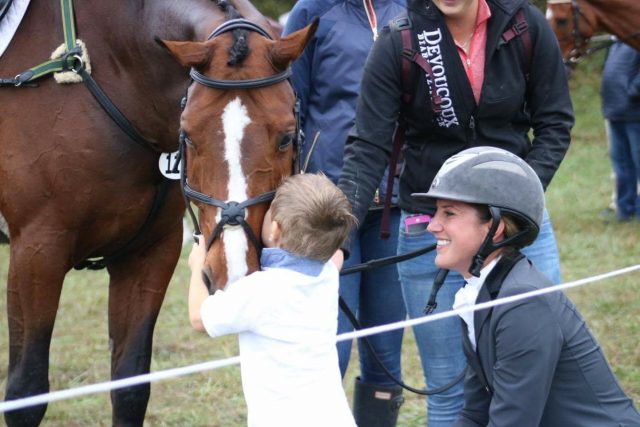 “Beckham will come up to Drake and hug his leg in the cross ties and do all these things you are never supposed to do around horses, but it’s like the horses understand they have to be careful because there are little people around now.” Photo courtesy of Kristen Bond.

Having children changes life dramatically for professional and amateur riders alike, and Kristen’s time out of the saddle resulted in changes to both her string of horses and business. Most notably, I’m Sew Ready’s owners ultimately decided to have Phillip Dutton keep the ride on the horse permanently.

“It was a tough decision to get pregnant the first time because the owners had just bought Seams Ready and I’m So Ready for me. It was the first time I’d ever had real owners. I did lose the ride on I’m Sew Ready, but it was a risk I was willing to take,” Kristen said.

“There’s no maternity-leave pay in riding. Not only do you not get paid to take time off, but you also might lose the ride on a horse. In the end, you have beautiful children, but you have to come back and work that much harder to make up for that deficit.”

Kristen said her husband, Andrew, and parents, Ray and Liz, are “beyond supportive” and have played a critical role in helping her balance life as a professional event rider and mother.

“Andrew is a saint. You do have your moments where you’re crying because you can’t get your boots on. He would tell me, ‘You look great. It’s fine. You’re going to get there.'”

Kristen’s whole family often comes to shows, as they did this past weekend at the Great Meadow International CICO3*. While Kristen and Drake sat 10th after dressage, an uncharacteristic two rails in show jumping dropped them down the leaderboard. Things did not go to plan the following day on cross country either. The imposing brush corner combination in the main arena caught out 45% of the field, including Kristen and Drake.

But she said having her children, Beckham and Berkeley, and fighting to get back to the Advanced level has given her so much more perspective on competing — and how to handle days that just don’t go her way.

“It all makes you stronger. The harder the climb the more it means to you when you finally get there,” Kristen said. “Now I so appreciate every round, even if it’s not perfect — even if you go in at Great Meadow and have two rails down, which has never happened to us before. I still appreciate just being able to be there because this is a really tough sport, and it’s really tough to get to the top and really tough to stay there.”

It’s no secret that women feel constant pressure to “do it all,” and that is no different when it comes to riding. Many woman feel that taking even a short time away from riding and competing can result in a a monumental setback, but Kristen is proving every day that women can balance riding and motherhood.

“There are moments, or days, or months or even seasons that are challenging, and you’re just not sure if you can handle it all,” Kristen said. “But if you want it, like everything, it’s totally possible and it’s completely worth it.”

Kristen Bond received a 2018 Travel Grant for The Event at Rebecca Farm, where she will contest Enough Already’s first CCI3* and return to the CCI3* level herself for the first time since 2011. We wish Kristen and Drake all the best as they make the trip to Montana next week. Go Eventing.