EN guest blogger Kristi Nunnink just returned from a successful weekend at Copper Meadows, where she won the Advanced division with her rockstar mare R-Star. Kristi and Rosie next head out to Texas to tackle the AECs before boarding a plan to France for Pau. Kristi was kind enough to send in a recap of her weekend. Go West Coast Eventing! 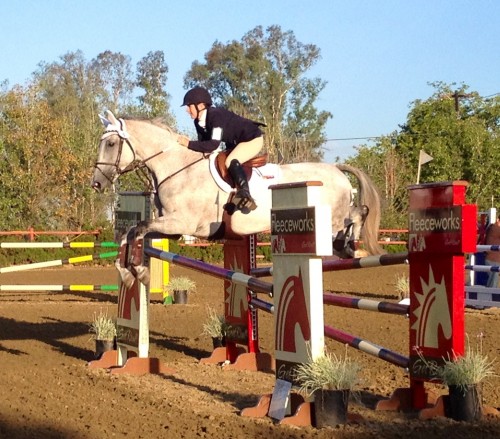 I’m just back home from a fabulous weekend at Copper Meadows. My great friend and one of my mentors Bruce Davidson asked me several times how I could live on the West Coast with all of those wildfires. I laughed and replied that they really weren’t that big of a problem. Wrong! Both times that I have gone to Copper Meadows this summer, the Grapevine has been closed for hours due to a fire on it.

The Grapevine is a section of the interstate that basically winds up over and down the mountains that separate southern California from the rest of the state. With temperatures over 100 degrees on Sunday, my truck decided that its transmission couldn’t take the heat, and I had to pull over and let it cool for two hours. Other than that, it was a great weekend!

James and Taren Atkinson did a brilliant job with their event, as usual. They really tried to help everyone deal with the heat. Coats were waved from the beginning of dressage day, and Brab Crabo and I were not too shy to ride our Advanced test without them. It must have been helpful since we both received excellent scores, although Hawley Bennet looked cool as a cucumber in hers and gave us a dressage lesson.

Cross-country day was again really hot, but the upper-level horses were all done by 11 a.m. The course was lovely, as was the footing. I had taken Rosie (R-Star) mostly to test out a new bit. I can only really tell if it’s going to work in a competition, since she always pretends to be obedient schooling. She was so ridable, and I was thrilled with her cross-country round. My two-star horse Astro also put in a foot-perfect round, and my lovely old Advanced horse Cornerstreet competed at his first competition since being injured in 2010.

Show jumping day dawned just as hot, but we started show jumping at 7 a.m., which really helped. The course was quite twisty, and there were rails coming down everywhere on course. All three of my horses jumped double clear, and I was thrilled with them. The weekend was a great success, and they are now home and sound.

We are getting ready for the AECs and then our trip to france. Im so excited about going to Pau that it is very hard to focus on the AECs. I’ve been really trying to work on our dressage for the trip and have been going to Carmel regularly to have Bea and Derek di Grazia oversee our progress. I am pleased to say that we are making progress, but more work is needed to be truly competitive in Europe. I will let everyone know how the AECs go!