EN’s coverage of the Maryland 5 Star is brought to you by Kentucky Performance Products. KPP is our go-to for all things nutritional when it comes to supporting our horses and their healthier selves. Managing horses is a challenge, but KPP makes it simple — and they treat you like a horse owner, not just a customer. You can learn more about KPP by clicking here. 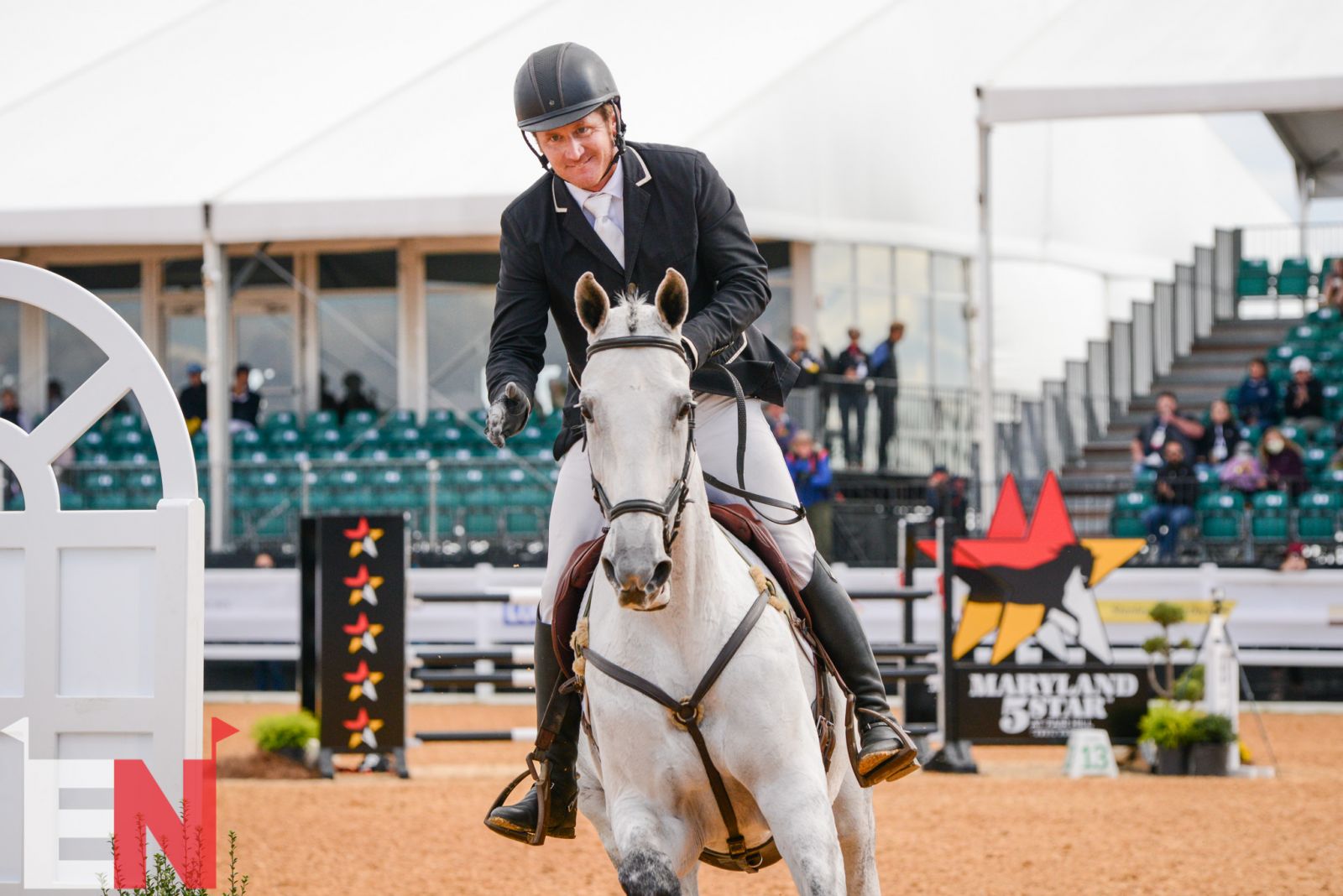 Kurt Martin and the beautiful gray Holsteiner mare D.A. Lifetime seized hold of the USEF National CCI3*-L Championship at the Maryland 5 Star early and never looked back. After the conclusion of show jumping this morning, Kurt and “Clarence” ended their weekend on their dressage mark, adding no penalties around an influential Ken Krone-designed track to seal the deal on the championship win.

The 9-year-old mare by Lingh and out of Timeless, who is owned by and bears the initials of Debbie Adams and her Debbie Adams Select Sport Horses moniker, has been on an upward trajectory that began when the mare first started her eventing career in Kurt’s program back in 2018. After spending the majority of the abbreviated 2020 season at the Preliminary and CCI2* level, Kurt and D.A. Lifetime moved up to the Intermediate level and finished out their season with a first CCI3*-L completion at Virginia Horse Trials last October. Now, this win comes as their third in 2021, also marking their lowest finishing score since the mare was competing at the Modified level.

Kurt remembers taking the mare to the Florida Horse Park for a lower level event soon after she came to the U.S., describing how she’d buck and spook and overall just show her exuberance. A definitive “one person horse”, Clarence has been a horse Kurt has had to thoughtfully produce (isn’t the saying, “ask a mare”?). But thanks to help from both Debbie Adams and James Burtwell on the flat, Kurt says the mare has really shown her talent as her strength increases.

Kurt describes “Clarence” as very enthusiastic and keen (but a total puppy in the barn), noting yesterday after cross country that the course and terrain was probably good to help tamper that energy — but that the jumps still didn’t really “hold” her, indicating she still had more power, scope and bravery to burn. While he very much sees five-star potential in this mare, he’s committed to the process of tactful production. After all, he knew this was a very special horse for the future from the moment he sat on her, describing the shopping trip to Germany that he went on with Debbie Adams (who in her own right has an excellent eye for top horses, having sourced horses such as D.A. Duras. Debbie Adams also served as a judge for the Young Event Horse competition this week and serves as a USEF judge and ICP instructor) and Tony Rosati that led them to D.A. Lifetime. “It’s all about the stepping stones and having a really good horse and producing it, and that’s what we have here,” Kurt described. “We have to continue to train the balance, but she wants it as much or more as any other horse I’ve ever ridden.” 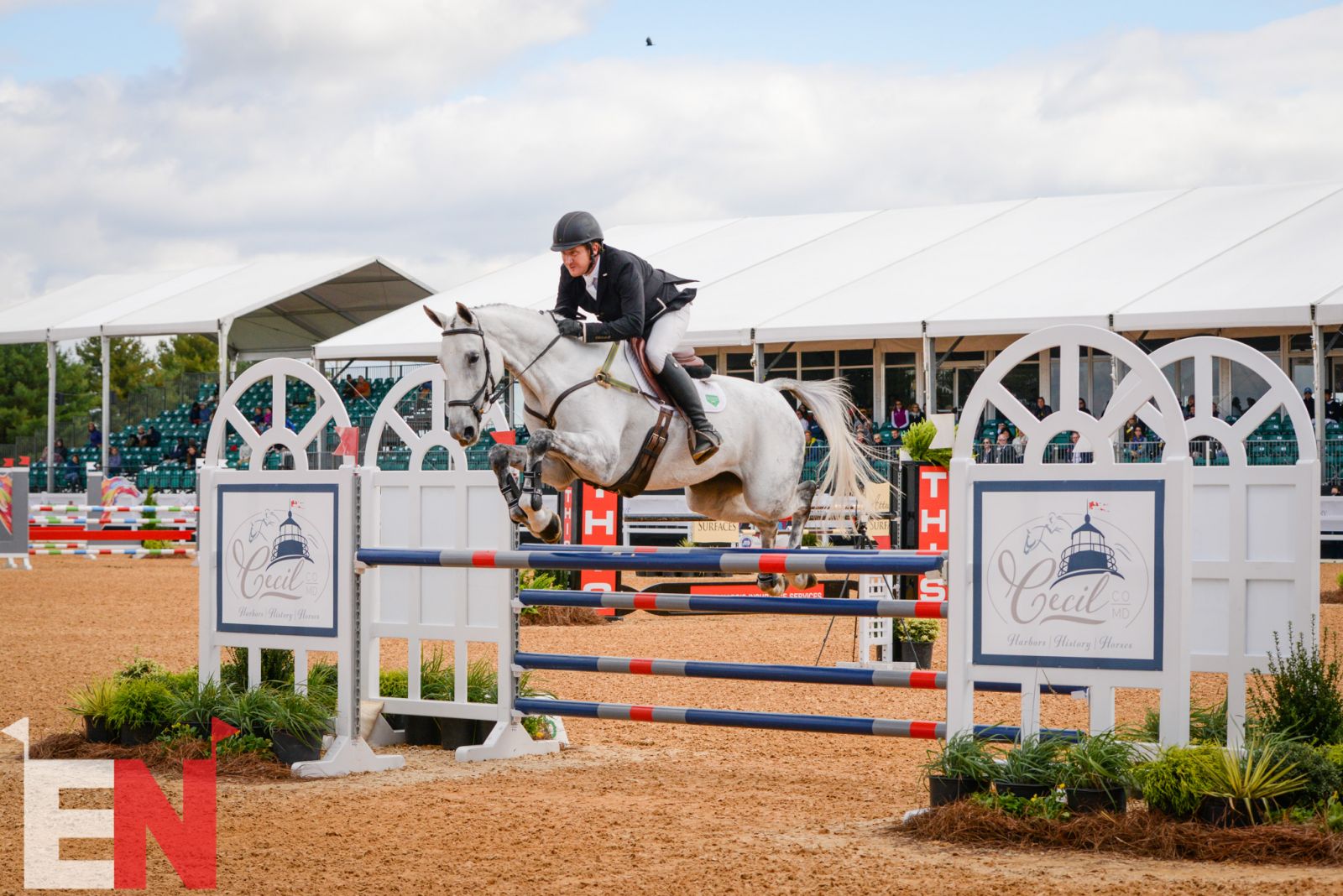 Coming into Ken Krome’s twisting show jumping track in the new main arena surrounded by grandstands, Kurt wasn’t sure how D.A. Lifetime would respond. “I truly believed if we put our best foot forward, we could win,” he said. “She’s been second and first in her last two FEI, so it came down to the show jumping. I just believed in the horse — I knew that she wanted to do it and it’s almost, I’ll be honest with you, harder to ride such a nice horse because you don’t want to make a mistake for the horse. And that’s how I felt about it. I believed in her, and I was confident but when I went into the show jumping I just looked up and took a deep breath in every single fence, and what was going to be was going to be. And she did that for me and tried very hard — and that’s what a partnership is. That’s why I do love a mare for that. She’s dug in for me.”

A fun fact: D.A. Lifetime got her barn name, “Clarence”, after the Bruce Springsteen song, Jungle Land, came on while the group was driving to the airport in Germany following their horse shopping trip. They’d just decided to take the mare back to the U.S. with them, and as they sped down the Autobahn, sax player Clarence Fleming became the inspiration for the new addition’s nickname. 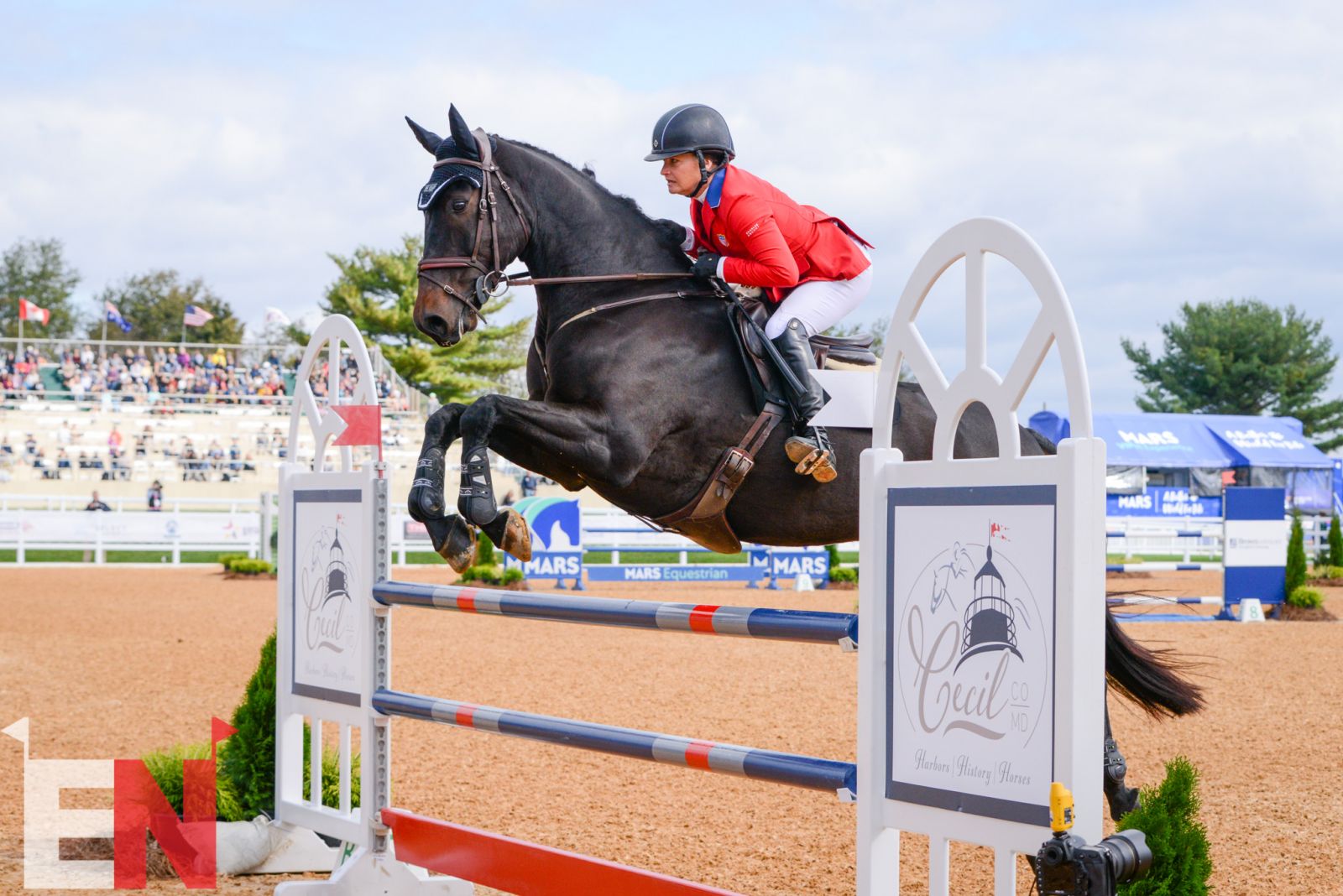 While eight riders produced double clear show jumping efforts this morning, the rails fell throughout the division and prompted a shuffle in the remainder of the top three. In the end, it’s Hannah Sue Burnett with Christa Schmidt’s Carsonstown (Loughere Cappuchino – Nonavic Spyridonna, by Limmerick) who would move up from fourth to finish in second place on a score of 28.1 in the gelding’s CCI3*-L debut. This is another 9-year-old, with whom Hannah Sue has been partnered since he was brought over from Ireland in 2019. 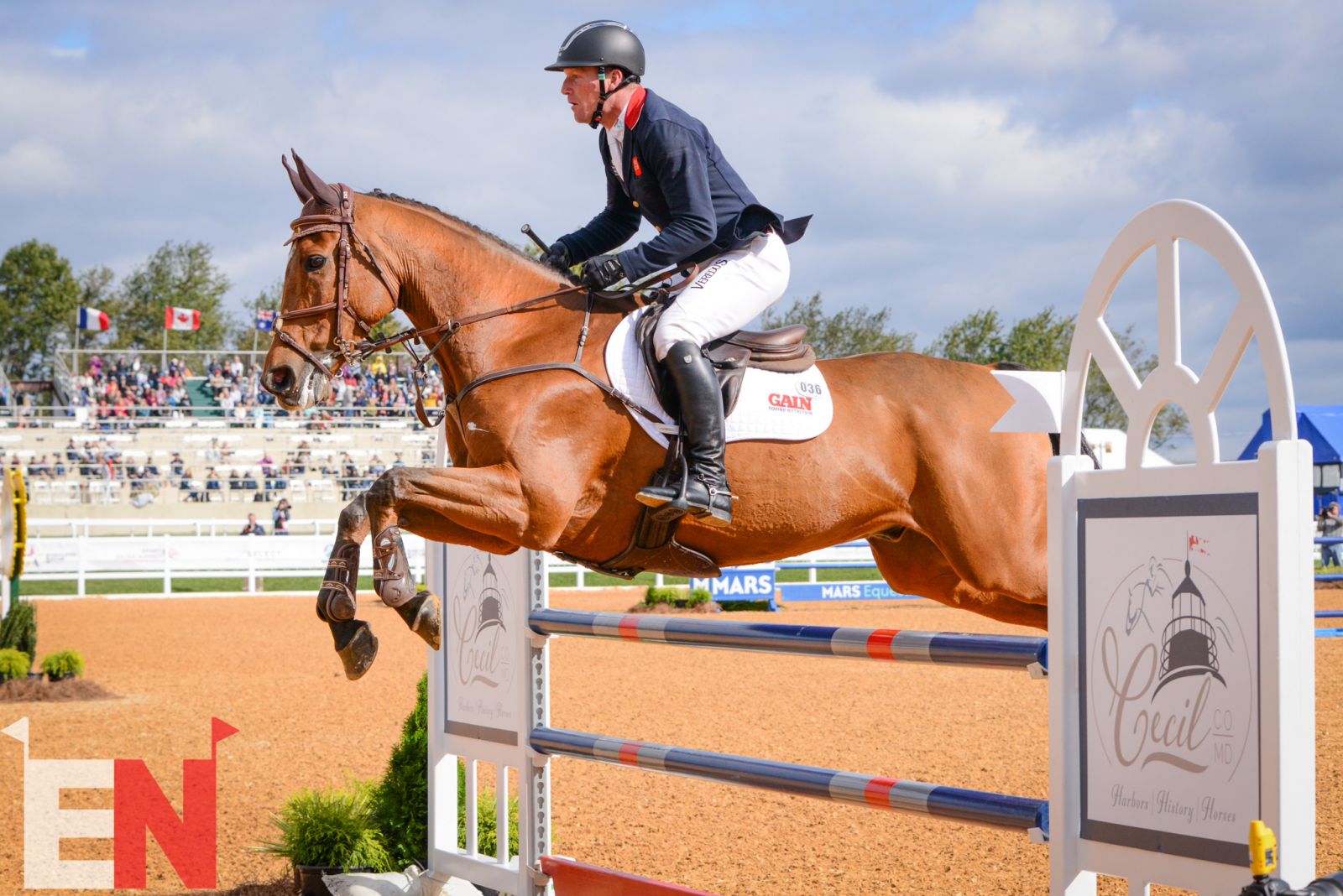 Winding up third with a catch-ride on Juli Hutchings Sebring’s Ulises is Great Britain’s Oliver Townend, who campaigned the 14-year-old Spanish gelding by Fines through the Advanced/4* level previously. Juli reached out to Oliver to gauge his interest in taking the ride for the weekend, and he eagerly agreed to reunite with his old friend. He visited Juli’s Appleton Equestrian earlier this week (Juli is based just around the corner here in Elkton) to reacquaint with Ulises — and they certainly took little time to get to know each other again as they became just the second pair in the division to end the weekend on their dressage mark of 29.4. Thanks to their clear jumping efforts, Oliver and Ulises were able to gradually move up after starting in 10th place following dressage. Oliver and Ulises also won Best Turned Out Horse & Rider for the CCI3*-L division.

You can review full final scores from the CCI3*-L here. We’re just about set to kick off the 5* finale at 1 p.m. EST, so stay tuned for more from the final day at Maryland 5 Star! 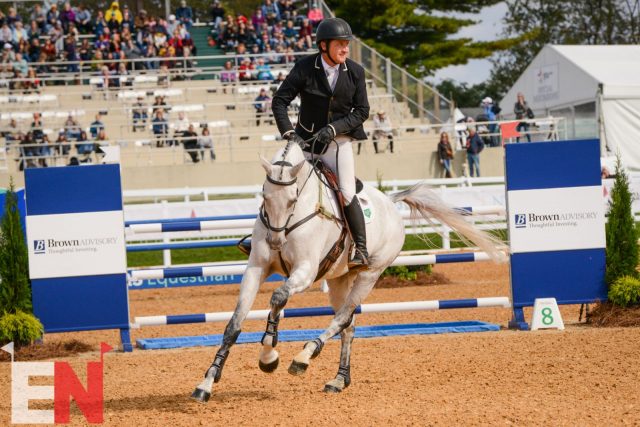 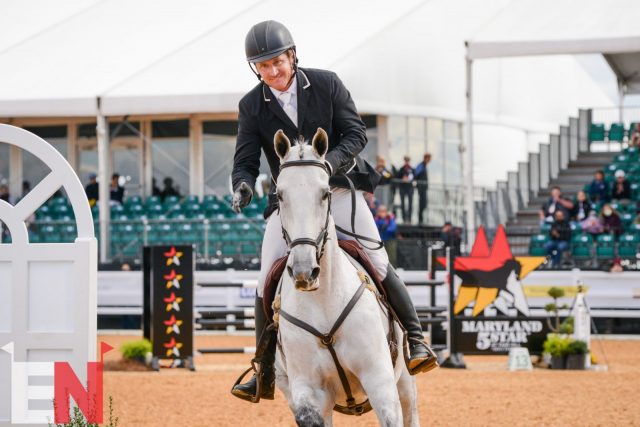 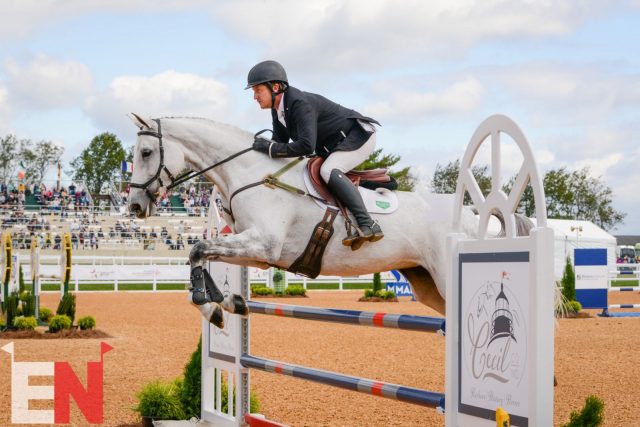 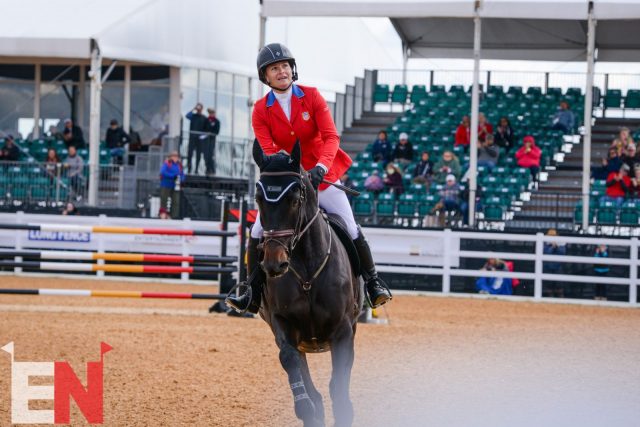 Hannah Sue Burnett checks the scoreboard after crossing through the finish flags. Photo by Abby Powell. 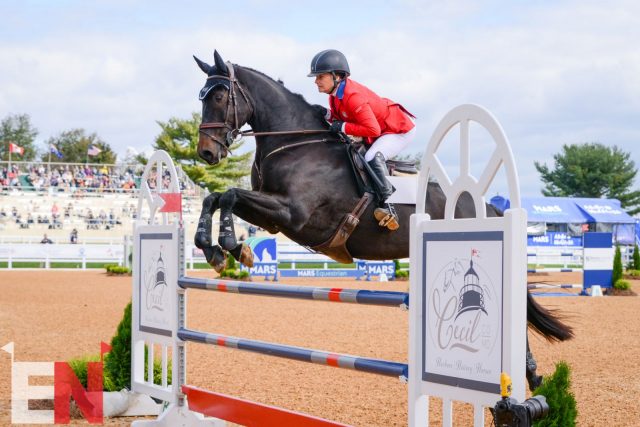 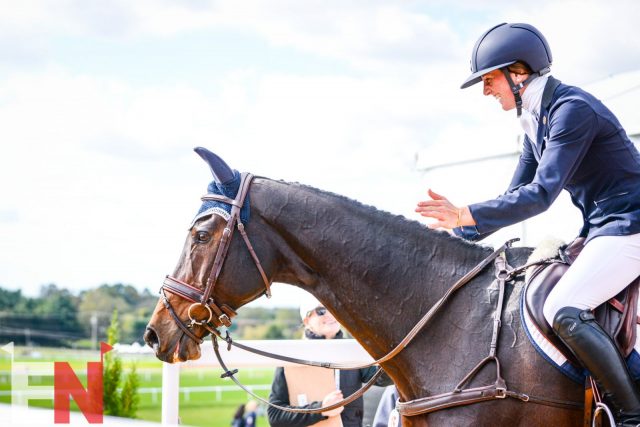 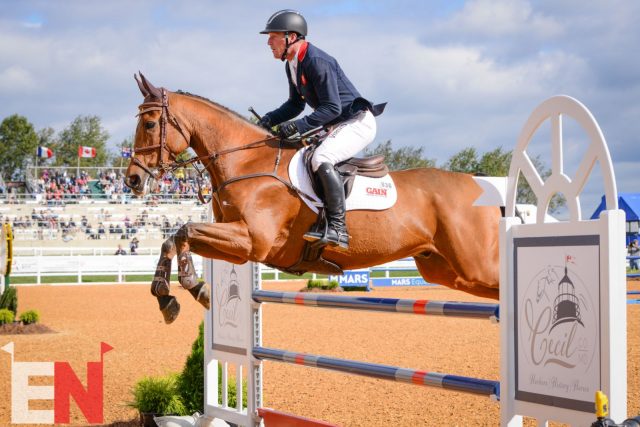 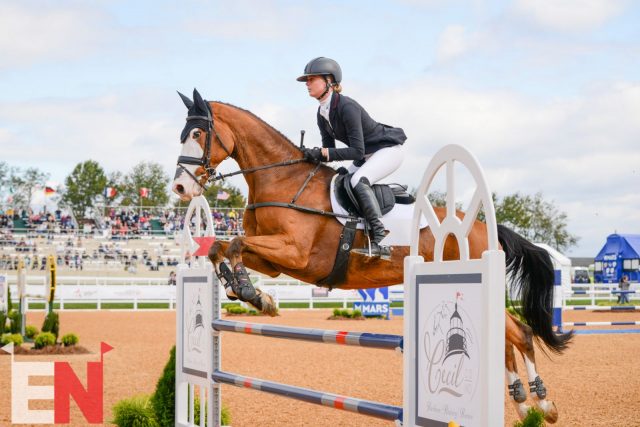 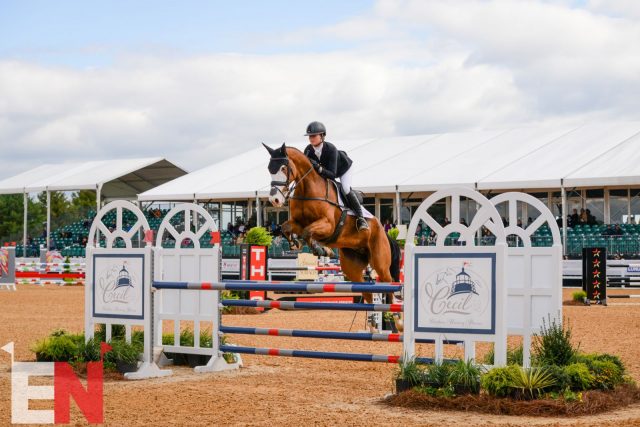 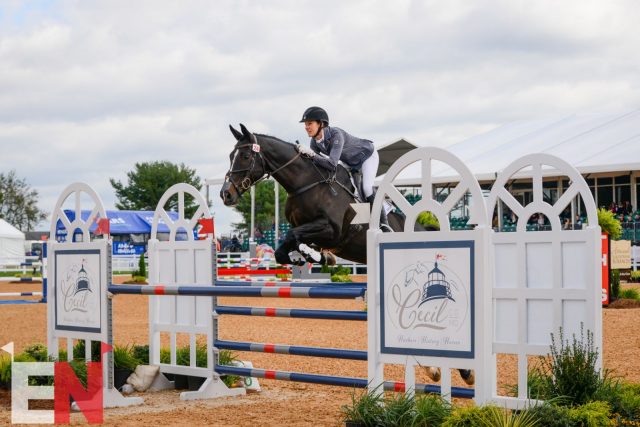 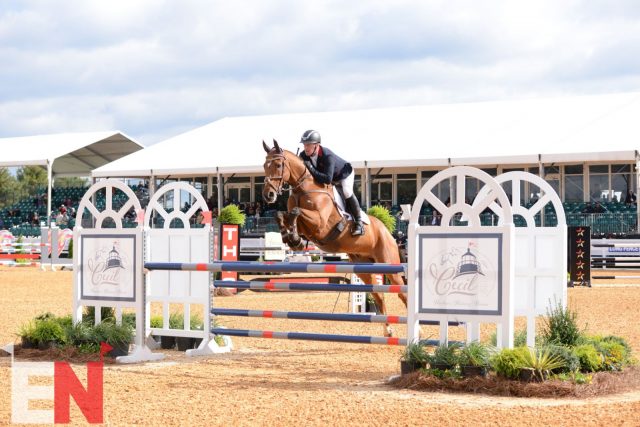 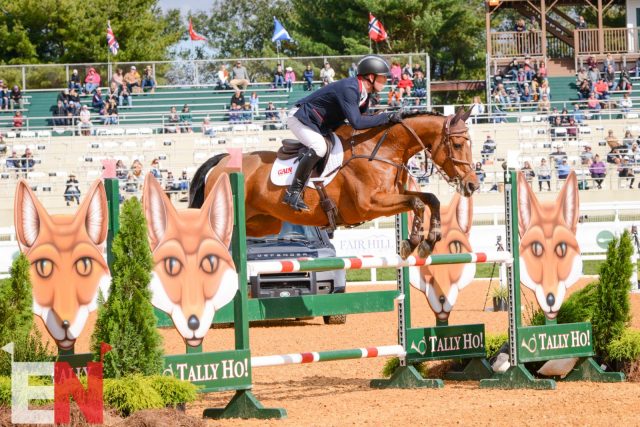 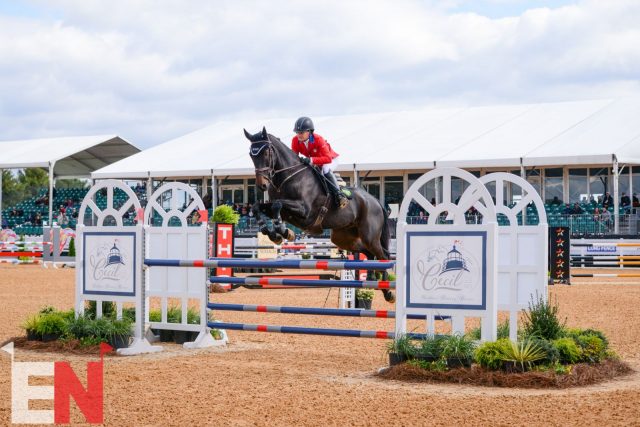 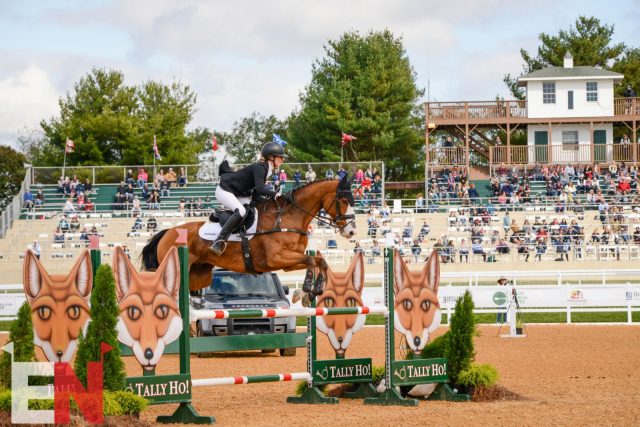 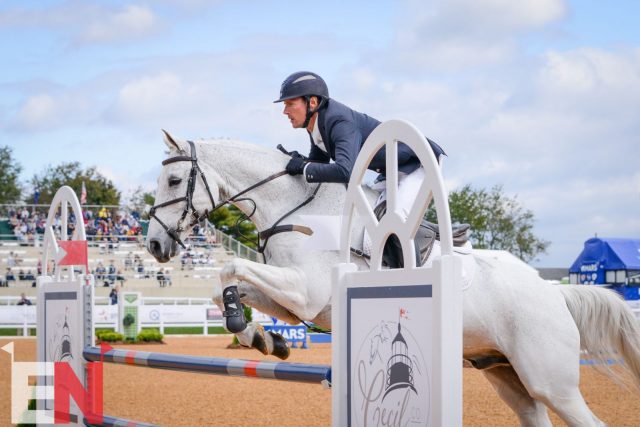 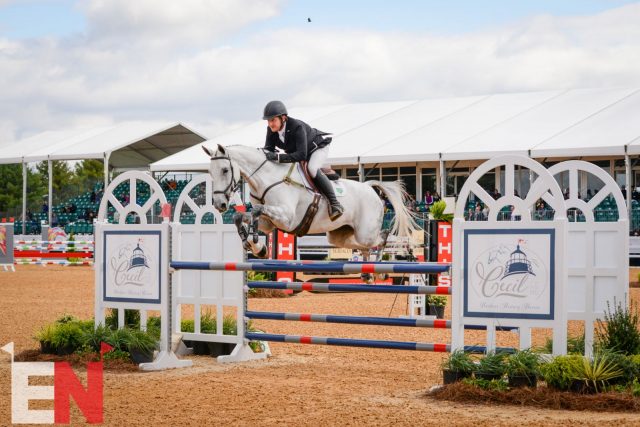