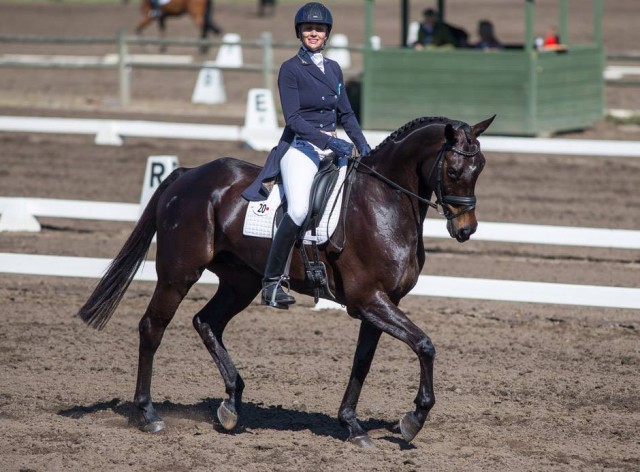 Frankie Theriot Stutes is all smiles on the Chatwin Group's Chatwin to lead the CIC2*. Photo by Anita Nardine.

When someone tells you that you can’t have it all, point them in the direction of eventers. This weekend marks Frankie Thieriot Stutes’ return to FEI competition with the Chatwin Group’s Chatwin since having her first child, and we’re pretty sure he’s got some pastries in his future.

Frankie and her husband Mike welcomed son Drake into the world almost six months ago. Tamie Smith campaigned Chatwin, an 8-year-old Oldenburg gelding, for Frankie during her pregnancy and following Drake’s birth. But this weekend, Frankie’s back in the irons — and back in first with her dark and handsome partner. (In case you were curious, Drake is the most incredibly chill and adorable kid, with eyes and fashion sense that melt even non-baby lover hearts.)

Chatwin hasn’t placed lower than second in any competition since October 2014, and Frankie came out swinging at Galway, laying down a dressage test that score 40.0 for a 9.7-point lead in the CIC2* over Barb Crabo and her own Over Easy, a 10-year-old Swedish Warmblood mare that scored 49.7. Canadian Nikki Ayers and Andree Stowe’s Rubicon, a 12-year-old Swedish Warmblood gelding, put in a solid test for third on 51.7.

“A couple years ago this environment would have been intimidating for both of us, but we have come far in our relationship and it was great,” Frankie said. “Tamie really helped give him more experience last year while I wasn’t riding. I think it is a tough course tomorrow. I plan to have fun and look forward to it.”

As in the three-star, the stadium course wasn’t full of double clears. In fact, there were only three clear trips in the division of 15, with rails falling all over the course. Frankie and Chatwin secured the overnight lead by being one of the three double clear rounds. 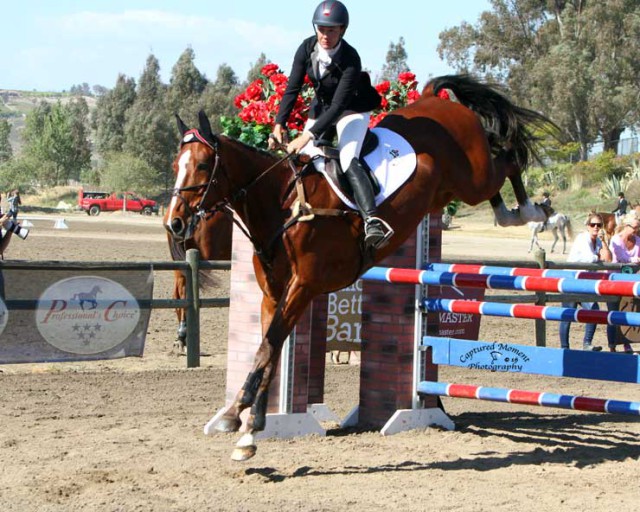 Tamie Smith and Graceland’s Lagos Star moved from fifth to second on 53.6 with their clear round, and Kelly Pugh and David Garrett’s Corazon jumped from seventh to third on 54.2.

Tamie and “Legos my Eggos” have really started to gel this year. She took over the ride on the 9-year-old Oldenburg gelding at the end of last year and came out for 2016 with a bang, placing second in their first outing at Intermediate and then winning at Fresno’s CIC2* in February.

Kelly and Corazon, a 9-year-old Dutch gelding, are also a pair that seem to always be in the top three, and their partnership is young as well. Keep an eye on Chatwin, Lagos Star and Corazon this year!

In the CIC*, first through third places remained unchanged after stadium, though dressage leader Jennifer Wooten-Macouzet extended her lead on Lauren Billys’ former ride, Ballingowan Ginger with a clear round to sit in first place on 42.3. It’s a pleasure to see Ginger, a 14-year-old Irish Sport Horse mare owned by Jordyn Horwitz, out competing again and performing so well, as well as to see Jennifer back in the FEI divisions.

“The course was a true show jumping course; you really had to keep your balance,” Jennifer said. “The cross country looks straight forward. I spent last year out of the tack, and this will be my second ride on this horse. I plan to ride really forward tomorrow and am excited to get out there.” 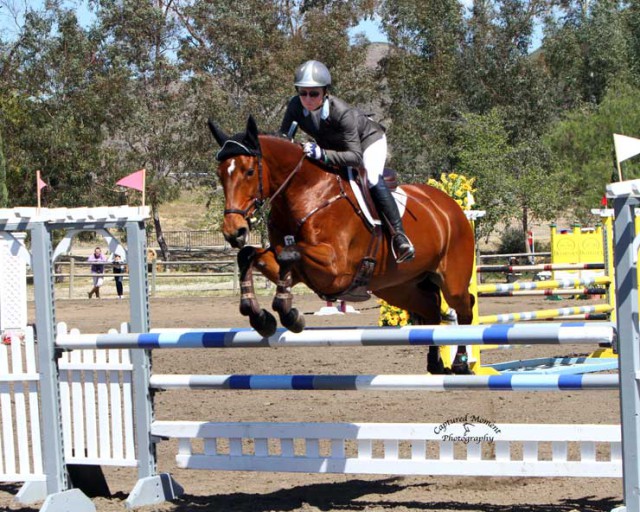 Emilee Libby and her own and Linda Libby’s Jakobi sit in second in the CIC* on 47.2. Green to this level, Jakobi, a 7-year-old Belgian Warmblood gelding, didn’t seem to mind the atmosphere, the test or the jumps, hitting only one rail to remain in second after stadium.

Kimmy Steinbuch and Ruth Bley’s En Vogue are in third on 47.8 in the 11-year-old Hanoverian mare’s first FEI competition. Kimmy took over the ride from Ruth last year and quickly became a force to be reckoned with at the Preliminary level. Young Rider Kelsey Holmes had a double clear round to move her into fourth place on 49.4 with her own Heart of Gold SE.

Today’s cross country features a jump dedicated to Ian Stark and some fun with water complexes,  terrain and good gallop stretches. Don’t forget you can watch the action LIVE from Galway Down at rideonvideo.net. Check back later today for our final scores and highlights from the exciting finale. 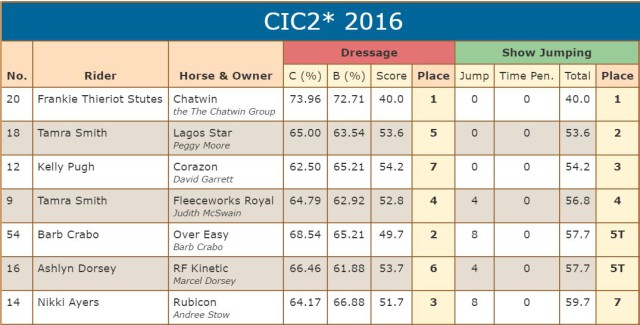 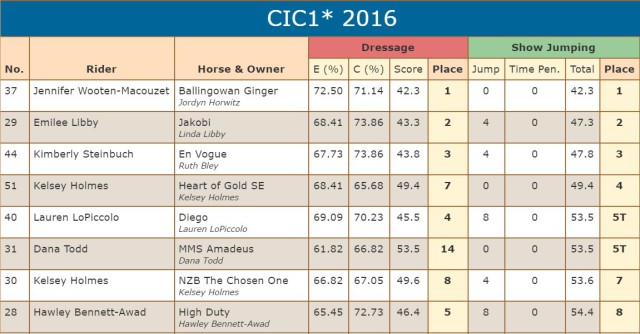