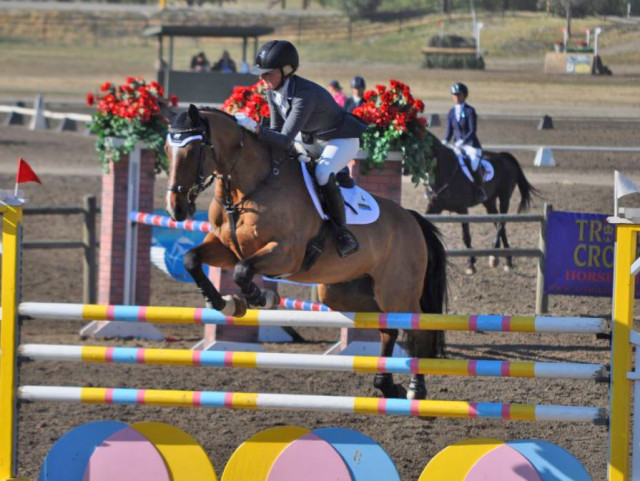 Mackenna Shea and Landioso are your overnight leaders after dominating dressage and getting through stadium. Photo by Lisa Takada.

The national day of funny pranks marked the opening of the spring event at Galway Downs, featuring more than 500 horses in multiple divisions. With many of the entries in the FEI divisions looking for their final Rolex prep and a Young Rider team qualifier, we are midway through the spring season in Area VI and the weather couldn’t have been nicer.

CIC dressage was held in two rings to accommodate the large classes, even with the CIC3* stadium scheduled to begin in the afternoon. Despite a small entry list of eight riders, the CIC3* is packed with top combinations ready to set the tone for the rest of their spring season.

For Mackenna Shea and Jordan Linstedt, today was especially moving as it marked their first return to FEI competition since both their horses underwent colic surgery last summer within a week of each other.

Mackenna and her own Landioso, a 14-year-old Bavarian Warmblood gelding sourced by Michelle Pestl, set the tone for the day by laying down a fluid dressage test to deliver a 43.3. That score gave her a commanding lead over the rest of the field, and coming off a win in the Advanced division at Twin Rivers, the pair is back on track for Rolex.

“I felt pretty good (about the test),” Mackenna said. “I didn’t have a long warm up, but he is really good on the flat. We have been working on his rideability.” 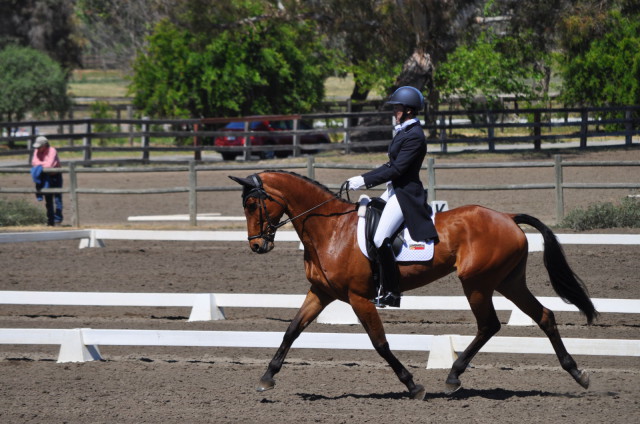 Tamie Smith and Dempsey strutting their stuff in his first CIC3*. Photo by Lisa Takada.

Other Rolex-bound competitors include Jennifer McFall and High Times, a 12-year-old Holsteiner gelding owned by the High Times Syndicate, who came second after dressage on 51.9. They won their last outing at Advanced, with a blue ribbon coming at Fresno. Working hard but also giving “Billy” time to just be a horse in the off season seems to have worked in the pair’s favor, with definite improvements in their dressage scores.

Barb Crabo and her own Eveready, a 17-year-old Swedish Warmblood gelding, also had a solid test to round out the top three on 52.8 after the first phase. “After the second or third movement, I was really able to push and get a lot out of him,” Barb said. “He really got his act together today, as he was a bit frisky at his first show (of the season), and I was really happy with him.”

But this was not to be a dressage test. With a new course designer for stadium at Galway Downs in Michael Roy Curtis and a windy desert setting, only Bunnie Sexton and her own Rise Against, a 17-year-old Thoroughbred gelding, went double clear (we’re sensing a trend here — “Ecko” is definitely a freak of nature!).

Tamie Smith started the division on Dempsey, an 8-year-old Dutch gelding owned by the West Coast Dempsey Syndicate that is contesting his first CIC3* at Galway. A clear round with only time penalties made the course seem eminently doable, especially since Tamie and Dempsey made it look like a gorgeous hunter round. Andrea Baxter and her own Indy 500, who are prepping to go east to Jersey Fresh, had two uncharacteristic rails. 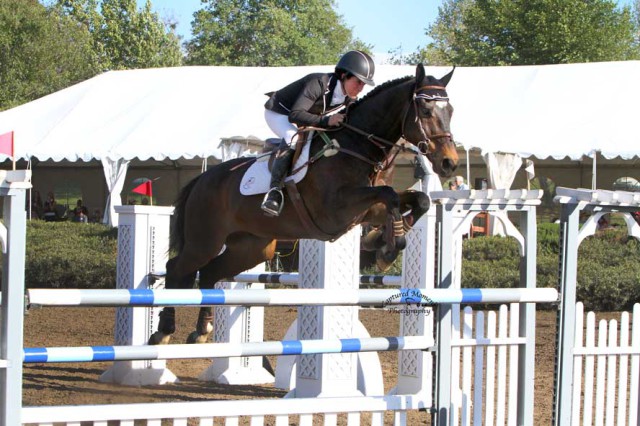 Barb Crabo and Eveready are on their way to Rolex. Photo courtesy of Captured Moment Photography.

Barb Crabo and Eveready put in a clear round with three time penalties to move into second on 55.8, and Mackenna and Landioso held on to the overnight lead despite three fallen rails for a score of 55.3. Tamie Smith sits in third on Company Twizted Syster’s Twizted Syster, a 10-year-old Irish Sport Horse mare. “Chloe” jumped beautifully over the course only to pull the final rail.

“I thought the show jumping course was great; it was really challenging,” Mackenna said. “You had a good balance of fences that flowed. Even though we had several rails down, it was my fault. I plan to ride forward but careful tomorrow.”

Stadium proved tricky for all the FEI divisions, causing shake ups across the boards. Today brings the Ian Stark-designed cross country course, which has a nice blend of natural looking obstacles, including an intimidating angled-skinny-brushes combination over water, the patriotic fence two, and a fun water combination that includes Galway’s beloved Shamu! 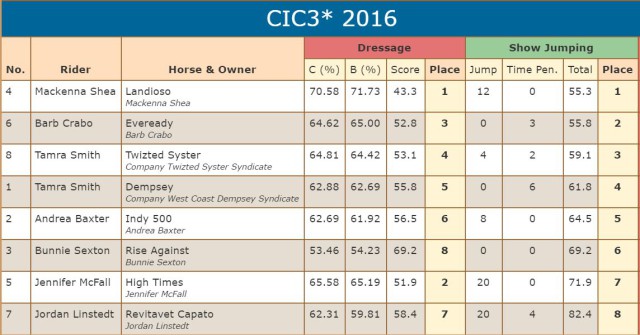