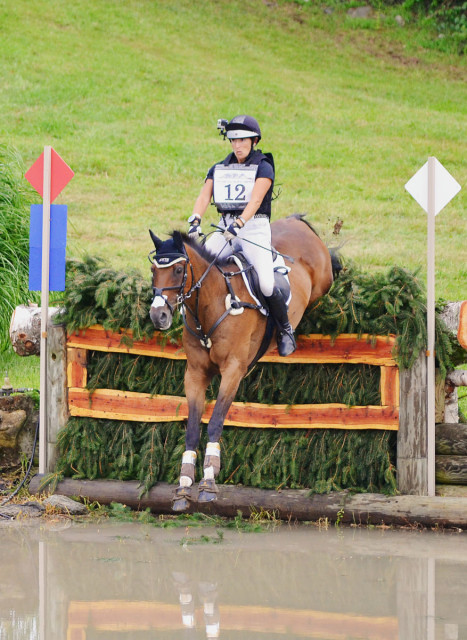 Laine Ashker hadn’t planned to go for time with Anthony Patch, the reigning Millbrook Advanced winner, but she put in the second-fastest trip of the day to pick up 4.8 time penalties and take the lead on 31.4. The honors for fastest trip go to Phillip Dutton and his new ride and Blenheim CCI3* grant recipient Fernhill Cubalawn, who picked up 4 time penalties to move up from equal 10th place on a score of 32.8. Phillip also holds third place on Fernhill Fugitive, who had six penalties to tie with Buck Davidson and Copper Beech, who had 7.2 time penalties, on scores of 33.8.

Katy Groesbeck and Oz the Tin Man enjoyed a nice jump up the leaderboard from 14th to fifth place on 37.4 after picking up 6.8 time penalties. Allison Springer and Arthur, who were running for the first time since Rolex, had an easy prep trip for Burghley, jumping clear with 8.8 time to move up from 13th to sixth on 38.8. Buck has another ride inside the top 10 with The Apprentice, who had a very bold trip through the water to jump clear with 10.8 time penalties to drop for sixth to seventh place on 38.9. 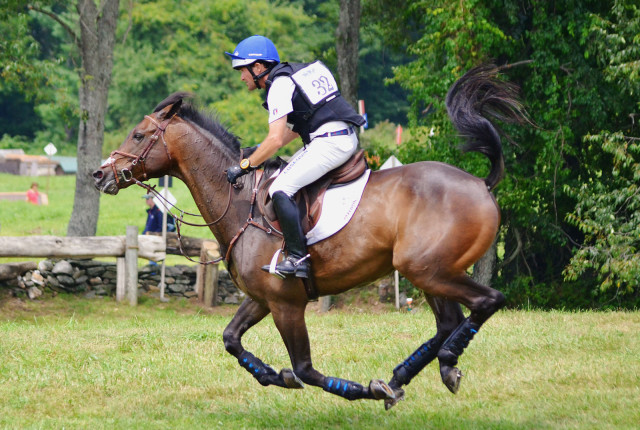 Covert Rights enjoyed his first cross-country run at Advanced level after an extended break, jumping a smooth round with Colleen Rutledge after she said he bolted off with her in warmup. Colleen and CR picked up 10.8 time penalties to to move from 10th to eighth place on 39.6. Boyd Martin hammed it up for the crowd after coming through the water with Master Frisky; he has a large contingent of syndicate owners here this weekend cheering him on, and they picked up 10 time penalties to move from 15th to ninth. Boyd and Steady Eddie and Sharon White and Under Suspection are tied for 10th place on 41.3 after coming home with 10 and 13.2 time penalties respectively.

No one made the time on a day when the rolling Millbrook hills took their toll, and the heavy rains that fell yesterday afternoon made for deep footing in certain parts of the course. Tremaine Cooper’s Advanced course rode very nicely overall, with problems primarily cropping up at the combination at 8abc, a gate to a “half keyhole sort of skinny thing,” as Kate called it, to a chevron. That’s where overnight leaders Sharon White and Wundermaske ultimately retired after a refusal. Sharon actually bashed her knee on the skinny, which is carved into a tree trunk, but was thankfully sound enough to pilot her second ride Under Suspection later in the division. 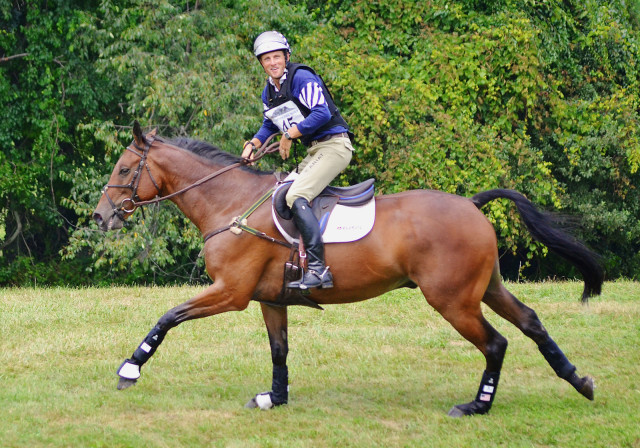 Boyd Martin salutes the crowd at the water jump aboard Master Frisky. Photo by Jenni Autry.

In addition to Sharon and Patch, seven other combinations had a runout at 8, with the big chevron at the C element proving particularly problematic. Nora Battig had the only fall in the division when she parted ways with Steppin’ Out after he jumped huge over the chevron, perhaps not anticipating the drop on the back side. Though she tried desperately to hang on, she just couldn’t quite save it. Thankfully, she was up right away and OK.

Problems also cropped up earlier in the course; Katie Wherley retired Mr. Indiscretion at fence 4, an airy table built under a gazebo, after a stop there. Three combinations picked up a refusal at fence 5, an open corner set on an angle over a ditch. Courtney Cooper was the only rider in the division to be eliminated on refusals, and she picked up her first with Who’s A Star at this fence, followed by a second at the tricky combination at 8 and a third at the keyhole coming out of the water. 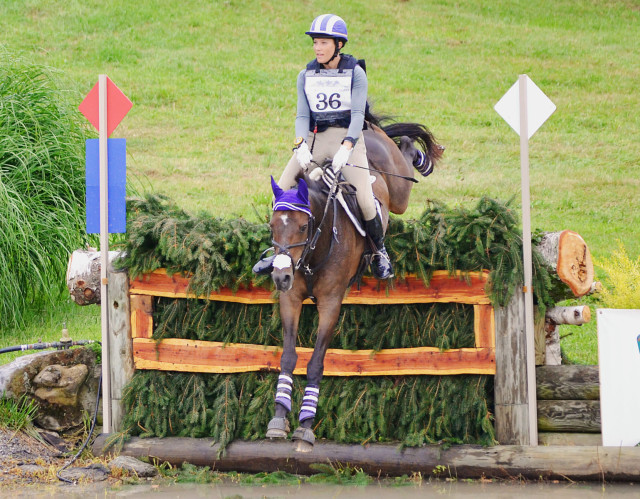 The water at 15abc rode beautifully overall, though we definitely saw a few scrappy rides. Phillip and Atlas received a huge cheer when the horse scrambled up the bank and gamely hopped on through fence 14 just before it caught out four combinations with refusals">the key hole, which was very similar to the way Alyssa Peterson and Music Man II rode through — also to huge cheers. Though the water didn’t cause any problems sans Courtney’s stop, the big corner at fence 14 just before it caught out four combinations with refusals, and Liz Riley and It’s The Truth picked up a second stop there before successfully taking the long route.

The only other refusal on course came when Jessica Bortner-Harris and Win the War had trouble at fence 11, a combination of two angled skinny ramps. With the dust settled, there were a total of 20 refusals and one rider fall out of a division of 45 horses. You’ll see on the live scores that Callie Evans and Glendening Avis are listed as disqualified. I saw them go through the steps at fence 19 late on the course and am still trying to verify exactly what happened; they were sitting in equal fourth place overnight. (Update on Callie and Avis added below.) 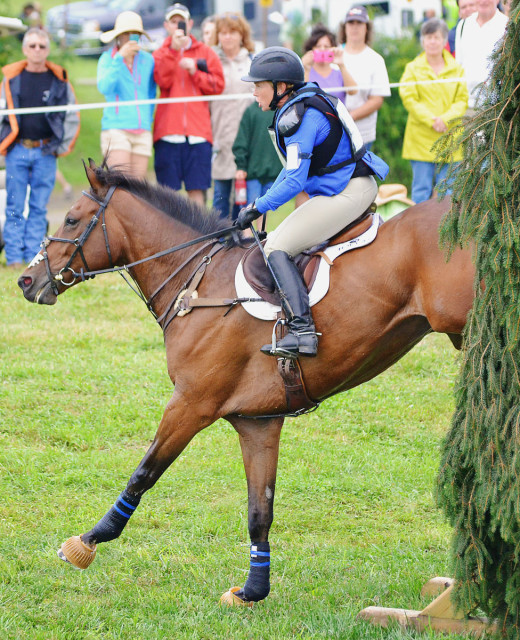 Though the forecast threatened storms, it turned out to be a beautiful, overcast day with cool temperatures, creating ideal cross-country conditions for the horses. Many thanks to event secretary Sharyn Antico for helping me get a printout of the fence analysis to bring you this report. I still have much more to bring you from cross-country day at Millbrook, including photos, videos and a new edition of Who Jumped It Best? Thank you to the organizers, volunteers, fence judges, score runners and everyone who helped to make the day such a great one. Go Millbrook.

Update 10 p.m. EST: Callie Evans has notified us that she was disqualified upon completing the Advanced cross-country course with Glendening Avis after officials spotted what they believed to be a spur rub on the mare’s left side. Callie appealed to the ground jury, as she believed the mark in question was too low to have been caused by her spur; her appeal was unsuccessful. 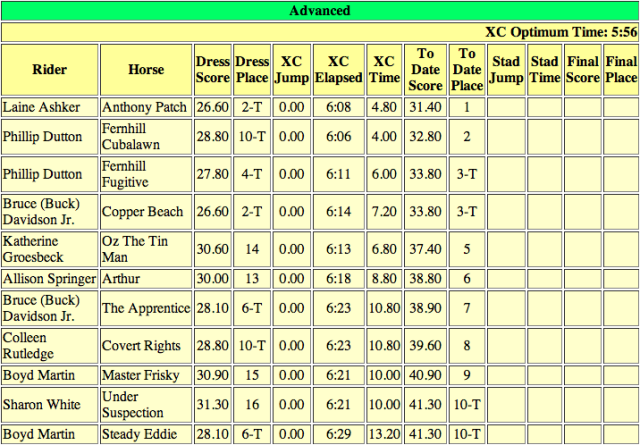