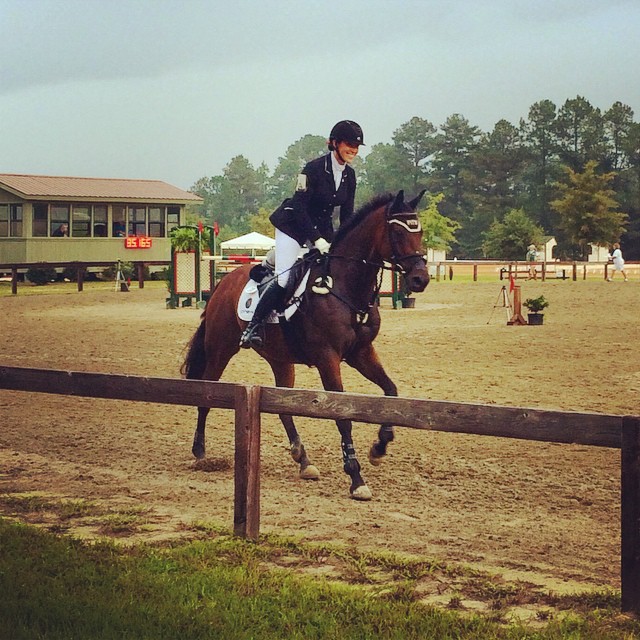 Laine Ashker continued her winning ways with a victory in the Advanced division at Five Points this weekend. Laine is working her way toward Texas, where she will compete for a repeat win in the Adequan USEA Gold Cup at the American Eventing Championships, and with the results she’s had this summer she should be looking ahead to the event with confidence.

How about Maggie’s predictions for the Advanced division this weekend? Well, once again she’s proven that her database is nothing to sneeze at. Maggie statistically predicted that Laine would win at Five Points this weekend, noting that she and Anthony Patch seem to favor the Advanced Test B. Going by their past performances at the level, Maggie predicted that Laine and Al would finish somewhere in the vicinity of a 41.2 penalty score. Laine beat that prediction by scoring a 40.2, adding eight time penalties on cross country and one rail in stadium today to clinch the win.

Predicted to finish second, Sharon White’s ride, Under Suspection, was withdrawn after dressage, but Pippy’s stablemate, Wundermaske, stepped up to the plate to carry Sharon to that second place finish. How’s that for serendipity? Sharon and “Patch” finished in second with 41.6, followed by Boyd Martin and Steady Eddie, who were Maggie’s sleeper pick for the weekend.

Boyd also pulled out fourth place with Master Frisky (nothing like coming back from WEG to get right back to the chaos, right Boyd? Are you even over the jet lag yet?). Will Coleman’s Obos O’Reilly rounds out the top five on a score of 50.4. Marc Donovan’s show jumping course took its share of victims, with only Boyd and Steady Eddie turning in a double clear round. Ryan Wood and Fernhill Classic left all the poles up and came home with just one time fault. 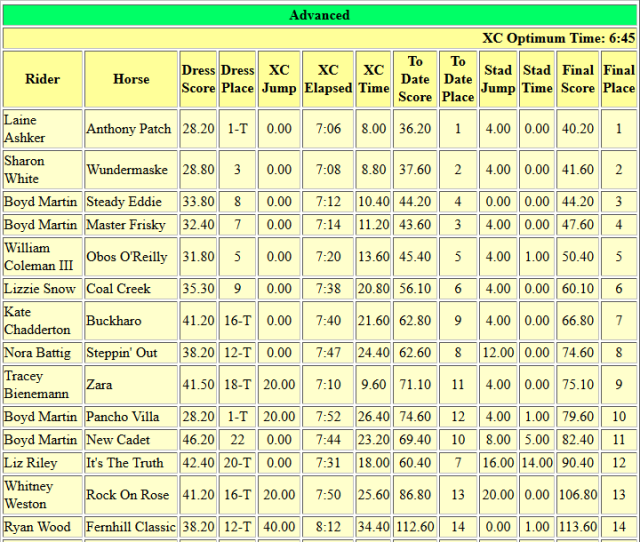 Five Points also had a busy Open Intermediate division running, where Lauren Kieffer and Veronica won decisively on a score of 30.8, adding just .4 time to their score on cross country. Michael Pollard and Walterstown Don, what looks like a new ride as of July for Michael, picked up second place in their first Intermediate together.

Lauren Kieffer posted on Facebook that she wanted to channel her inner Hannah Sue Burnett this weekend, and that she did, also taking third place aboard Landmark’s Monte Carlo. Ryan Wood with Woodstock Bennett and Sharon White with Severn Sky complete the top five. 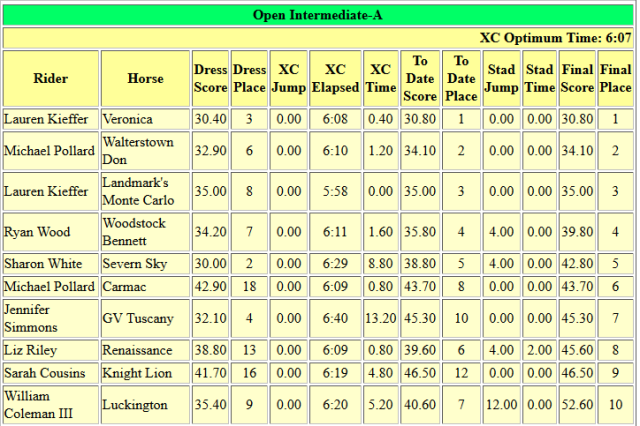 Over on the other side of the country, both Aspen Farms and Copper Meadows have wrapped up as well. Aspen Farms hosted the final leg of the USEA Adequan Gold Cup tour with an Advanced division, and Maggie predicted Jordan Linstedt and RevitaVet Capato as the winners, but four jump penalties and some time on show jumping today proved to be influential. Jordan dropped to second behind eventual winner Rebecca Buehler and Brighton.

Copper Meadows also hosted a CIC3* this weekend, sponsored by ECLAP. A great addition to a bustling west coast schedule, the CIC3* division attracted some solid competitors. Maggie also correctly predicted the winner of this division with Kaitlin Veltkamp and Flashpoint D. This pair took the lead after show jumping and held onto it with a quick cross country that saw four time faults. Angela Grzywinski and Novelle picked up second place after two nearly flawless jumping rounds. Leah Breakey and Master Plan moved from fourth to take home third place after turning in a double clear show jump round.

Pam Fisher and Rigby will take home blue in the Western Underground CIC2*, followed by Tamie Smith and Twizted Syster and Alex Ahearn and Mai Baum. Pam moved Rigby up to Intermediate this year, and this is the Oldenburg gelding’s first CIC2* win on his second outing.

Meanwhile, Twizted Syster is looking like a potential Advanced mount for Tamie, as the talented mare keeps answering questions and improving her placings as time goes on. Many congratulations to Tamie; she’s certainly got one to keep your eye on for the future!

Tamie also will take home a blue ribbon with a win in the State Farm CIC*, piloting Sunsprite Syrius to finish on his dressage score of 42.1. Syrius is coming off of a CCI* win at Rebecca Farm, and this is his second CIC* win – another solid citizen for Tamie and her team.

Our good friend, Frankie Thieriot and Chatwin also finished on their dressage score of 46.0 to take home second place. Chatwin is a German Warmblood and this was Frankie’s first CIC* with this particular horse, so she is surely thrilled with the results. Julie Anne Boyer and Lady Zeyva picked up third place, which looks to be their best finish at this level to date. 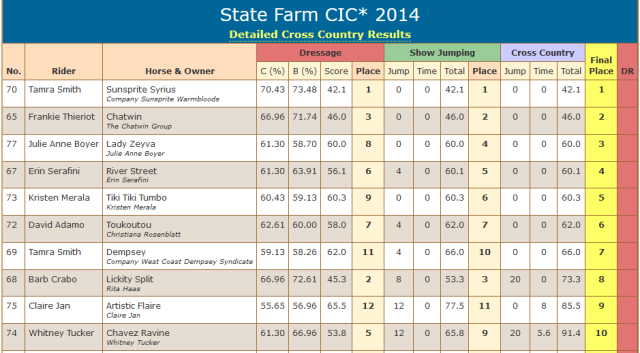 AEC-bound Matthew Brown also had another winning weekend, picking up wins in both the Advanced and Intermediate divisions with Super Socks BCF and Happenstance, respectively. Matt is currently running an auction through his training page on Facebook to raise money for his trip to Texas. Click here to visit and participate to help bring some more west coast talent to the AECs.