Laine Ashker is looking ahead after withdrawing Anthony Patch from the holding box at Rolex due to an abscess. She’s decided to return to the American Eventing Championships in Tyler, Texas, to defend her Adequan USEA Gold Cup title. In her newest guest blog, Laine tells us the rationale behind her decision to target the AECs again this year. 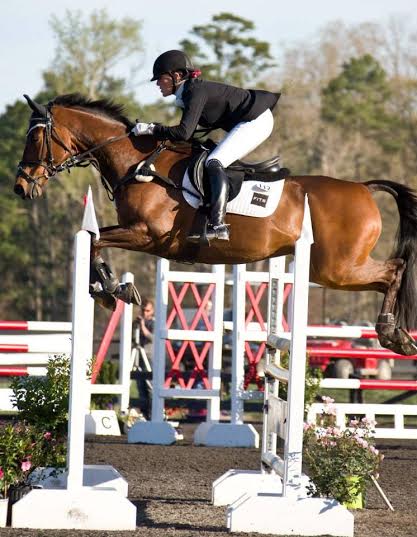 Laine Ashker and Anthony Patch at the Fork. Photo by Mike McNally.

It seems like it’s been ages since I galloped across the Red Hills CIC3* finish line after an exhilarating round across the country aboard Anthony Patch. After the let down of Rolex when Al came up with an abscess the week of the event, I began to channel my energy into my younger up-and-coming mounts and let Al have the time he needed to get back on track.

With the pressure off from the World Equestrian Games selection, I am able to freely pick and choose his summer/fall schedule and thoroughly enjoy my horse and our partnership without the stress of constant vet exams, constant training sessions or rigorous fitness schedules. Don’t get me wrong — if I had the chance to represent my country in France this summer, I’d be the first one to don the cashmere beret and pack Al’s Louis Vuitton luggage set, but since that is not written in the stars for us, I’d like to think heading back to Texas at the end of September comes in at a close second.

With the American Eventing Championships being my newfound goal for this year, I plan on doing everything within my power to ready the little bay for a consecutive win at our national championships. His first competition back will be this weekend at Maryland Horse Trials in the Preliminary division followed by the Advanced at Millbrook Horse Trials in beautiful upstate New York in the beginning of August. If all goes as planned, I would love to have one more Advanced run at the Carolina Horse Park in the beginning of September, which will keep both Al and myself fresh and on point for the championships in Tyler.

As much as I would love to win again in Texas, I do realize that horses have a funny way of teaching us as their handlers a great deal of patience, perseverance and humility. As I have grown older in this sport, I have learned that in the long run, it’s not the results that matter but the memories that are made throughout these times that shape us as people and as competitors.

One thing is for sure — I will never forget the smile that decorated my grandfather’s face as I exited the ring after being named the national champion. That my friends, is worth all the blood, sweat and tears it took to achieve such an honor. Until next time folks, sit back, kick on and keep your eyes on the prize! See you in the galloping lane!