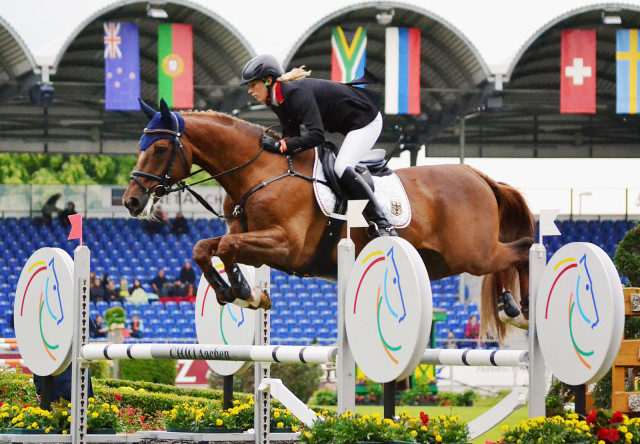 Sandra Auffarth and Opgun Louvo at Aachen in 2013. Photo by Jenni Autry.

Sandra Auffarth and Opgun Louvo held their morning lead from dressage thanks to a double clear show jumping effort this afternoon in the CICO3* at CHIO Aachen. Time penalties proved to be very influential, with just nine riders jumping clear and inside the time allowed of 84 seconds. Tim Price and Wesko, who are coming off a win at Luhmühlen CCI4* last month, moved up from eighth to second place after jumping one of those clear rounds, staying on their dressage score of 39.8.

Ingrid Klimke and FRH Escada JS moved up from 10th to equal third place after also jumping double clear to stay on 40.2, tied with Thomas Carlile and Quiro Hoy, who jumped clear with one time penalty to move from seventh to fourth place. Clark Montgomery and Loughan Glen pulled one rail at fence 6 to drop from third to fifth place on 40.8.

Joseph Murphy and Electric Cruise, Paul Tapner and Kilronan, Peter Thomsen and Horseware’s Cayenne, Andrew Hoy and Rutherglen, Elaine Pen and Undercover, and Harry Meade and Wild Lone — who are hoping to impress selectors this weekend to land a spot on Great Britain’s World Equestrian Games team — also jumped clear and inside the time.

Michael Jung and La Biosthetique Sam FBW pulled an uncharacteristic rail at the second fence and picked up one time penalty to drop from second to sixth place behind Clark and Glen on 41.2. But the German team of Sandra and Opgun Louvo, Michael and Sam, Peter Thomsen and Horseware’s Barny, and Dirk Schrade and Hop and Skip are still handily leading the Nations Cup standings on 124.2. Great Britain and France are neck and neck in second and third places on scores of 136.4 and 137.4, respectively.

Cross country starts at 4 a.m. EST tomorrow morning. It doesn’t look like the live stream will be available according to the broadcast schedule, but if you happen to be awake, it’s worth checking in at this link. In the meantime, click here to take a virtual tour of Rüdiger Schwarz’s cross-country course. Go Aachen. 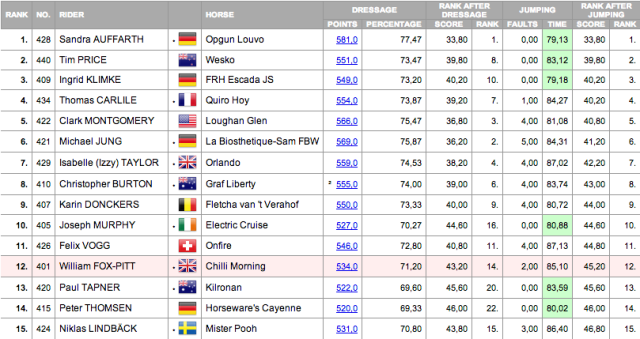