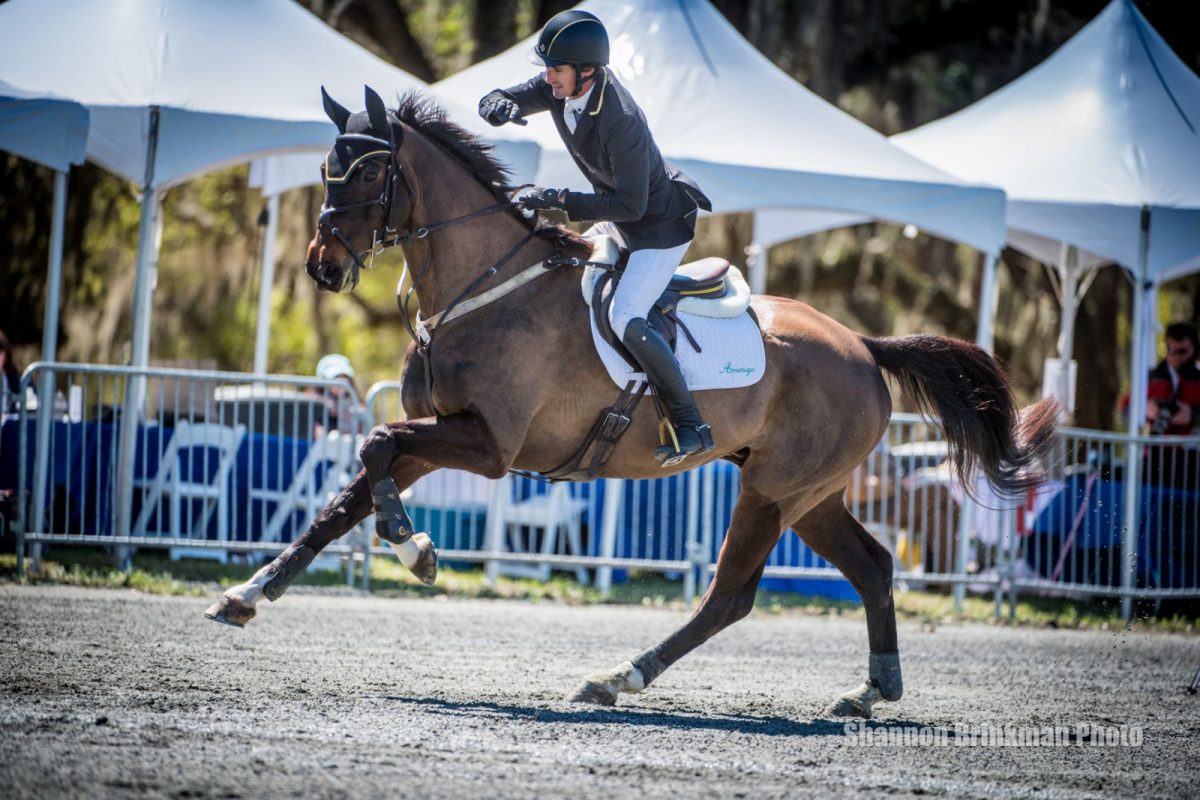 Woods Baughman was around six years old when he accompanied his grandfather to “some horse thing happening over at the horse park” in Lexington, Ky.

That “horse thing” was what was then known as the Rolex Kentucky Three-Day Event, but to Woods and his grandfather it was mostly just a fun activity to do together. Woods had already shown an interest in horses, but this was new territory.

“I was awestruck,” he recalls now.

Of course, three-day eventing wasn’t the sport Woods had his eye on before this. In fact, his earlier ambition had been to be a bull rider. “I was totally convinced,” he said, recounting how he’d “irritated my mom enough” that she finally signed him up for some English riding lessons. “The deal was that if this phase wasn’t over in two years, I could switch to Western and rodeo riding.”

But then, Woods got his first glimpse of cross country jumping.

“All I had really seen to that point was my up-down lessons,” Woods, who is 25 now, laughs. “So to see those horses cruising around like that…I was totally into it.” 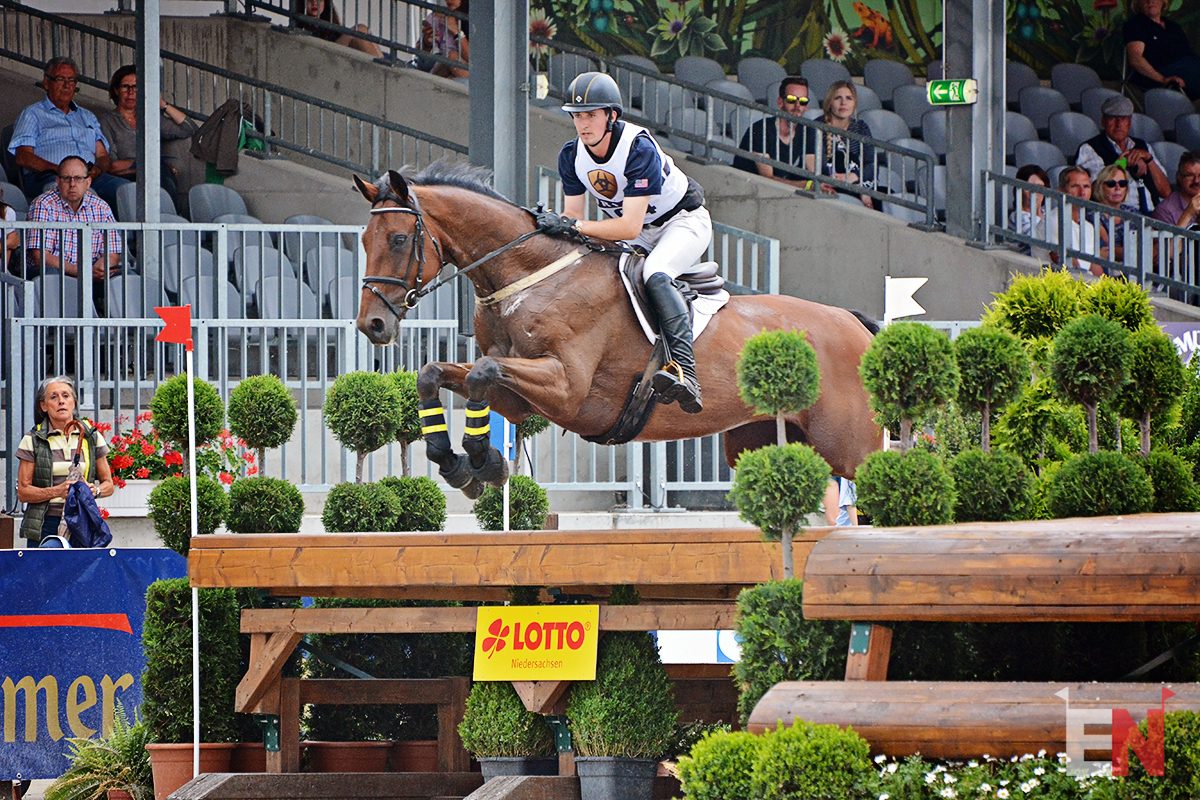 Woods Baughman and Maverick McNamara competing in the CIC3* at Luhmühlen in 2018. Photo by Jenni Autry.

Growing up in Lexington is any horse person’s dream, and Woods was in the right place to learn the foundations of his newfound obsession. He originally started learning the ropes of jumping and eventing at Champagne Run under the tutelage of Maggie Wright – in fact, he’d remain a student of Maggie’s from the up-down days all the way through his first Intermediates.

“I remember a young, quiet boy in the front seat of my truck driving home from the Horse Park one day,” Maggie recalls. “As a conversation starter I talked about Kentucky Three-Day. We talked all the way home and he said he wanted to compete there one day. I am so proud of and happy for Woods as we have had many fun times and miles since in the truck from his first Mini-Trial up through Young Riders and Intermediate Horse Trials. The dream of Kentucky was always there.”

Woods exhibited natural talent that didn’t go unnoticed; in 2014 he represented Area VIII at Young Riders with Truckee Bash and was later named to the USEF Eventing 18 Program. It was through the Young Rider program and regular clinics with then-Area VIII coach Sharon White that made a connection that would shift the trajectory of Woods’ career.

“Sharon was one of the Young Rider coaches, so I rode with her for the first time at Young Rider camp,” Woods recalls. “She used to come up to Louisville about once a month, so I would always drive up to take some lessons. I really liked her and after I made Eventing 18, I was looking for somewhere to go in Florida for the winter.”

Sharon offered Woods a job for the winter, which was more than he’d hoped for – “I was going to be thrilled if I got to be there even a week!” – and soon enough, he was packing the trailer to move south for the upcoming months.

Working for Sharon is an immersive experience. The days are long, the work is tough, but the goal is the same: be the best rider and the best human you can be in pursuit of excellence. “You’re either all in, or you don’t bother,” Woods describes.

It was just the environment that suited the hard-working, competitive young rider – and he’s remained there, eventually stepping up to become Sharon’s assistant trainer and rider, to this day. “I guess I wasn’t anticipating being there for eight years!” he laughs now. “It went from ‘can I stay for one week’ to eight years later really quick.”

Through Sharon, Woods was connected to German Olympian Dirk Schrade, and it was while spending a year in Germany under Dirk’s instruction that he found C’est La Vie 135.

As is often the case with hungry young riders, the first horses one takes to international and upper-level competition are often horses that are safe, “get the job done” types – anything to gain experience on, that you can afford. Woods calls himself lucky to partner with two Thoroughbreds, Truckee Bash and Montesquieu, found through Maggie Wright as he was coming up through the levels.

“They both had hearts of gold and they both tried so hard,” Woods says ruefully. “When I go back and watch the videos, I think ‘there is no price for those horses’. They tried so hard while I was doing so much weird crap – but it does take a little bit of that to get up the levels. I think that’s why a lot of times you see some riders’ first horses aren’t that competitive – they go through accidental torture for awhile!”

Woods and his family sold Montesquieu to fund the Germany trip, sending the experienced Maverick McNamara with him to gain more mileage on. While his original plan was to bring back a young horse to develop, it would be the then-ten-year-old C’est La Vie who stamped his ticket back to the States. “Dirk told me then that this horse would be my five-star horse,” Woods says. 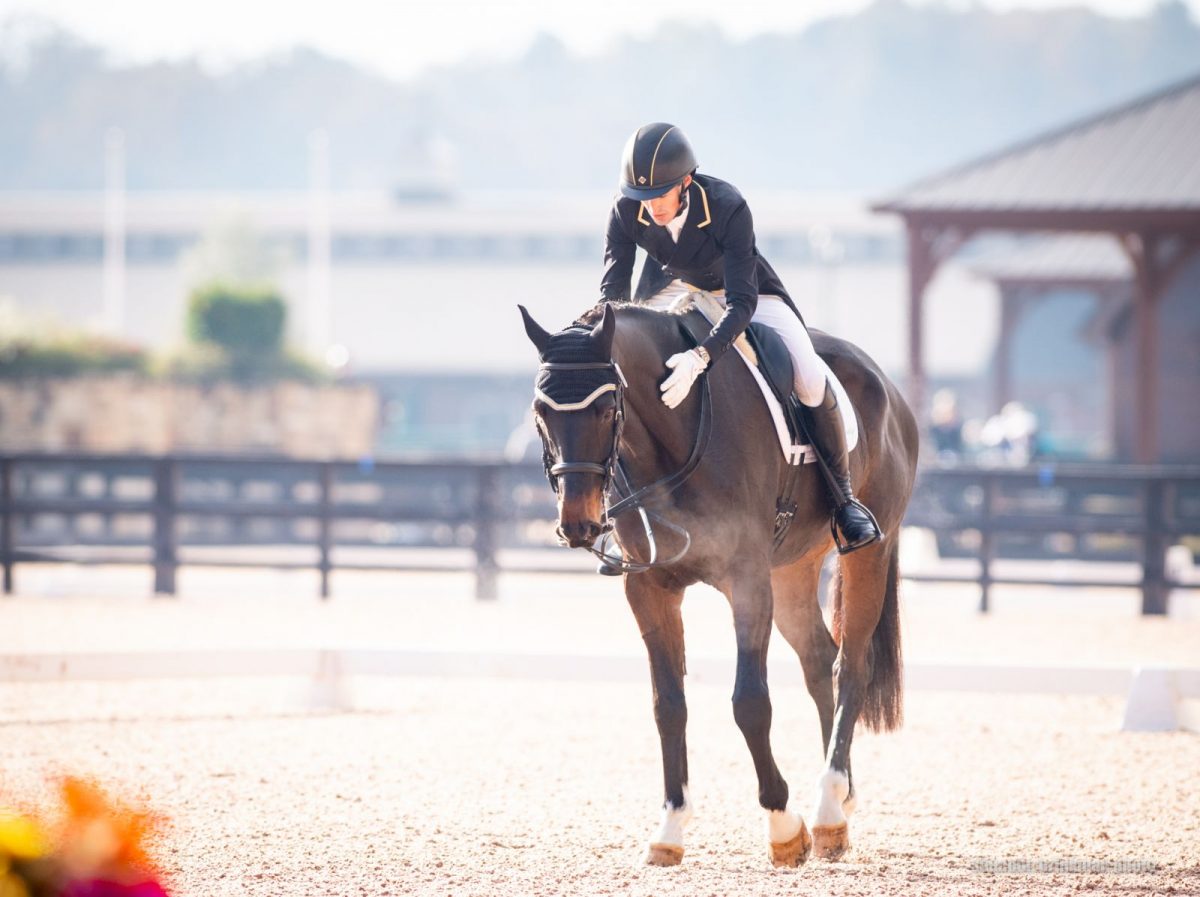 Woods and C’est La Vie 135 at Tryon in 2021. Photo by Shannon Brinkman Photography.

The striking Hanoverian gelding, who is now 14, carries similar personality quirks to his sire, Contendro (after whom he received his barn name of Contendro). Woods describes his relatively quiet “poker face” that can quickly transform into stubborn behavior at the flip of a switch. As he and Contendro got further down the road, he figured out how to stay relaxed and patient. “The more I’ve gotten to know him, the better it’s gotten – but we’ve spent plenty of time just standing in the driveway,” he says. “Everyone laughs because he’s great at shows and no one thinks he ever does anything bad, but they haven’t seen him at home.”

The methodology of patience and relaxation carries over into riding, too. Woods has dealt with growing pains as he’s progressed with C’est La Vie – though they’ve experienced marked success too, winning the USEF CCI3*-L National Championship in 2019 as well as the USEF CCI4*-L National Championship in 2021. “I’ve had to learn how to ride him, with control, without him feeling restricted,” Woods describes. “But where I’m also not flying around like a yahoo. You have to find a happy balance and Sharon’s been really useful for that because she is endlessly patient with us.”

That patience was put to the test last year after Woods experienced what he calls one of the lowest points of his riding career. 2021 started off well enough, but the pair had had a few blips as they stepped up to the Advanced and 4* level, all of which came to grief at the Kentucky 4*-S in April when the gelding hung a leg and pitched Woods over his head. Woods broke two lumbar vertebrae in the process.

Determined to return to riding — and be competitive — Woods rehabbed from the injury and was back in the saddle a few weeks later, but it wouldn’t be the comeback summer he’d hoped for. He and Contendro still struggled with control and, more dangerously, confidence. Woods recalls cross country at Virginia, his first competition back after Kentucky, and adding so many strides to a right-handed corner that he eventually halted in front of it. “I wasn’t ok,” he says now. “I was pulling like hell, I did not want to go to that jump.”

After more trouble unfolded into the summer, it was time to rethink the plans. At Sharon’s suggestion, Woods and Contendro backed off. They went back to the drawing board to reestablish fundamentals that had been shaken. They ran some Preliminary-level events – slowly. This revisiting of the basics helped Woods relieve himself of the guilt he felt at being “the hindrance” in the relationship. “It’s one of those things where I know the horse is fantastic and then I feel like I’m the problem,” he explains. “Maybe he didn’t need to go back like that, but it still made him better and it made me better.”

The USEF CCI4*-L National Championship was hosted at Tryon International Equestrian Center in North Carolina last November. Woods and Contendro rose to the occasion and made good on their promise to come back better in every sense of the word: they took home the title, just edging out Sharon with her own rising star, Claus 63, for the win. 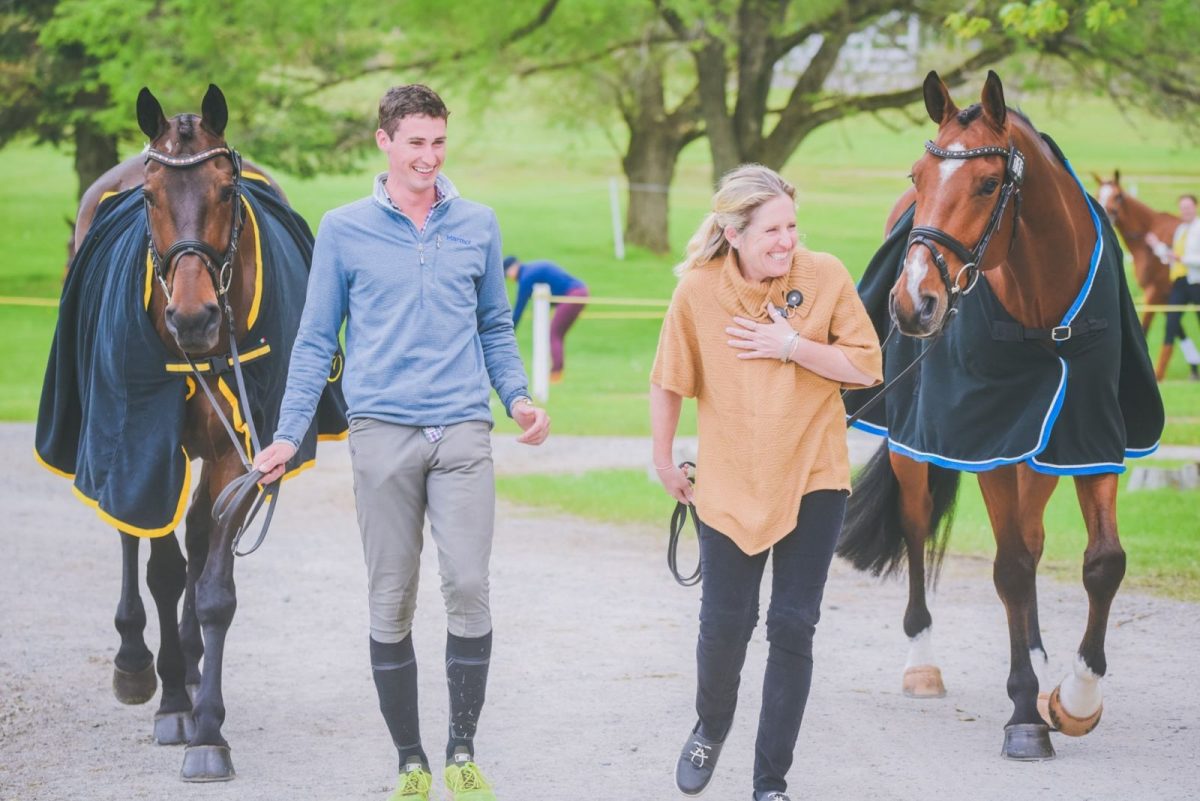 Which brings us to now, the week ahead of Woods’ official and long-awaited 5* debut. More importantly, it’s a homecoming – yes, he competed in the 4* here last year, but now comes realization of a goal he’s eyed since he first discovered “some horse thing” all those years ago.

“My whole family, the whole barn, and all my friends are going to be there,” he says. “I’m not sure if they were joking, but there was talk of t-shirts. I know they have at least three tailgating spots. So for me, that’s exciting because it’s one of those things that everyone says they want to do when they’re little and now I’ve somehow actually stuck with it long enough.”

Making it to that centerline and that start box in Kentucky is representative of a million small steps culminating in one moment. It requires diligence mixed with stubbornness, and a real desire to never give up.

“He hasn’t given up,” Sharon described last year at Tryon. “And that’s the thing. You put one foot in front of the other, you figure it out, and you’re willing to go through the agony. You keep on soldiering through, and you learn from it. He is closer to being an expert now, with his year, because that is how you learn — by it all going wrong.”