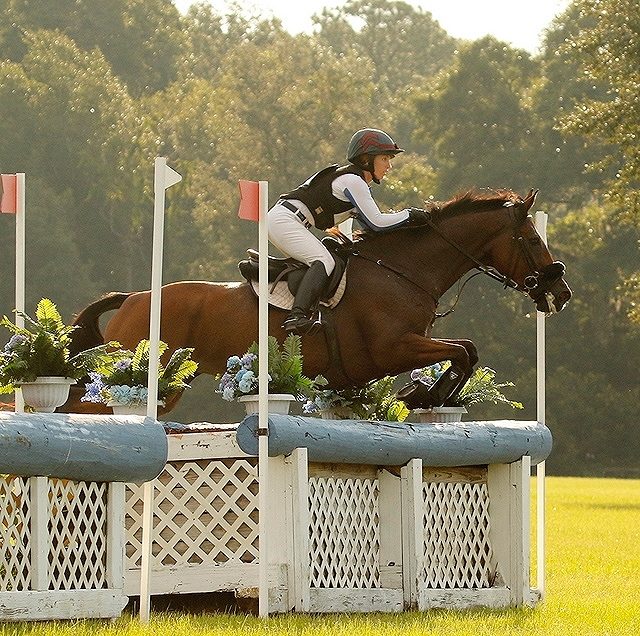 When Zoe Crawford first met K.E.C. Zara as a high-school junior, the idea of competing in eventing just seemed like a fun idea. What started as a search for a horse with which Zoe could try out the discipline has resulted in a partnership going on nearly a decade. Later this week their partnership will be culminating in a trip to the top level of the sport at the Land Rover Kentucky Three-Day Event.

Zoe’s affinity for horses seemed to be innate despite neither of her parents having a horsey background, yet horses would become a family affair. Her parents decided to take up riding too, after getting Zoe started with up-down lessons — after all, it looked like fun and they were driving to the barn anyway. Throughout Zoe’s childhood and grade school years, the family’s recreational together time consisted of snowy trail rides though the Blue Hills area outside of their native Boston, Massachusetts in the winter and family lessons at a barn near Zoe’s grandparents’ cabin in New Hampshire in the summer. Riding was more focused on having a solid foundation, enjoying the horses, and having fun — with the occasional local jumper show sprinkled in —  than it was focused hardcore training for any single discipline.

Though she was peripherally aware of eventing, it wasn’t until after upper-level eventer Jeanie Clarke became a more frequent instructor with her local Pony Club chapter that Zoe got a real taste of the discipline and it started to really pique her interest. Around that time too, Zoe’s first horse had tragically passed away from a freak bacterial infection only about a year after her purchase. With the idea in mind that she wanted to try out eventing and after spending a summer trying horses without any success of finding one she clicked with, they deferred their search to Cormac Kennedy, a US-based Irish horseman who routinely imported Irish horses for training and resale as Hunters and Jumpers, and with whom the Crawford family had boarded with and ridden with for years.

Zoe and her parents told Cormac that if he saw something that might work for her on his next trip to Ireland to bring it back. With not much instruction to go off of, just years of knowing Zoe and her capabilities as a rider and that she wanted a horse to possibly go eventing on, Cormac told them he had found a young mare who was incredibly athletic but hadn’t really done anything and he thought it was the right horse for Zoe. Without seeing photos or video, they told him to bring it back. 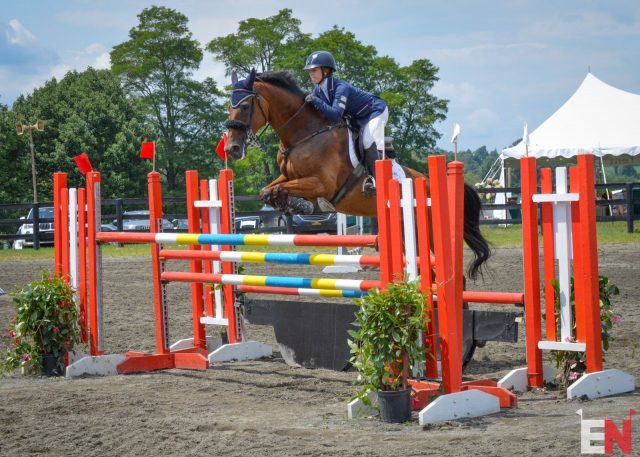 Gazing through a dimly lit quarantine facility an hour outside of her home in Boston, Massachusetts, Zoe inexplicably knew then and there as she laid eyes on the horse that the 5-year-old mare was the one for her, even though she couldn’t even fully see her under the weight of multiple blankets warding off the New England winter temperatures. “Zara” actually didn’t even have a name at that point, Cormac and his wife named her later on, but Zoe and Zara’s journey together began right then.

Around the time that college acceptance letters were coming out, Zoe knew she wanted to take a gap year and decided that she’d like to jump into the eventing scene. She arranged to take a working student position with Jeanie Clarke, who would be relocating to Florida in the fall, and deferred her college admission. It wasn’t until after graduating high school that Zoe and Zara competed in a recognized event, running two horse trials in New England before migrating and settling down south in November of that year, making a stop for another event in Virginia along the way. 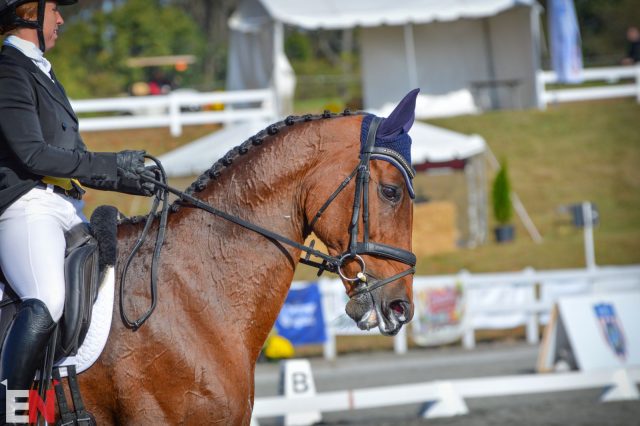 By the following spring, Zoe and Zara had made their debut at the Preliminary level. The next few years were spent bouncing back and forth from Florida with Jeanie in the summer and winters and Dickinson college in Pennsylvania during fall and spring semesters, working towards earning a college degree while also working her way up the levels of eventing. Along the way, the pair made a trip to Colorado to compete in the 2017 North American Young Rider Championships, earning a fourth place finish in the three-star. Later that year they were named to the Emerging Athlete Eventing 25 program for the first time, where Zoe was introduced to the program’s coach Leslie Law, with whom she has regularly trained with since.

“[Leslie is] always focused on solidifying the basics to improve the horses’ way of going,” Zoe said. “This style has been really helpful with Zara because she is so hot. She’s always going to try her heart out but also thinks she always knows best so she always needs to go back to the basics just because of her personality.”

And Zara has a big personality, though she shows it differently depending on whether she’s at home or at a show. At home, Zoe can ride her in a halter and lead rope and she’s the easiest, most polite horse around the barn. Things are a little different at competitions, however:

“At shows she is absolutely feral! I joke that she must have an abnormally large adrenal gland because she seems to have an unlimited supply of adrenaline!” said Zoe.

That high adrenaline is not so helpful in the first phase, making dressage the pair’s weak point despite attending countless dressage schooling shows to try and hone their skills. While Zoe had a good amount of jumping experience prior to acquiring Zara, the pair has had to learn the ropes of dressage together.

“We are always working to make the dressage better, but I also know it’s always going to be a struggle.” Zoe said. “The dressage has been incredibly frustrating, but what makes her so difficult on the flat also makes her an incredible cross-country horse.”

If you’ve ever watched Zara run cross country either in-person at an event or on a live stream, then you know what Zoe means. Zara is like a heat-seeking missile to the fences and was simply made to run and jump cross country, so it’s no surprise that cross country day is what Zoe is most looking forward to about Kentucky.

“Zara is out and out a cross-country horse and a long format one at that. She is so game that the short formats are more difficult because I can never truly let her gallop. We’ve done three four-star longs at this point that she stormed around, so I’m so excited to see how we both handle the five-star cross country!” 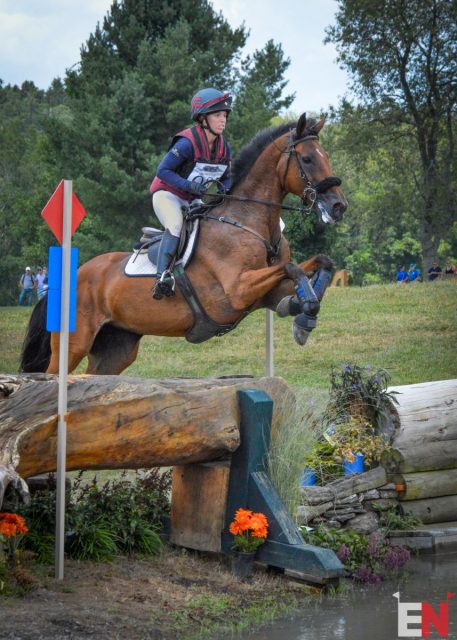 Zoe was the recipient of the USEA Foundation’s Essex Horse Trials Grant in 2018 which she used to gain experience in Area II for the 2019 season, training with Phillip Dutton out of his True Prospect Farm and picking up work at Ronald Zabala-Goetschel’s Pennsylvania operation as well. She was also named to the Eventing 25 for a second time in 2020 and, now 26 years old, has been named to the 2021 Development Training List. All these experiences have set Zoe up well both to set up her own business based out of the Ocala Jockey Club as of last fall, and to make her five-star debut with her mare of a lifetime.

Zoe is one of the several would-have-been five-star first-timers last year, having diligently qualified and entered the event before COVID-19 forced the cancelation of Kentucky, and many other events, last year. After the initial disappointment of having to wait another year for a chance at a five-star, Zoe says she ultimately feels more confident and prepared than she did this time last year.

“It was so disappointing because I had a fit and healthy horse that was ready to go and it’s also not a guarantee that the horse will be fit and healthy for the next year. Looking back on it now, I’m almost glad we didn’t go.” Zoe said. “We definitely improved a lot of the rideability in the past year and ran another four-star long.”

Much of last year’s downtime was put into improving the basics on her three competition horses, something that her coach Leslie Law emphasizes, but it was a hard mental game to play when there were no competitions on the calendar to work toward for a long stretch of time.

“Of course the goal is always to improve the horses’ way of going and rideability, but it is a lot easier to work towards when you know you have some sort of competition goal whether that be getting a young horse to its first schooling show or preparing one for an FEI event.”

Riding in the big Rolex Stadium at Kentucky will certainly be a new experience and Zoe wonders how Zara will react to it, but hypothesizes that not having spectators allowed at the event may be a blessing in disguise for the first phase at least. She’ll have some familiar faces there, however; her parents will be coming down for the big competition and her fellow Norfolk Hunt Pony Clubber, Tegan Henderson, who is now a professional groom will be grooming for her. There are many more friends near and far who have supported them over the years who will be cheering this long time partnership on from home as well.