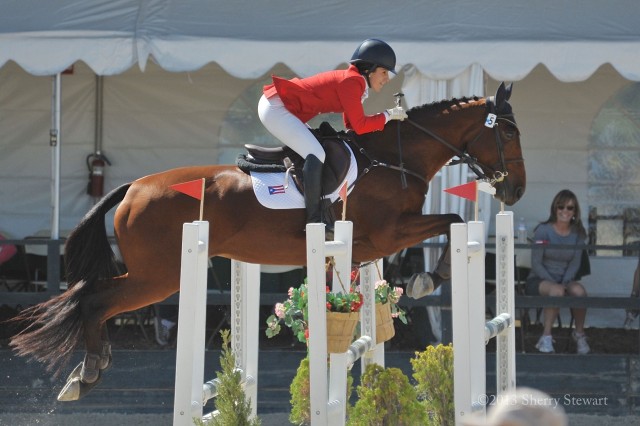 Lauren Billys has her eyes set on representing Puerto Rico in the Pan American Games and, subsequently, the Olympics in 2016, and has set many plans in motion to accomplish this goal. To that end, she announced yesterday via an Athletux press release that she had made the decision to sell her 13-year-old Irish Sport Horse mare, Ballingowan Ginger, to young rider Jordyn Horwitz.

Lauren imported purchased Ballingowan Ginger in 2007, the year after the mare was imported from Ireland. Together, the pair made their way up to the Intermediate and Advanced level, highlighted by a second place finish in the CIC3* at Twin Rivers in 2014, among other achievements.

“Ginger and I have grown up together, I competed my first Preliminary, Intermediate and Advanced competitions on her, did my first FEI event with her, and was chosen for the Puerto Rican Team as a result of our success,” said Billys in the press release. “The decision to sell her was one of the hardest choices I have ever had to make, however, I know that she can change another life the way she has mine, and I owe it to her to allow her to continue doing what she loves most at a level she is comfortable.”

With the sale of Ginger completed, Lauren will be on the lookout for a young horse with four-star potential while she continues to cultivate a lasting partnership with Castle Larchfield Purdy, whom she acquired last year.

At 17, Jordyn Horwitz plans to gain more experience at the upper levels aboard Ginger, having competed through the CCI* to date. “I know Jordyn will love Ginger as I have and cherish the opportunity to ride her, which means the world to me. I will be rooting them on every step of the way, and look forward to watching Jordyn and Ginger accomplish great things together,” Lauren said.

We wish Ginger, Jordan, and Lauren the best of luck in their respective new endeavors.