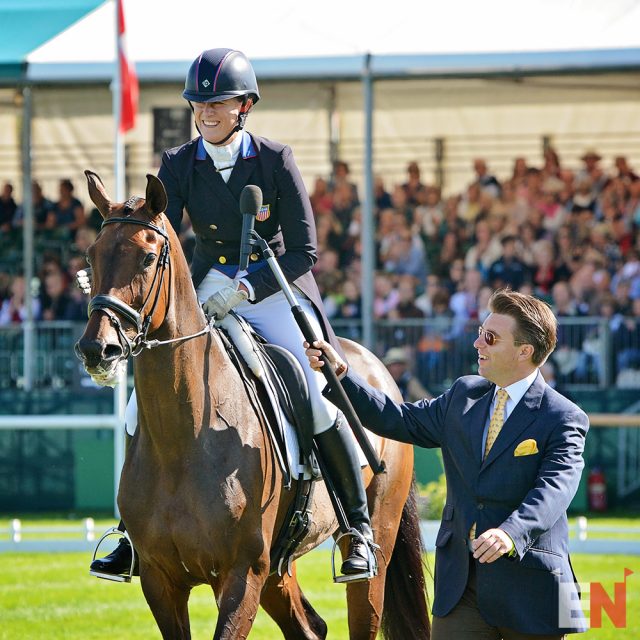 Lauren Kieffer and Veronica after their leading test. Photo by Jenni Autry.

We saw Lauren Kieffer and Veronica score in the 30s for the first time at Badminton this spring, and they bested that mark today to secure a new personal best of 37.0 and take the Burghley lead with just one group left to go on the second day of dressage.

“Her canter work was quite good, and her walk. We have struggled with those in the past,” Lauren said after her test. “She’s such a going mare that it’s hard to keep it fluid. This test really suits her with the lengthenings and the stretch circle. It actually helps her along.”

Veronica is certainly a seasoned campaigner now, marking her 10th overseas start here at Burghley, and absolutely a consummate professional when it comes to her job. The 15-year-old mare (Pacific X Kimbel, by Ferro) owned by Team Rebecca is “definitely a workhorse,” Lauren said. “She definitely knows what a competition is. She loves it. It’s probably where she’s the happiest.”

The same could be said of Lauren, who has attended Burghley before but makes her debut as a competitor this year. While she has tackled some of the biggest cross country courses in the world, Capt. Mark Phillips’ track is an entirely different animal.

“It’s big and bad and what you expect,” Lauren said. “Mark plays on the rider’s ability to act on instinct. You can’t go out with a dead-set plan and stick to it. You have to be able to react in the middle of combinations and situations. Strangely enough it walks uphill the whole way. A fit horse is a necessity.”

Lauren’s plan tomorrow will be to take all of the direct routes, which will be essential if she wants to challenge the optimum time. Interestingly, during Lauren’s summer based in England she has spent time jumping with Jonelle Price, who has made the time at Burghley before and is well known for her speedy cross country riding.

“Jonelle is obviously a very fast rider,” Lauren said. “We’ll have a good plan out there on how to be efficient without taking too much gas out of her and also getting over the jumps the first time.”

Michael Jung and La Biosthetique Sam FBW, who led overnight after the first day of dressage, now sit in second on 38.9, with Andrew Nicholson and Nereo in third on 39.5 as the final pair to go before the lunch break today. 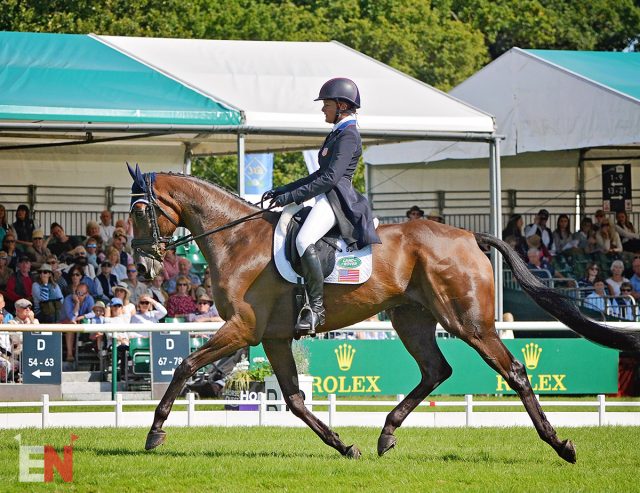 Looking to our other two American combinations that went this morning, Lynn Symansky and Donner scored a personal best of 45.5 to sit in sixth place. While they picked up an error early in the test when Lynn went into extended trot instead of shoulder-in, it was easily the best test The Flying Deer has ever done.

“I was so proud of him,” Lynn said after the test. “I was the one who made a bit of a mistake. I was actually out there enjoying the ride, which I don’t always do in the dressage ring, and spaced for a second.”

Donner, a 14-year-old Thoroughbred gelding (Gorky Park X Smart Jane, by Smarten) owned by the Donner Syndicate, is a spooky horse and can struggle with tension in the first phase, but he has steadily improved.

“The horse has been improving every single four-star he’s gone to. Badminton was his new best four-star score and this improved on that. He’s been really reliable over the past two years. I was hoping to be in the mid-40s mark. I could have improved that a bit, but I have no complaints going into tomorrow.”

Lynn and Donner jumped clear around Burghley in 2015, the first year the course ran in the new direction, so they have that as an advantage when they leave the startbox tomorrow. While a galloping track suits the former racehorse, the right-handed corners on the direct routes do not, and Lynn has adjusted her plan accordingly.

“I know my horse so well. This is our 8th four-star together. He can be a little spooky and he needs a second to settle into a course like this. I’ll likely go long at the second water to the left-handed corner, which I think is easier for the horses to read. I’ll maybe take one other alternate route to not risk the right-handed runout.” 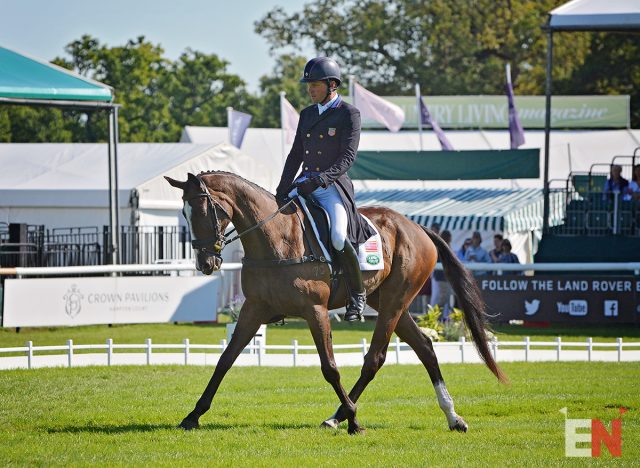 “The biggest thing is keeping him relaxed,” Boyd said after his test. “William Fox-Pitt rode him a bit earlier this year and did everything the opposite of what I would usually do. He really made some improvements with the horse, just in his warm-up and his general work. I learned a lot from him, and it really paid off.”

William rode Steady Eddie at the $100,000 Wellington Eventing Showcase in Florida in January, and he was ringside today to congratulate Boyd after his test, which just missed matching their best four-star score of 46.3 from Kentucky the spring.

Boyd is no stranger to Burghley, having finished seventh in 2011 when he made the optimum time aboard Neville Bardos, but this is his first time back competing at the event since then. “Fences 1 and 2 look alright, and after that I’m nervous as hell,” Boyd said. “It’s relentless.”

Luckily for Team USA, we have our A-team here at Burghley. “I reckon there will be three Yanks finishing in the top 15,” Boyd said. “It sounds ambitious, but we have some of our best riders and best horses here. I think it’s important that the Americans keep fronting up to the biggest and toughest competitions.”

One factor playing to America’s advantage has to be the addition of Ian Stark as a cross country advisor for the team. Joanie Morris, USEF Managing Director of Eventing, confirmed to EN that Ian’s role is temporary through the fall season and separate from the search for a new U.S. Eventing Team Performance Director.

The USA now has three riders in the top 10 and five in the top 20, and Boyd Martin is predicting that three American riders will finish in the top 15. Mackenna Shea and Landioso, who sat in third overnight, are now ninth on 46.1, with Hannah Sue Burnett and Under Suspection in 19th on 48.8. Andrea Baxter and Indy 500 are 39th on 56.9, with Woodge Fulton and Captain Jack in 50th on 68.9.

The last American to win Burghley was Stephen Bradley aboard Sassy Reason in 1993, a feat commemorated by a silver plaque on Winner’s Avenue. Bruce Davidson is the only other American to win at this venue, taking individual gold when Burghley hosted the 1974 World Championships.

Are we poised to see an American win Burghley for the third time in history and first time in more than two decades? We have a long way to go still, but the chinchillas are certainly smiling after a thrilling morning of dressage.

And there is still much more to come here at Burghley. Mark Todd and Leonidas II will kick off the final session of the day at 2:30 p.m. BST/9:30 a.m. EST. Caroline Powell and Onwards and Upwards and Tim Price and Ringwood Sky Boy are both combinations to watch, as they scored in the 30s last year at Burghley.

Lillian Heard and LCC Barnaby are our final American pair to go at 3:18 p.m. BST/10:18 a.m. EST. You can watch live on Burghley’s Facebook page, and you can also re-watch today’s action on the Facebook page. Click here for a full list of dressage ride times. Go Eventing.