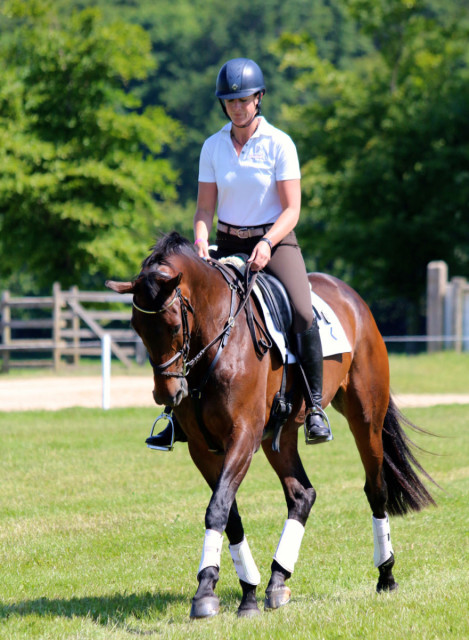 Lauren Kieffer brought Veronica out for a brief work on the flat this morning ahead of her 3:40pm GB time dressage test later today. Despite a little tension and once getting her tongue over the bit, she looked good — very confident. I asked US Team Coach David O’Connor what they’re aiming for in this session.

“You’re just trying to prepare the body as much as anything, just get the body loose and mentally have her with you. It’s not so much practicing movements or things like that, all that stuff is done, it’s just trying to get them mentally and physically in the right place so you can use them.”

What about the fact that they’ve travelled abroad and are in a completely different environment? “She’s a confident mare and she knows her stuff; the two of them are pretty good together.”

Does David need to manage Lauren differently now that they’re representing the US abroad? “Lauren has a really cool head as a person, as a competitor, so I don’t think that that’s going to have so much of an effect. The goal is for her to be very, very competitive here so if she feels like she can cut it loose on the day she’ll do that but nerves is not so much of a problem for Lauren, it’s not her thing!

“She rides a little better if she’s a little ticked off which she is here because Kentucky didn’t go as well as she wanted it to, and I think she is better when she’s like that, she’s a little sharper.” 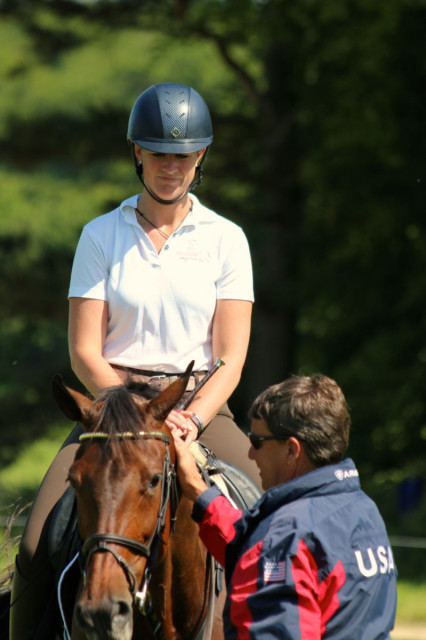 Bramham, like most events in England, runs all three phases on grass — how does that affect the warm-up, or the test? “I don’t think it will bother this horse so much. I think being on grass and especially being a little hard you might not get quite the movement that you’ve had were you on a surface because the horses are being a bit more careful so that might be the one thing for today, for the dressage, you might not get quite the floaty trot or canter, only because the ground is a little bit hard.”

Does being capped to go to the Pan Ams make a difference, is Lauren walking taller, holding her head a little higher, I wondered? David laughed and told me like only a true horseman would that she hadn’t actually been capped yet, that they had to get to Toronto yet, and reminded me that Lauren was actually picked to be on the team once before and an annoying accident at home put paid to those dreams!

He did demur however, that we’re watching a champion in the making, “It takes you to another level when you do that. Everybody knows who Lauren is, and she’s obviously going to be around for a long time. She’s got all the talent in the world and she’s manic enough in order to play at the top of the game so it really depends on horses and stuff like that.

“Everyone forgets that she’s only 27 years old so she’ll be around for a while, and the Pan Ams will hopefully give her a lot of confidence but you never know, we’ve got to get there first, you always say you never ride at a Pan Am Games or Olympics until you actually ride down the centre line.”

Will we ever see David do a Mark Todd and ride down the centre line himself again? “I miss the eleven minutes and ten seconds, I don’t miss the couple of days before and it’s unrealistic once you step away and don’t have the time to think you could step right back in. You miss the competitiveness, that manic side of the details but you just try and take it on to have other people have that same feeling and you get a lot of enjoyment out of that.” 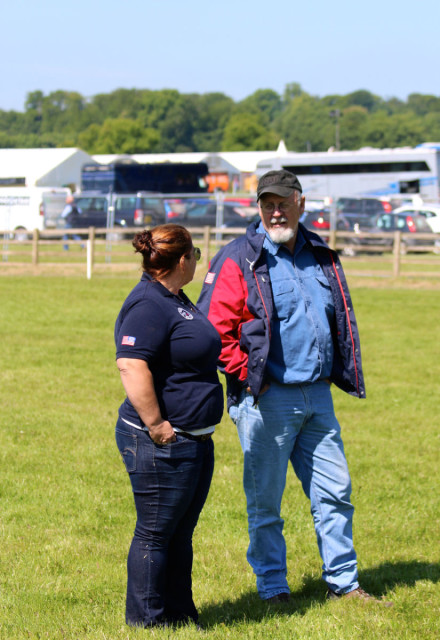 Wishing Lauren, Veronica and the entire Team the very best of luck this afternoon and this weekend. Go USA and Go Eventing at the Equi-Trek Bramham International Horse Trials!