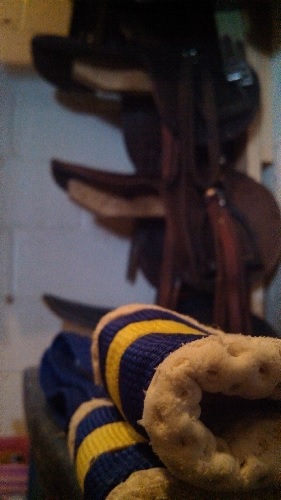 There is a degree of animosity present in every discipline that is directed at the gadgetry of all other disciplines.  Don’t shake your head, you know it’s true!  Eventer’s far and wide roll their eyes and covers their mouths when asked by some neophyte about the efficacy of standing martingales or the implements used to produce rollkur.  All the while, these same riders are probably heading out to the XC course bitted up to the nines with the likes of Mikmar combination bits that look better suited for a Saw movie than a horse’s sensitive mouth.  The racing industry, with its reputation for appalling PETA at every turn, seems to catch the brunt of a lot of disdain as well for using cruel, harmful, and abusive methods to produce speed from anything on four legs (and two in some cases…Google Ostrich and Jockey races for a good laugh!).  In most racing barns across the country and world, however, quite the opposite is the case.  Allow me to provide you, dearest EN readers, with a virtual tour of a racing barn tack room.

The shedrow is quiet in the Monday midafternoon heat as you walk into a 12′ x 12′ room at the end of the barn probably denoted by a number or letter (there are usually four at each end of each barn on a backside for a total of eight).  A groom and his flavor of the week are holed up in the room to the right, housed for free by their employing trainer and paying no mind to the thin walls separating the adjoining rooms. To the left, the feed room is wall-to-wall shelves of supplements, electrolytes, buckets, garbage cans full of feed, and bags of feed yet to be opened.  Through the door, you gaze around at the saddles, pads, bridles, yokes, rings, nosebands, blinkers, laundry, and tack trunks that number enough to outfit the 75th Calvary unit during the Civil War.  On the left, a long table is butted up against the wall and ends at the cage surrounding the hot water heater.  A coffee machine and microwave are veritable giants’ among an array of filters, used cups, stir sticks, and sugar packets.  Apparently, a Starbucks bomb was detonated there earlier in the day.  A lone donut with a bite out of it occupies an otherwise empty Krispy Kreme box, a sure sign that a horse in the shedrow won a race over the weekend.  Under the table, a half-consumed 18 pk of Natural Light looks as though a wolverine opened the cardboard box.  Chances are, a salary rider from this stable had a Polytrack sandwich for lunch and is paying for it.  If you fall off on the track (no excuses, ifs, ands, or buts), it is industry standard to supply the barn with beer pronto or you will hear about your faceplant/lawndart/dirtbath forevvvvvvvver (but quickly produce the alcoholic goods and it will never be mentioned again).  Dragging your gaze from the donut or beer calling your name, you begin to inspect the tack piece by piece. 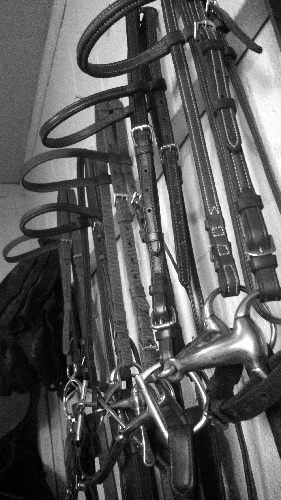 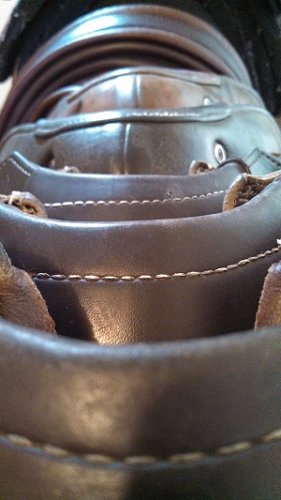 All of the exercise saddles are tiny, well-loved, and pretty much identical though some are emblazoned with the initials and colors of the trainer on the flaps and others are just plain black or brown leather.  There is one saddle half the size of all of the rest (a “work” saddle, which is usually a racing saddle used only for breezing) and all of the saddles are topped with stacks of 2” thick foam pads, ½” thick wool pads, and piles of basic English girths.  Piled in an orderly regiment on top of the tack trunk next to the corner full of saddles and pads, the saddle towels and girth covers form color-coordinated ranks of fleece and cotton and are flanked by a stack of polyester and plastic “burn pads” that are used to prevent rubs from the girth and the rider’s feet.  Saddles, pads, girths….all of these are fairly standard issue in any barn.  Your eyes then shift upwards to brigade of headgear. 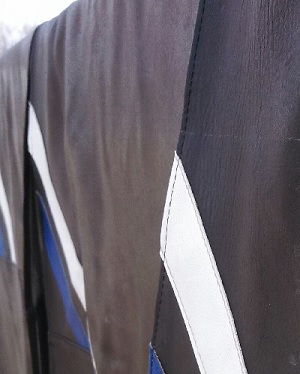 A single nail holds a mass of blinkers with cups ranging from tiny, ¼” ‘cheaters’ used to acclimate horses to the idea of a hood and limited vision, to full cup and even extended cup blinkers.  One set of blinkers even has a “bubble”  over one eye (often used to protect horses that have lost an eye).  Blinkers, while seemingly a bit cruel to some, are most often used simply to encourage a horse to focus and are sometimes used to discourage horses from ‘lugging’ out towards the outside ride or in towards the infield (after all, horses aren’t typically all that keen on heading in a direction that they can’t see).  The bridles are all primarily simple leather headstalls.  There are a couple of nylon headstalls and a couple of bridles with fancy browbands in stable colors.  One bridle (the racing bridle used on big race days) on the end is figure-eighted and has a noseband and browband padded in stable colors.  The bits are all primarily narrow D bits, with a fat eggbutt or two thrown in, one full cheek, one or two ring bits, and a three-ring ‘elevator’ rounding out the mix.  Another single nail holds long loops of leather with a buckle on one side and a long strip of leather with a loop on the end attached.  Known as ‘martingales’ in most disciplines, these are what racing folk call a ‘yoke.’  On the next nail, leather triangles hang with two brass or metal rings on the top and a snap on the bottom.  These function as basic ‘running’ attachments (to form a complete running martingale) but are known as ‘rings’ around the backside or ‘training forks’ to the old schoolers.  Last but not least, nosebands hang on the final two nails.  One nail holds plain leather cavessons while the other holds an assortment of drop, figure-eight, and rubber figure-eight nosebands with an overcheck (that thing Bad Boy Billy used to run in for Ralph Hill) thrown in for some flavor. 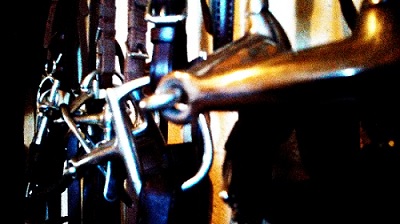 As you scan the remaining assortment of gear, nothing seems all that unconventional really.  A basket full of polo wraps here, some rolls of vet wrap, some ace bandages, and some bell boots there.  While it would surprise most English riders, the average racing tack room is really not all that different from their own tack rooms at homes.  Any questions?  Feel free to email them to me at [email protected] and get me those conformation pictures for next week’s return of the OTTB conformation clinic!  Go Eventing and go gallop a former racehorse!