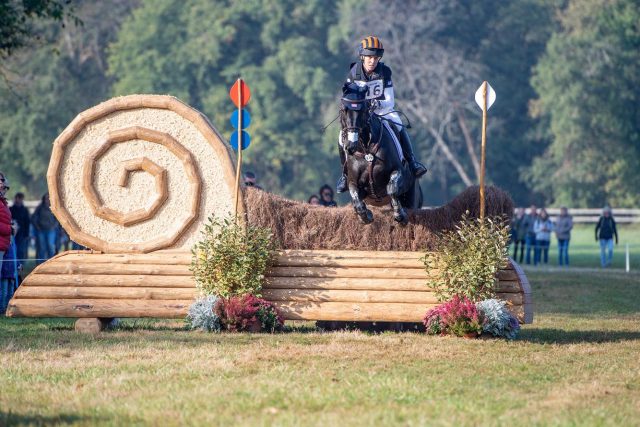 One for the big tracks: Liz Halliday-Sharp and Cooley Moonshine lead going into the final phase at the six-year-old World Championships. Photo by EquusPix.

US representative Liz Halliday-Sharp remains atop the six-year-old leaderboard at Le Lion with Cooley Moonshine after a jam-packed day of cross country action. They added nothing to their impressive dressage score of 22.4, coming in 13 seconds below the optimum time of 8:56 to edge out the encroaching competition.

“He’s an unbelievable horse — he’s so talented and he finds this all so easy, which is kind of scary,” laughed Liz. “He came out today like a fire-breathing dragon; he was very strong, actually, and he is a strong horse, but he was definitely pulling my arms out, wanting to get on with the job. I had a couple fences where maybe I’d have liked to have been a little bit more attractive, but he wants to do it so much and he’s so brave. He was pulling me through the finish, so for his first long format, that’s exciting for the future — I maybe just need a few more brakes so we can agree on things a bit more!” 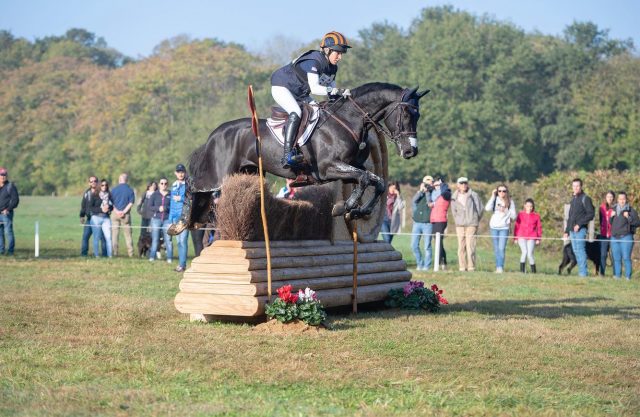 The child prodigy in action: Liz Halliday-Sharp and Cooley Moonshine. Photo by EquusPix.

In a top ten that remained virtually unchanged British riders took three of the top five spots, with Millie Dumas and Universal Cooley maintaining their hold on second place.

“I’m delighted with her today; she gave me a fantastic ride,” said a delighted Millie. “She was a little bit green and spooky to start with, but by the time I got halfway round, she was really super, really brave, and finished full of running. To start with she was a bit wobbly, looking at the crowds instead of the fences, so I had to give her a little reminder — after that she was great. She’ll have learned a lot, for sure.” 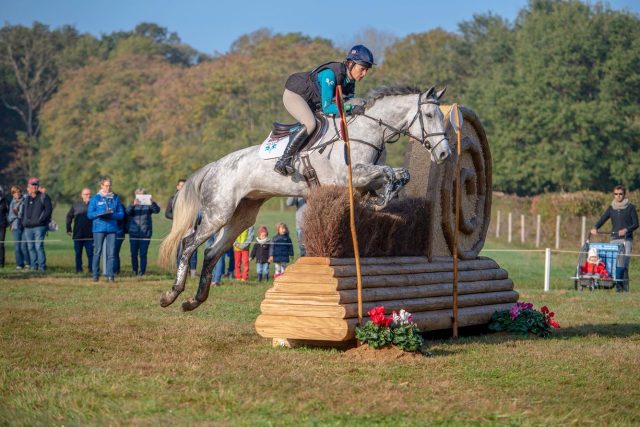 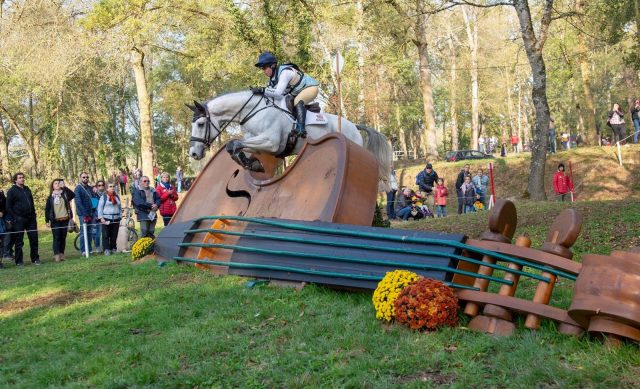 “He gave me a fantastic ride — we had great fun and the ground was brilliant, and they’re beautiful jumps to jump,” said Kitty. “He was a little bit surprised by all the crowds to start with, so he was sort of cantering along with his ears really pricked and his eyes really wide. He was a bit shocked, but then he settled and got used to everyone and gave me a really nice, grown-up ride and finished really well. I was delighted with the way he jumped off the house with the big drop [near the end of the course], because you never quite know how a baby will cope with that, but he jumped off really bravely. Fingers crossed he can be as good tomorrow!” 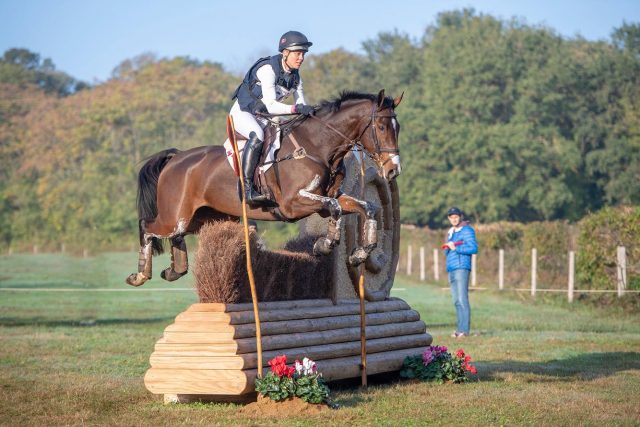 Rebecca Howard and Trebor, owned by Canadian eventer Kelly McCarthy-Maine, make their move towards the top ten. Photo by EquusPix.

A fast clear moved Rebecca Howard and Trebor one place up to 12th overnight, while second ride Cooley Convinced moved up two places after her double clear. Mexico’s very first representative at Le Lion, Pedro Gutierrez‘s California Mail looked capable and confident throughout her round, adding nothing to her dressage score and moving up to 32nd place from 39th. 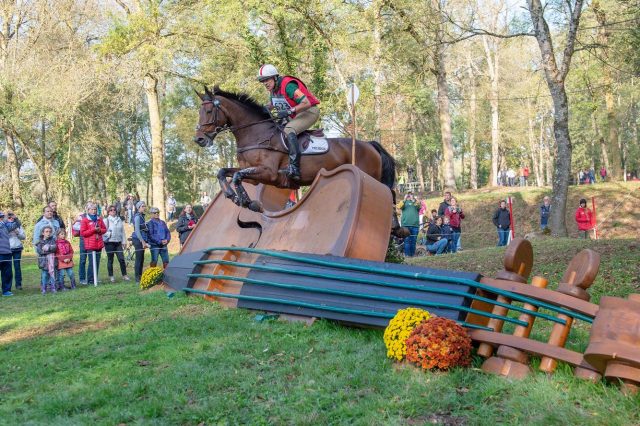 Pedro Gutierrez and California Mail serve up a double-clear and a little bit of Le Lion history, too. Photo by EquusPix.

The second US representatives, Tiana Coudray and Happenstance, were one of two combinations who failed to complete the course — they took a tumble at fence 12 and walked home. 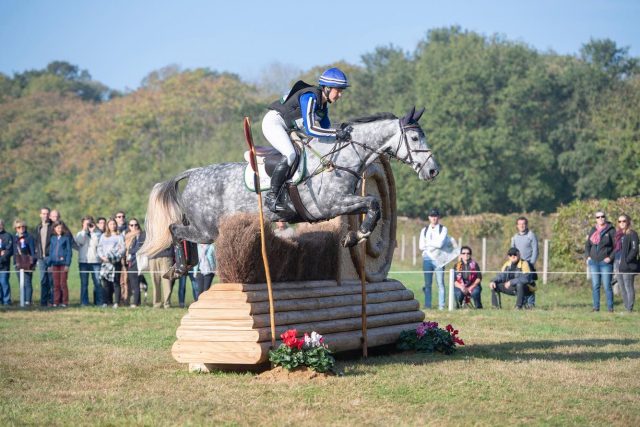 39 out of 41 starters completed the six-year-old CCI1* course, with five of the 39 finishers picking up cross country jumping penalties. Twenty-seven pairs produced double-clears.

The top ten in the six-year-old World Championships after the cross country phase.

Germany’s Ingrid Klimke moved up a place into the lead in the seven-year-old class after delivering a confident clear round with the Brandenburg mare Asha P, coming home ten seconds under the optimum time of 9:14.

“I’m very happy, because Asha did such a wonderful job,” said Ingrid after her round. “She was fast, she was bold — the one hesitation was jumping down the house. She was a little bit frightened at first, but then she did it, and we took the straight line so she showed all her quality.” 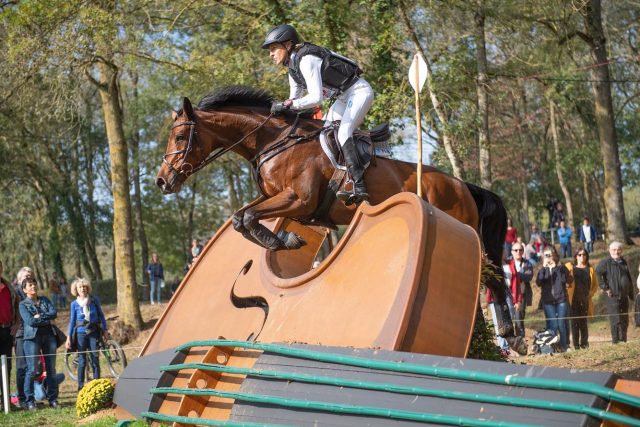 Ingrid Klimke’s Asha P steps into the lead after a bold round. Photo by EquusPix.

Ingrid, who considers the exciting young mare one of her future superstars, was delighted to further her education at the French venue: “It was pure fun and she learned so much, because the course is fantastic. You have so many different combinations where you learn so much about them and they can gain a lot of mileage.

“She wasn’t taking any interest of the crowd, but it was nice that you sometimes heard someone calling ‘Ingrid!’ and they were clapping, so you thought, ‘here we are! Nearly at a big championship!’ so it should encourage her to become a star one day. I think she’s my future top horse.” 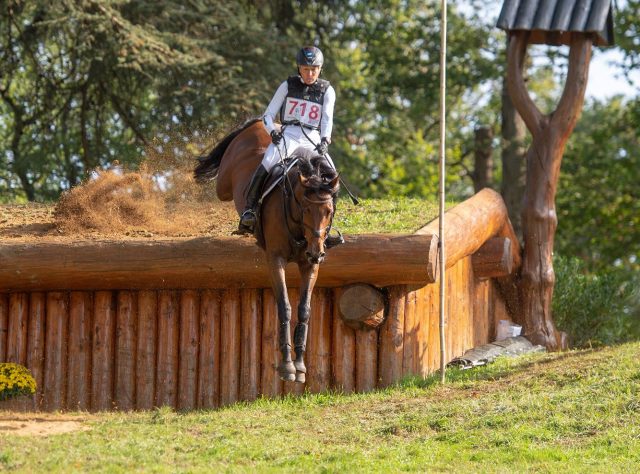 Of course, a clear round within the time on its own was never going to be enough to allow Ingrid and Asha to lead going into the final phase — overnight leaders Michael Jung and Choclat would have to make a mistake in order for that to happen. To everyone’s surprise, they did just that. The maestro of modern eventing and his talented youngster began the course brilliantly, with the gelding easily finding his optimal cruising speed and making economical use of his naturally sweeping stride. But then, at fence eight — an innocuous brush fence named the Burghley Fence — the horse appeared to second-guess his stride and he never quite got out of his own way. He caught a front leg on the fence and the pair were pitched over the top. Both got up immediately and walked away.

They weren’t the only high-profile non-completion: Le Lion resident Tom Carlile and the Selle Français mare Birmane were also victims of the Big E, further blotting Tom’s impressive record of FODs at this venue. Theirs was a rider, rather than horse, fall, and it came at fence 21, just two fences from home. Again, this happened at one of the less obviously challenging fences on course – having jumped the enormous drop and angled hedges at 19 and 20, the corner at 21 must seem rather like a speedbump on the way home. But this is eventing, and predictable it ain’t, so when Birmane twisted in the air and knocked the flag with her knee, Thomas was sent tumbling. Like Michael, he was up immediately and looked no worse for wear, while Birmane made a beeline for her gathered fans and rather charmingly evaded capture for a while. The seemingly straightforward corner went on to be responsible for three falls throughout the day. 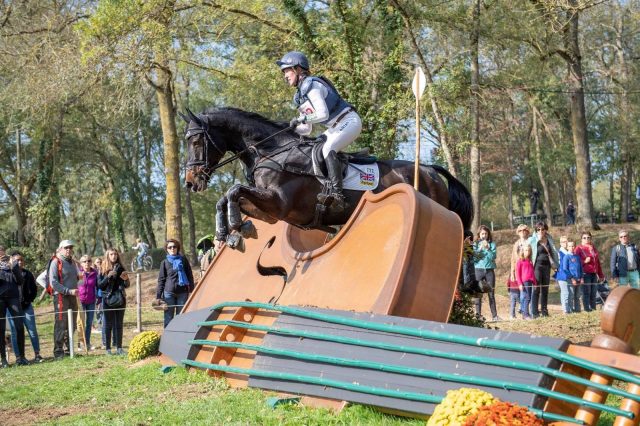 Nicola Wilson and JL Dublin moved up into second place overnight, adding nothing to their dressage score and coming in twenty seconds under the optimum time.

“I couldn’t have been prouder of him,” enthused Nicola. “From the first fence to the last fence he just gave me the most superb ride, and I think I was just there to make sure we got the numbers in the right order, to be honest! I was amazed, because this is the biggest occasion that he’s ever seen, and he just stayed focused the whole time. He was just an absolute pleasure to ride — and what a beautiful, beautiful course to ride around, with the crowd cheering you on the whole time. The support out there, even for foreign riders, was much appreciated.” 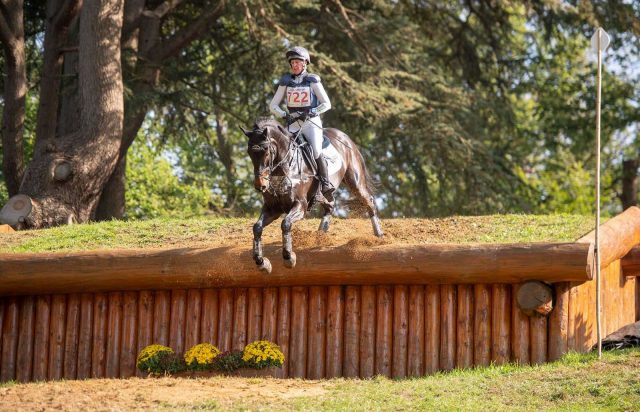 The British contingent made an impressive impact on the top of the leaderboard: Tom Jackson, who heads to Pau next week with two horses, piloted Capels Hollow Drift to a double-clear and overnight third, while Sarah Bullimore and Corouet, a son of her four-star mare Lily Corinne and graduate of the six-year-old class here last year, moved into fourth. Behind them, French eventing’s answer to Noah Centineo, Astier Nicolas, sits in fifth with Babylon de Gamma. This is probably still enough to make the French cry. We appreciate that. 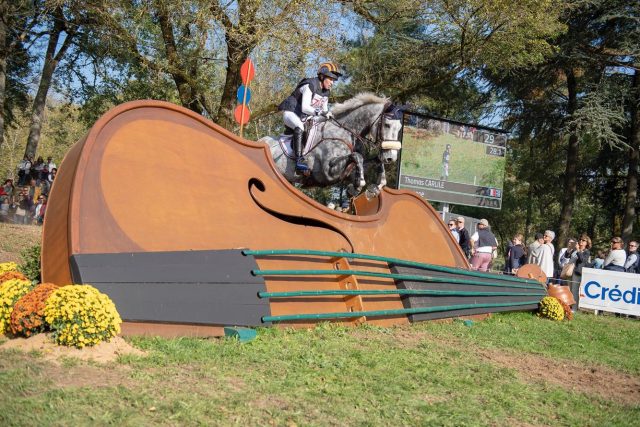 Liz Halliday-Sharp puts the pedal to the metal on her second ride of the day to sit just outside the top ten. Photo by EquusPix.

Liz Halliday-Sharp and Cooley Quicksilver climbed twelve places to sit twelfth overnight after adding nothing to their dressage score, while Doug Payne and Quantum Leap, too, delivered a sterling double-clear to climb from 59th to 31st going into the final phase. 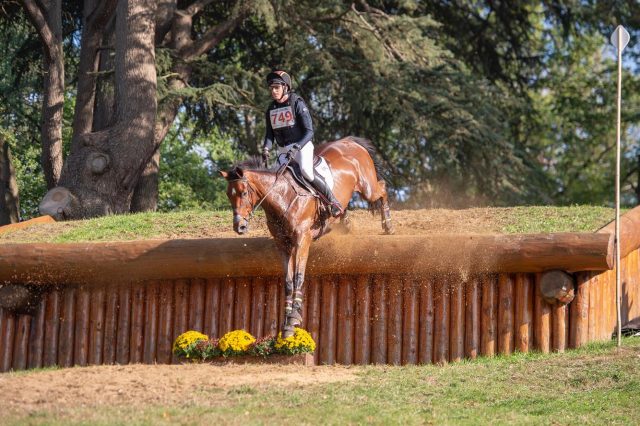 Doug Payne and Quantum Leap make an enormous jump, both down this colossal drop and up the leaderboard. Photo by EquusPix.

Ten of the 69 starters failed to complete, while 18 of the 59 finishers picked up cross country jumping penalties. The most influential part of the course was fence 19AB and 20, the colossal drop to two angled hedges, where we saw twelve faulters, including four 50s for missed flags. Ireland’s Michael Ryan picked up 50s on both of his horses, collecting them at 19B, the first hedge, on Briarhill Marco and 20, the second, on Barnahown Corn Hill.

Laura Collett‘s British Young Horse Reserve Champion Calmaro was another faulter on course, picking up a green runout and 20 penalties at the narrow final element of 10ABC, while Izzy Taylor and 2017 six-year-old World Champion Monkeying Around ran into problems at the end of the course. The horse appeared to gain in strength after jumping through the drop and hedges, flipping his head on the way to the corner at 21, giving him no opportunity to see the fence and resulting in a 20 penalty blot on their record.

“I was a bit disappointed to have 20 penalties, but he’s inexperienced and with everything — the slight undulations in the ground, and the crowds — his brain couldn’t quite keep up with his legs,” said Laura of her ride on Calmaro. “It wasn’t a naughty 20, it was just a green, baby mistake, but he’s a very exciting horse for the future. It’s the first cross country penalty he’s had; obviously now’s not really the best time to have it, but it’s all a learning curve at this age and we have to keep looking ahead to the future.”

Of her problem on course with the obviously talented Monkeying Around, Izzy said: “Of course it’s hugely disappointing — he won here as a six-year-old and I came back hoping to either win again or come very close. But they’re all still young horses here, and he very much remembered the excitement and the atmosphere of the place from last year, and it made him a bit nervous. He was looking about at all the crowds and he just got distracted — now we’ve got to go home and do some homework. He’s still a very good horse and he’ll come out of it a good horse.”

The final horse inspection will take place tomorrow morning at 8.30am local time, with the six-year-olds trotting up first. We’ll be bringing you all the news and some beautiful photos from our friends at EquusPix — stay tuned, and in the meantime, GO LIZ AND BILLY and Go Eventing!

The top ten going into the final phase in the seven-year-old World Championship.