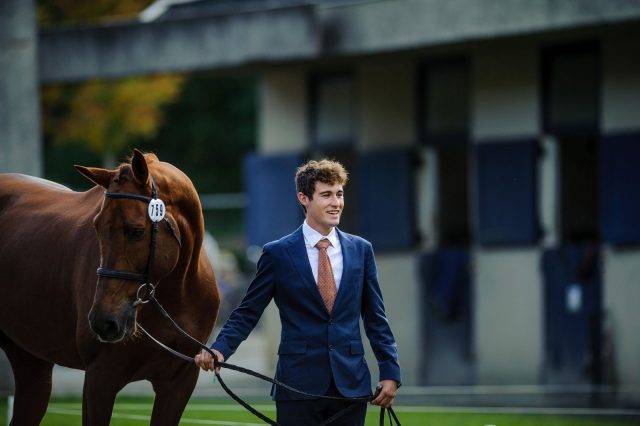 And just like that, the European season is nearly over. The FEI World Breeding Championships for Young Horses — better known as the Six- and Seven-Year-Old World Championships, set in the sweet little town of Le Lion d’Angers in France, is so emblematic of the closing of another chapter: its mid-October dates offer up the north of Europe’s last vestiges of sunlight (if you’re very lucky) and you can practically see the leaves turning as each phase unfolds. We all know that before too long, we’ll need to say our goodbyes until next season, and this year, having finally regained some sense of life on the other side of a pandemic, it’ll be particularly bittersweet to walk away from it all for the long winter months. 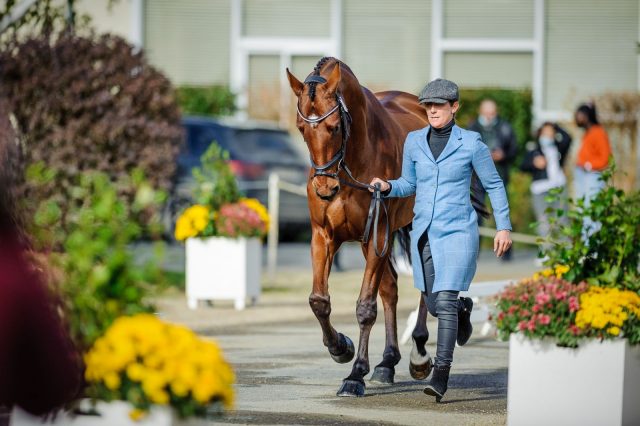 Caroline Powell and CBI Aldo tackle the Six-Year-Old World Championship — after a bit of excitement at the start. Photo by Tilly Berendt.

But who has time to worry about what’s yet to come, when there’s a world championship to focus on — two, in fact? Le Lion got underway today with its first horse inspections at the stables, and already, we’ve seen plenty of drama. Four horses were sent to the holding box in the six-year-old class, which will run at CCI2*-L and which was presided over by the ground jury of Nikki Herbert (GBR), Xavier Le Sauce (FRA), and Nice Attolico Guglielmi (ITA). Three of those held — Ireland’s Patrick Whelan and Altitu, New Zealand’s Caroline Powell and CBI Aldo, and the US’s Caroline Martin and King’s Especiale — would go on to be accepted upon representation, but Spain’s Alvaro Blanco-Traba Centener opted to withdraw Kiekeboe W from the holding box, bringing the Six-Year-Old World Championship down to 45 starters representing 21 nations. 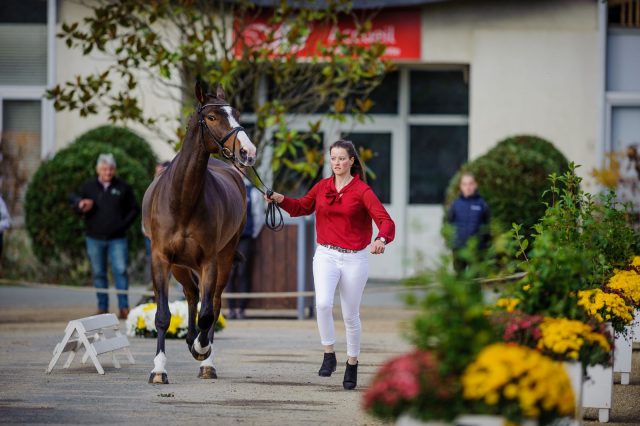 The Seven-Year-Old CCI3*-L was no less exciting, even under the auspices of a different ground jury. Led by president James Rooney (IRE) and helmed by Katarzyna Konarska (POL) and Emmanuelle Olier (FRA), the second ground jury of the day witnessed chaos and interpreted it as inspiration when watching the first session. Three horses were sent to the holding box — Hebertina, the mount of Russia’s Olesya Kosareva, sole Hungarian representative Crystal Barney, presented by Noémi Viola Doerfer, and Black Pearl Z, piloted by France’s Julie Bordenave — while two further competitors were asked to trot their horses again immediately after initially presenting, though neither Sanne de Jong of the Netherlands and her frisky Le Lion sophomore Jarelly MBF, nor Ireland’s Joanne Corish and Lates Caralier were ultimately sent to the hold box, and the three held horses were accepted into the competition, too. But like the six-year-old class before it, this field is down by one, too: Australia’s Kevin McNab opted not to present one of his entrants, Glenorchy, who contested the Six-Year-Old World Championship last year with Isabel English. Now, the field is 58 strong, and sees 17 nations represented. 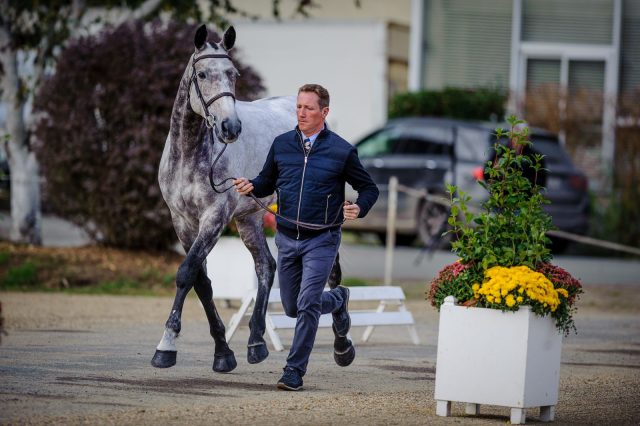 Oliver Townend looks to go one better with the exceptional Cooley Rosalent. Photo by Tilly Berendt.

There are plenty of exciting youngsters to support through the week, and we’ll be bringing you plenty of their stories as the competition unfolds — but if you’re looking for early tips on potential winners, it’s hard to look much further than Oliver Townend‘s exceptional seven-year-old Cooley Rosalent, who finished in second place in the Six-Year-Old World Championship last year and has continued to go from strength to strength in the season since. In fact, all three of Great Britain’s Olympic gold medallists come forward with exceptional entries: Tom McEwen led going into the final phase with MGH Brown Jack last year, who returns a year older and wiser, while Laura Collett‘s Outback got a super education in dealing with crowds when he took part in Aachen’s fast-paced Ride and Drive class last month. We also see a very, very strong return entry from Ireland, as Cathal Daniels and LEB Empress, fifth in last year’s CCI2*-L, come back for round two. Germany’s Felix Etzel and Promising Pete TSF return after a seventh-place finish last year, and Australia’s Kevin McNab and Cute Girl look set to make some positive moves — they were in a very competitive position last year, when their week was unfortunately cut short by a technical elimination for missing a fence. And, of course, we can never disregard the king of Le Lion, France’s Tom Carlile: his Etoile de Beliard didn’t compete here last year, but does bring a seriously strong record to the table, with three wins out of six FEI runs and nothing below tenth place on her record. 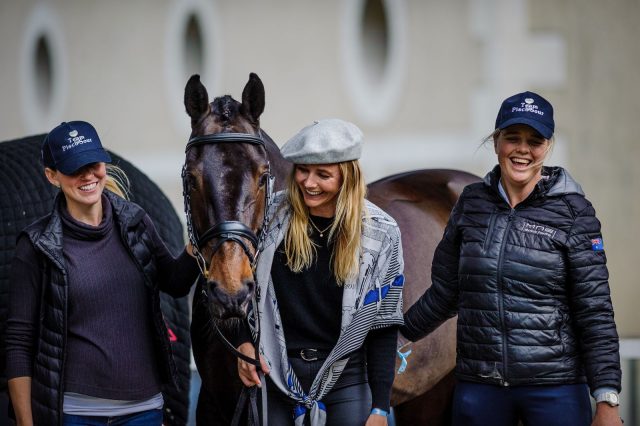 Avery Klunick goes full French with a beret for the trot-up — and a great girl squad in Mackenna Shea and Isabel English. Photo by Tilly Berendt.

Also very worth keeping an eye on are our three US competitors: fresh off the back of competing 12 (!) horses across all the classes at the Maryland 5 Star, a remarkably fresh-faced Caroline Martin brings six-year-old King’s Especiale, winner of the 2020 USEA Young Event Horse Championship for five-year-olds, to tackle his biggest challenge yet, while Avery Klunick and Pisco Sour join Cole Horn and MBF Cooley Permission To Land in the seven-year-old class. 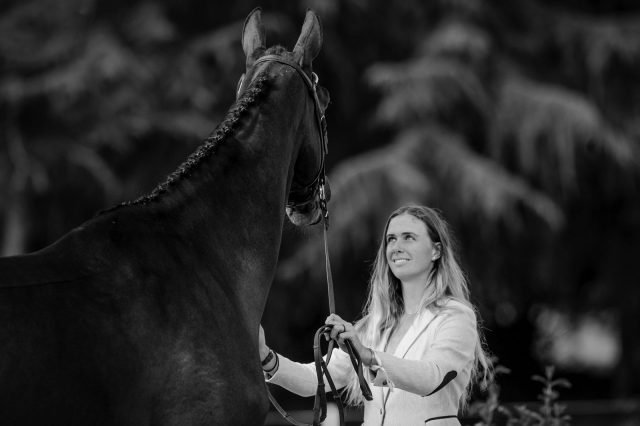 As always, we’ll be bringing you wall-to-wall coverage as we dive headlong into finding the next generation of superstars — and the cheapest red wine that’s still safe to drink. Bonne chance to all, but mostly to ourselves.