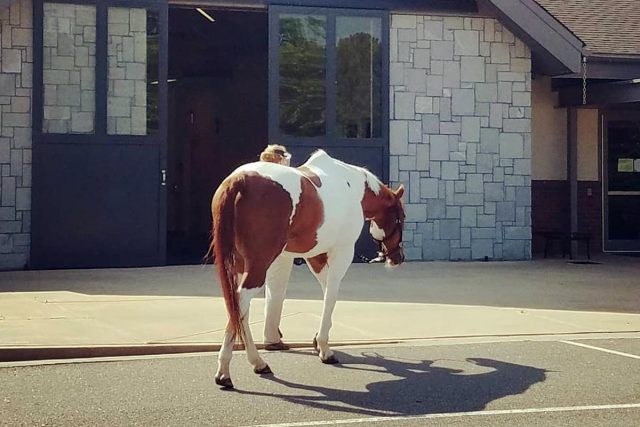 We last heard from Ainsley and JJ pre-pandemic. Since then, life has been a roller coaster, and not just for the obvious reasons. JJ came up lame and, following many vet visits, there’s finally a diagnosis.

Well, JJ’s mystery lameness is no longer a mystery – we have a diagnosis! It’s not the best news, but it definitely isn’t terrible, and it certainly could be a lot worse, so I’m grateful that it is what it is and that I’m able to finally get him the help he needs. 🙂

We got an appointment for an MRI with Dr. Peroni at the University of Georgia’s Veterinary Hospital. While I waited for the day to arrive, I took a look back on where we started and made my peace with whatever the prognosis would be.

JJ has given me SO much over the years – teaching me about eventing, inspiring my Ride Heels Down business, giving me the opportunity to ride with greats like Buck Davidson and Lucinda Green, competing (and finishing 7th!) at the USEA American Eventing Championships at the Kentucky Horse Park, having an epic sunflower photo shoot, spending a month living the dream in Ocala… we’ve made so many amazing memories together and I simply can’t ask for anything more. So, whatever the diagnosis wound up being, I was content with what we had already accomplished.

While we might not have gotten to actually finish a Training 3-phase (because weather, because priorities, and because shoes) we did complete four Training CT events and schooled everything on cross country from coffins to combinations, ditches to drops into water, and even some Preliminary questions. I feel like we got there, we just didn’t have the opportunity to show it off publicly. So, yeah, I’d say it counts.

Anyway, in the week leading up to the MRI, I cleaned out my tack box. I knew we would either get good news and I would have all nice, clean stuff to start rehab with, or we would get bad news and I would have nice, clean stuff to sell or put in storage. Same with my tack – it all got cleaned and conditioned in preparation, and it was pretty cathartic…

JJ got a bath the day before we shipped out to UGA, because I wanted him nice and clean for the doctor. I also knew that, although putting a horse under general anesthesia is pretty safe, there’s always a small risk… so, I groomed and bathed him knowing it very well might be the last time. (Thankfully, it wasn’t. Don’t worry, he’s fine!)

So, “MRI Day” finally arrived and we left Beaumont Farm on Monday around 8am. It was an easy haul over to Athens, less than two hours, and we arrived ahead of schedule.

A nice lady came out to get JJ, since I was not going to be allowed in at all due to COVID-19. (Ugh, so stressful not being able to be with him throughout all this!) Her first words were “wow, he’s cute!” when she saw him, though, which made me smile. 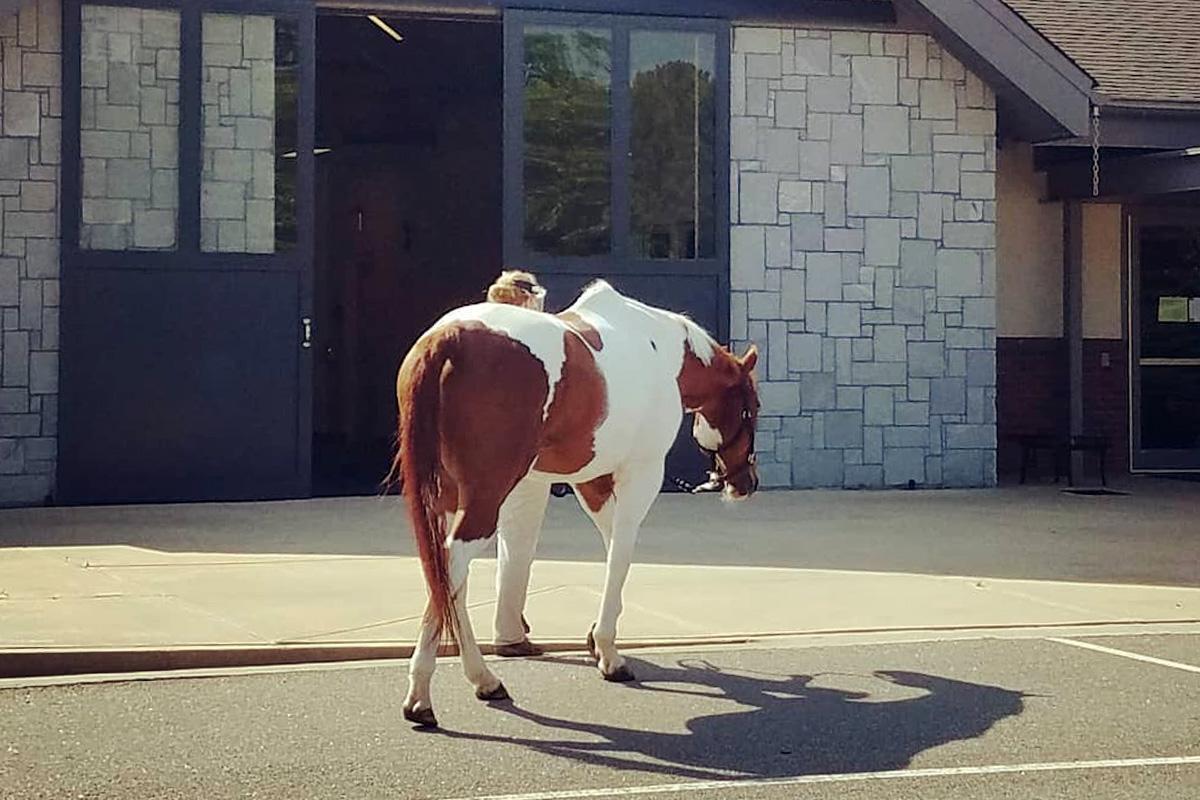 JJ heading into the UGA veterinary hospital like a good little soldier. Photo by Ainsley Jacobs/Ride Heels Down.

She took him off to get settled and then came back to collect his hay and feed. I gave her a bit of info about JJ and his likes and dislikes, and joked about how they should talk to him and tell him what they want him to do because ‘he speaks English and understands a weirdly unusual amount of stuff’ at which point her jaw dropped and she got a shocked look on her face.

Turns out, she had tried to get him to go into his stall here and he wouldn’t… and then she said to him “It’s okay bud, go on in” AND HE IMMEDIATELY DID, like he was patiently waiting for her permission. I love my polite, smart little horse SO much. 🙂

Anyway, they called me not long after to get a bit more history on him and the new lady on the phone also commented on how cute he is. When we were discussing his feed, I said he could have as many cookies as he wanted. She laughed and said they had already actually given him a ton. Ah, my son’s a charmer!

Dr. Peroni performed the lameness evaluation workup that afternoon and was great about texting me videos and updates so I could stay informed. He called after to recap his findings, which included blocking the lameness to isolate where they suspected the injury was, and we discussed steps to proceed with the MRI the next day. He commented on how well behaved JJ was and how quickly he had settled, like he had “been there forever.”

JJ’s MRI was scheduled for Tuesday around 11:30am and I was told it would take about two hours. I anxiously sat in my hotel (I wanted to be nearby, just in case, so I booked a room for the duration of JJ’s stay instead of going home) and awaited the “all clear” regarding his coming out of anesthesia… when it was almost 5pm and I still hadn’t heard anything, I panicked and texted Dr. Peroni.

Thankfully, JJ had come out of anesthesia “perfectly” but they had been busy with surgery all day. What a relief! Dr. Peroni later mentioned that JJ had “started eating very soon” after waking up and I was like, yep, that’s my horse! Haha. (Anyone who knows JJ knows that he is an absolute COW when it comes to food and it’s literally his favorite thing in the world. I don’t think I’ve ever met a horse who loves food more than he does.)

So, now that you’ve read through all this I bet you’re wondering – what was the diagnosis?? I won’t keep you in suspense any longer, here’s all the info!

THE PROBLEM: The MRI revealed a very obvious 1.5″-2″ tear in the RIGHT front straight sesamoidean ligament. JJ was compensating for it which caused minor concussive laminitis in the right front toe as well as a “relatively insignificant” tiny deep flexor tendon tear on the LEFT front, all of which explained why he was lame in both front feet. 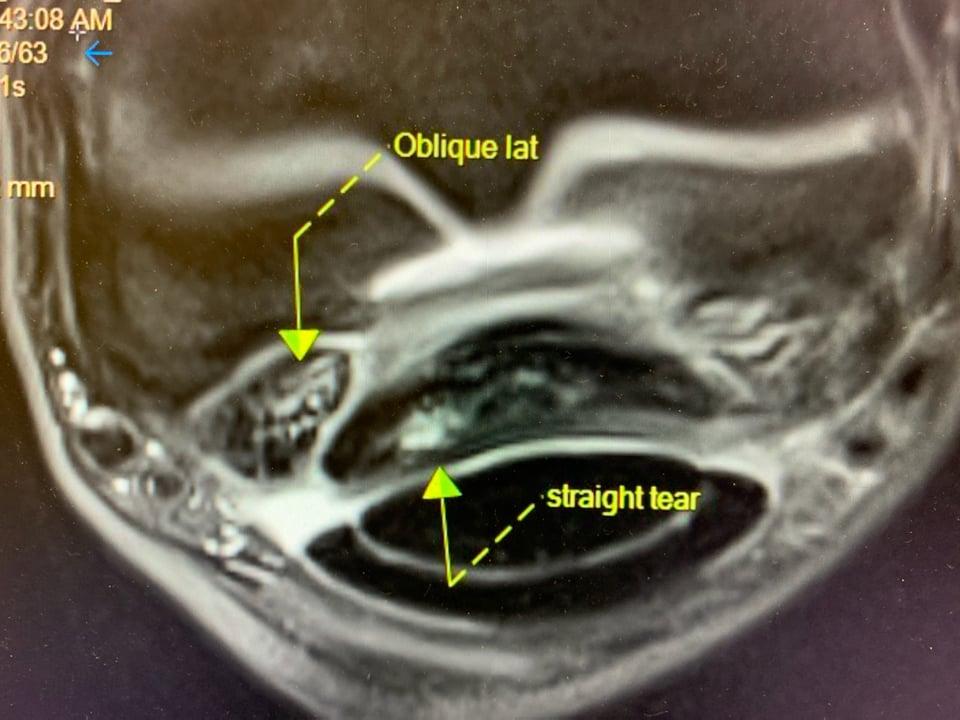 THE PLAN: Dr. Peroni did an ultrasound the next morning along with PRP therapy, which we did for his collateral ligament injury a few years ago. He also recommended mild corrective shoeing to help reduce the strain on the ligament, as well as full turnout and light tack-walking. We’ll do another ultrasound in 30 days to assess JJ’s progress.

THE FUTURE: If JJ does well with recovery, Dr. Peroni guesstimates a four-to-six-month recovery with JJ being able to get back to his previous level of activity without any problems. Fingers crossed! He also said that his joints all look fantastic, which is reassuring considering the kid’s 17 now.

THE CAUSE: Dr. Peroni said that with this type of injury, it would have been an “obvious event” while riding and I can’t think of anything, so that means either a) JJ has hidden it from me for a while which is actually kind of typical for him or b) it was a pasture accident. Either way, it makes me feel just a tiny bit better knowing it wasn’t my fault…

MORE INFO: It’s not a flexor tendon or suspensory ligament issue, which is good! But, given that this has already been “healing” for four months and it’s still a 2″ tear, I can’t even imagine how bad it was when it first happened… UGH. Why is my horse so stoic?? :'(

I couldn’t wait to pick JJ up on Wednesday and give him all the cookies.

Well, the same lady that took him on on Monday also brought him back to me today. She gave me a bag of his things (his shoes they had to take off, etc.) that had some leftover feed in it. I had packed exactly enough for his visit, no more and no less, so I was confused why there were any leftovers at all.

She said he hadn’t had breakfast (due to sedation for the ultrasound-guided PRP that morning) and I was like, well, then there should only be one bag left but there’s two…

She assumed they fed UGA’s grain for one meal by accident, and I joked that ‘OMG if he actually missed two meals, he must be so hungry!’ at which point JJ *immediately* made his food noise followed by his distressed noise in a very clear, “Feed me, I’m starving!” sentence. Uh… was he listening to us??

I’m happy to report that we had a safe trip home, and JJ enjoyed a quick hand graze before he rolled in his stall. I am SO incredibly grateful to the team at UGA for not only taking such great care of him, but for also giving us answers and hope. THANK YOU, Dr. Peroni and team!!

So… am I mad that the first vet wasted so much time (and money) chasing something it very clearly wasn’t? YES, absolutely yes. I even asked early on if it could be a soft tissue injury and they were so convinced that it was navicular (which we have now certified it ISN’T) that they said no. Maybe one day I’ll learn to actually listen to my own intuition…

Similarly, I DO feel guilty as hell though that it took so long to get answers and to get him relief. I wish I had pushed for the MRI earlier so we could have gotten started with treatment sooner, but I wanted to exhaust all of our other “less invasive” options first before having to put him under general anesthesia. Hindsight is 20/20, yeah, but at least now we’ve got a clear vision for the future, too.

For those wondering about the cost, because I *know* y’all are out there – yes, it was expensive but worth every penny. All in all, my UGA bill came in at $3,000+ for the MRI, PRP treatment, two night stay and associated costs. (Plus several thousand more in all the other vet stuff leading up to this visit, ugh.) I am counting my blessings here that I am able to afford it, though, thanks to my day job and a little gift from the Universe…

I knew these bills were going to be big, and I was worried about the expense. With freakishly perfect timing, I had two new clients come to me out of the blue for the month of June as they had gotten some pandemic Paycheck Protection Program money that they needed to spend in order to have their loans forgiven. They hired me to do marketing and web work just for a few weeks, and I am incredibly grateful for that little gift of unexpected extra cash that wound up being exactly what I needed to cover JJ’s bills. Thanks, Universe!

But, anyway… we’re officially sitting out the summer show season and I’m telling myself that’s actually a blessing in disguise, because the summers can be absolutely brutal here in Atlanta, and now I don’t have to school or show through that sweaty misery. And my horsey is gonna be okay, and that’s the most important thing ever. 🙂

Had a bad ride? Didn’t win your class? Just be grateful to be on your horse, to know that he/she isn’t hurting, and that your future together isn’t in question… because it could always be so much worse and every moment with him/her is still a blessing.