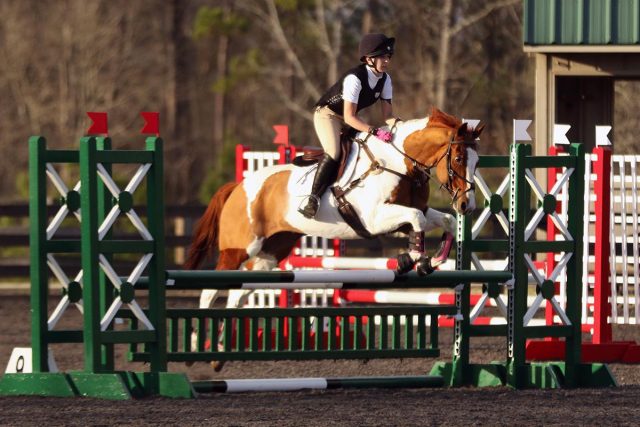 We survived! Our first Novice 3-phase after two years is officially in the books. Photo by Erik Jacobs / P.TEN Marketing.

After such an awesome, easy experience running BN3P at Rocking Horse Stables in Florida last month, I knew it was time to move back up to Novice where we were two years ago, before our injuries.

My friend and fellow Team Milym rider, Catherine Shu, recently purchased a fancy new baby horse (congrats, Catherine!!) and was planning to go down to Poplar Place Farm for their February schooling show and their first under new ownership. Her wonderful mom, Susan Shu, very generously offered to trailer JJ and let us tag along. There was only one catch – since our trainer, Miriam, had recently had a baby, she couldn’t make it and we would be on our own. Eep.

In the past, the idea of moving up to a higher, harder division would have triggered my nerves hardcore. The idea of doing it without a coach would have been a definite deal-breaker. Lately, though, my nerves have miraculously disappeared and all I care about anymore is having fun and finishing with a happy, sound horse. It’s been an amazing change for me and has made a dramatic, positive impact in our performance.

Another Milym member, Maris Barden, joined us for the event and the three of us arrived at Poplar on Friday afternoon to school the cross country course. We were all running Novice and had planned to stick together as a group, but once JJ got going, I realized that I was better off just letting him run as much of the course as possible in one shot. He gets SO pissy if I start/stop a bunch after just a jump or two. So, rather than school each jump one at a time, we wound up running the entire Novice cross country course straight through, as if it were a recognized event. I didn’t even really know where I was going since I had only seen the map and hadn’t walked the course, so trying to find jumps mid-gallop made it even more fun.

The course was actually pretty challenging for a beginning-of-the-season Novice as it included a ton of terrain, a half coffin, three water crossings, and four AB combos – but it was surprisingly easy for us. JJ was totally game and gave me zero issues at all, except when he found the unmarked “reining horse sliding stop at ditch” obstacle that wasn’t on the map… LOL. I almost went off, but managed to recover and got him over it the second time. Full disclosure: we haven’t schooled a ditch in two years, so I can’t blame him for being surprised by it.

On Saturday, our move up was rewarded by being able to sleep past 7 a.m. as our dressage ride time wasn’t until 1:28pm. I took JJ for a walk in the morning to let him stretch his legs, see the sights, and visit with friends, then we had a little nap together in his stall. Eventually, it was time to tack up and get going….

Usually our dressage warm-up routine is only 20-30 minutes, but our ring was running behind. We wound up being out in the hot sun for over an hour (it was 84*F in February! What the heck?!) and JJ was definitely annoyed. When it came time to finally go, though, he stepped up and gave me an absolutely LOVELY Novice Test-B with minimal fussiness. I was really proud of him, and we somehow managed to score a 35.50 – considering we had no coaching, I was beyond pleased with such a respectable score our first time back at Novice!

We headed back to the stabling area for some down time before stadium, which was also about an hour behind. Later, in warm-up, JJ didn’t seem to have his normal amount of “go.” When I put him to the oxer (which was definitely set higher than Novice, more like Training) he stopped. I stayed on, regrouped, circled back to it, and popped over. I figured if we could manage that, everything in the actual course would be cake.

The stadium course itself was fairly straight forward with simple jumps and no filler. I over-rode #2 because of what happened in warm-up and we pulled a rail – I take 100% blame for that – but everything else was fairly effortless, even at the higher Novice height! Awesome!

Originally, we were scheduled to run cross country about 15 minutes after stadium, but because of the delays elsewhere, cross country was behind, too. Regardless, we walked over to wait around, and did a little warm-up. For some reason, the only practice jumps set were about 12″ high and there was a tiny Amoeba cross country jump… so, we didn’t get to do much. JJ still felt a little sleepy, and I should have paid more attention to the fact he needed a bit more pep. Hindsight is 20/20.

After some more waiting, the starter told us we were ready to head into the box. JJ seemed alert-ish, but still not quite his usual “revved up” self. We took off and popped over #1 with no problems, but #2 was big and took him by surprise, and he gave me a hard stop.

JJ: Oh, crap, are we on course?! I didn’t realize. You didn’t want a ribbon anyway, right?
Me: Yeah, well, let’s go do that again and actually jump it this time, okay?
JJ: You got it. Sorry, mom!

Needless to say, once he got the memo, he was perfect the rest of the way through and we didn’t have any other issues. We crossed the finish, and despite the stop, I was thrilled. I was beyond proud of JJ for being such an awesome partner and for having such a great work ethic. My whole goal for the weekend was simply to finish on a number and not a letter, and we did exactly that – even with what was one of the most challenging Novice cross country courses I’ve ever seen! 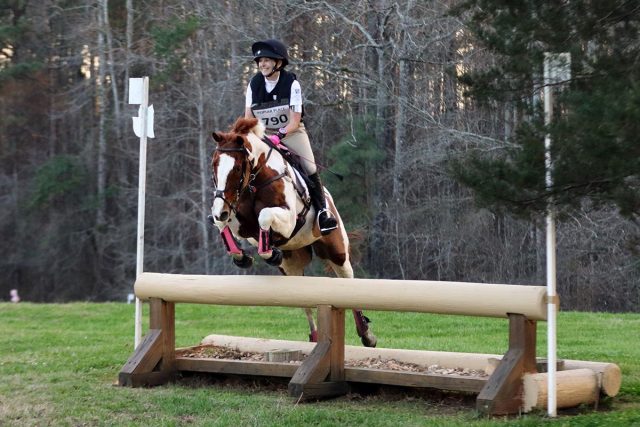 When you spot your husband with the camera and smile so the pic comes out better. 😉 Photo by Erik Jacobs / P.TEN Marketing.

One thing I noticed during the event was how much energy I had. In the past, I would feel absolutely wrecked when I crossed the finish, but this time I was relatively unaffected. The reason? Starting the Thursday before the event, I ate as much as I could. I focused on protein and stockpiling “fuel” that I knew I would need to make it through the more-challenging division – and it made a big difference in my performance!

Overall, it was a great weekend. I expected the move up to be way more challenging, but it was fun AND easy! Even though we were “alone” from a coaching perspective, we certainly weren’t alone at all. My husband, Erik, was there to be my biggest supporter, my teammates were wonderful, and my friends were all so encouraging. It was great to see many faces that I hadn’t run into in a while, including Taleen Hanna who surprised me by showing up to cheer me on, and Halliea Milner of Go With It Farm, whose love and support means the absolute world to me.

In order to perform at its best, your body needs fuel. Eat the burger, eat the fries, eat it all. Having that extra energy will make a big difference! And definitely don’t skip dessert. 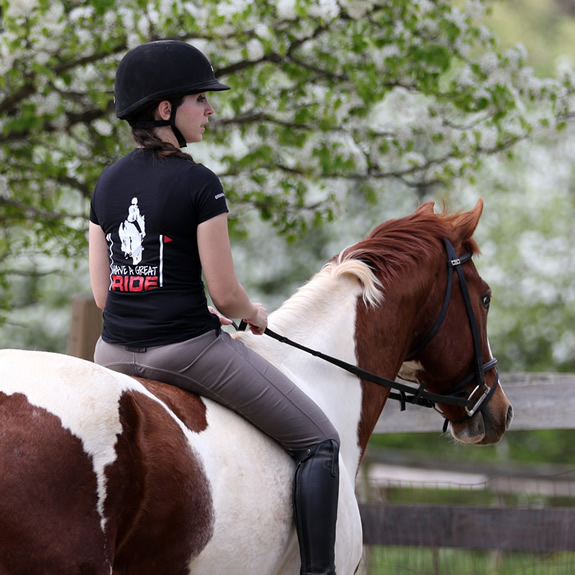