In this week’s Lessons Learned, Ainsley Jacobs takes a look at what she learned from competing in less-than-desirable weather and footing conditions. 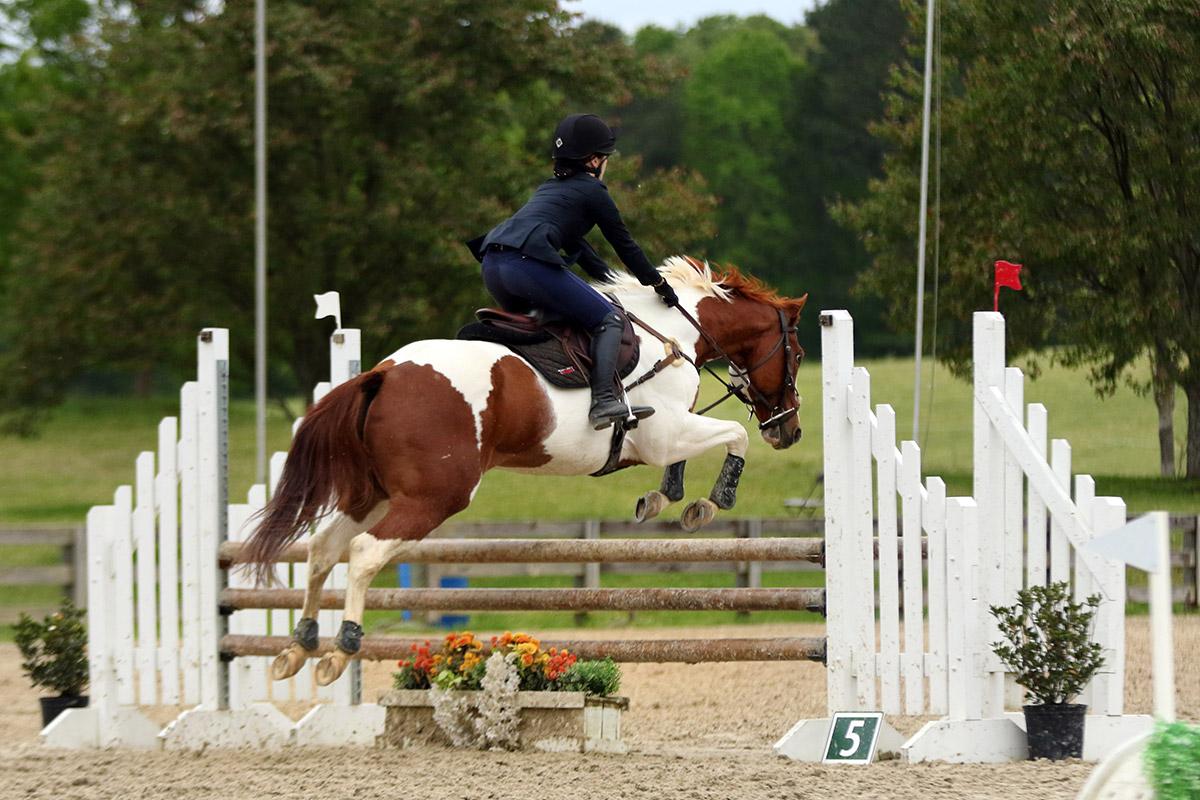 JJ being perfect, as usual. Photo by Erik Jacobs/P.TEN Marketing.

Although it was originally supposed to be our first Training 3-Phase, I’m happy to say that our second Training CT is in the books!

The week before, coach Lauren Turner got the flu (poor girl!) and was laid up in bed during our usual Tuesday lesson. Thinking back to the last time I suffered the same fate, I didn’t know if she was going to make it to our event that weekend (and wouldn’t blame her if she didn’t), so I mentally prepared to have to run my first Training 3-phase on my own. Not that I wanted to, but the fact that I didn’t immediately start crying and talk about scratching shows how much stronger my mental game has gotten.

Fortunately, Lauren recovered quickly and was able to give me and JJ a good flat lesson on Thursday. After, I packed my gear and trailer and headed home to enjoy a nice dinner with a good friend who had come in from out of town.

That night, one of the worst storms in recent years rolled through the area, complete with torrential rain, insane lightning and a few tornadoes. I, however, was blissfully unaware due to the fact that I had enjoyed a massive milkshake at dinner and – wanting to prevent any sugar-induced sleeplessness – had wisely arranged a meeting with my good friend Ambien. 😉

Friday morning I woke up well rested (storm? what storm? LOL) and headed over to Beaumont Farm to hitch up. It was still raining, and I was really glad I had packed everything (including hay) the night before so I didn’t get too soaked. My lesson buddy, show partner in crime and fellow business woman extraordinaire, Mary Campbell of Mare Goods, met me there and together we got our kids loaded.

The drive to Chatt Hills wasn’t bad, I just went slow to account for the conditions, and we arrived on time. However, as we pulled in, I noticed the teeny tiny little creek that usually doesn’t even register on my radar had overflowed and had completely flooded the road to enter the facility. I thought briefly about “just going for it” but didn’t want to risk being one of those idiots who got washed away and wound up on the news – especially with the horses in the back.

Almost immediately, though, my knight in shining Kubota appeared, and one of the facility’s workers assured me that I could take a small bypass – even though it was also flooded. He had smartly marked the road with stakes so we could stay on the path, and had measured the water at only about 12″ – we should be able to clear it. So, I powered on and forded the river with my trusty Ford. We didn’t float away (or die of dysentery), so that was a plus.

The river had flooded a large portion of the XC field, so schooling wound up being cancelled. Bummer. 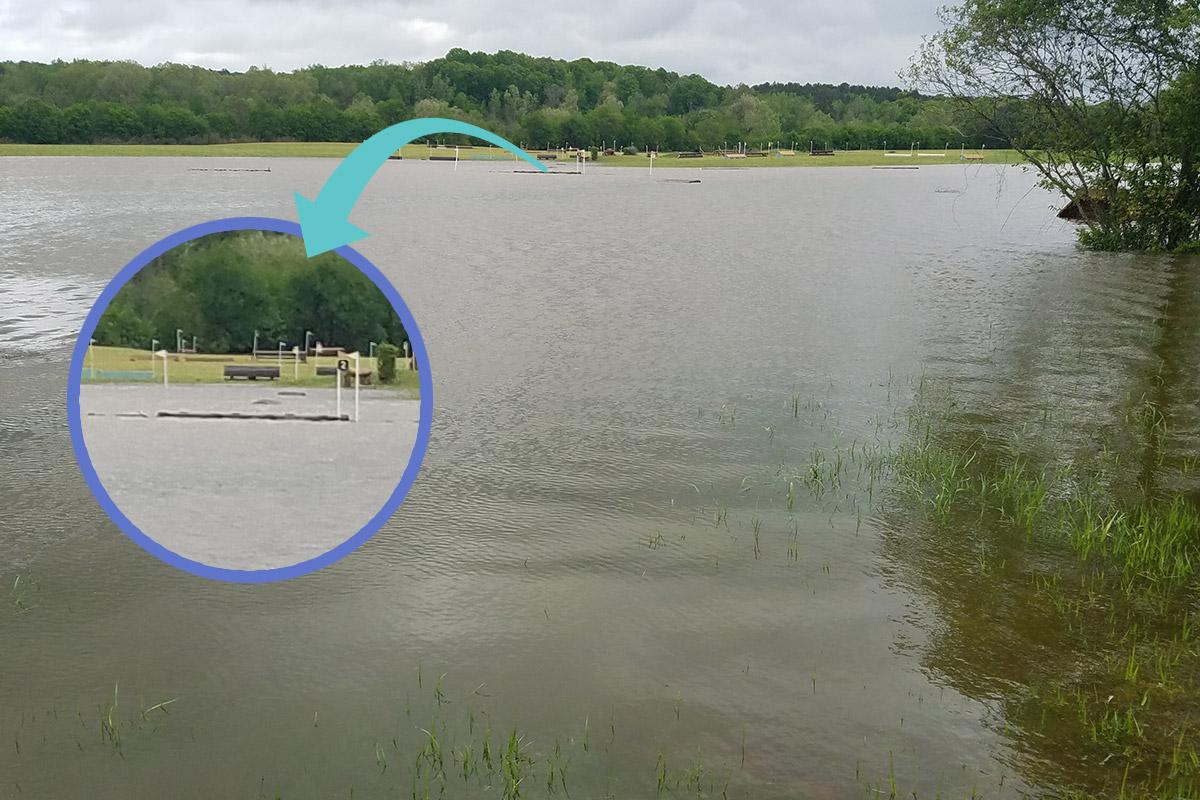 That’s 3′ of water, washing away my 3-phase hopes and dreams. Photo by Ainsley Jacobs/Ride Heels Down.

With the day a wash out, I settled JJ in and froze my ass off – the forecast had originally shown temps in the 70s, but it wound up being in the 50s (with 40s predicted for the overnight) and I was woefully under-dressed. And wet. And miserable.

To make life better, our River Birch Farm team had dinner at a local Mexican restaurant. ‘Cause cheese dip is the remedy for everything.

During dinner, Lauren gave me a “course walk talk” and ran through every jump with me and how to ride it… because the plan, at that moment, was to still run XC. That meant I would be doing my first Training 3-phase without having schooled it first, like a recognized. Oh lawdy. Cue me wanting to throw up.

(I gotta mention: my husband, Erik, was planning on coming on Saturday to watch, but when he heard how wet and cold I was, he drove down late Friday night to come to my rescue with a bunch of dry, warm clothes so I wouldn’t have to wait on him the next morning… #herohusband)

So. The Chatt Hills team had hoped the river would recede by Saturday morning, but when we woke up, it was STILL RAINING and the flooding had actually gotten worse. They made the call to cancel XC completely and run all the 3-phase divisions as CTs instead. I was partly relieved and partly disappointed, surprisingly – I really wanted to try that Training XC course!

Anyway, with my 3-phase hopes and dreams (temporarily) on hold, we got ready for dressage. A friend of mine from the racecar world/my day job, Joe Charles, and his totally awesome daughter, Danielle, came out to brave the weather to watch. Danielle rides hunters and is curious about this eventing stuff, so it was really fun to have her there and get to show her a bit of what we do. 🙂

JJ and I headed down to the sandbox and it was, to put it mildly, not our best work (I feel like I say that a lot?). He was totally jazzed from the unexpected cold snap and the wind, and I just tired to manage it as best as I could. We had some really nice moments in our test, including a fairly decent left lead canter lengthening, and some really giraffe-y moments, including going back to a collected canter after said lengthening. G, halt, salute, celebrate that it’s over.

We had about an hour to kill between phases, so JJ snuggled in his stall and I did the same in my car. Finally, it was time to go down to jump so we could be done and go home and get dry!

The warm-up arena for stadium jumping quickly devolved into a combination shit-show thanks to the wind and the wet, and pretend hunter arena as we were all hollering “on your inside!” “taking the outside!” so we wouldn’t kill each other as we passed. It was somewhat comical. One girl had her hands full managing a clearly freaked out young horse (seriously, she did an awesome job) who was bucking, kicking out, rear-spinning, and generally actin’ a fool. At one point he tried to get JJ involved and my saintly little horse was just, like, ‘meh, that’s too much effort’ and trotted by without flicking an ear. Love him.

As we were going around, I’ll admit there was a moment where I felt really intimidated. Here were all these fancy, purpose-bred, purpose-built eventing machines with their long legs and fabulous physiques… and my compact little stock horse. I felt outclassed, like we were pretending and had no right to be there.

I’ve been working a lot lately on the mental portion of my riding, and recognized that negativity as soon as the thought popped into my head. I quickly told myself to STFU, and reminded myself that we had worked just as hard as everyone else and YES, we actually DID deserve to be there. Instead of being intimidated by them, I chose to (hopefully) believe they thought it was cool that we – the underdogs – were there, too.

After an okay-ish warmup, we parked by the in gate and waited to be called by the lovely Aly Rattazzi who was managing the chaos. The cold began to set in again, and I realized that my car accident broken foot was completely numb. Uh oh.

There was a stone wall at jump #4 that went straight towards some scary, flappy flags that a lot of horses were stopping at, so when we went in to wait for the bell, I made sure to show it to JJ – and he didn’t care one bit. We started our course and he felt really great, despite the slippery, wet footing sucking away some of his energy.

As we approached #4, he seemed okay but I gave him a crop tap on the left shoulder just in case, since he usually ducks left… but the little bugger ducked out to the right instead!! I stayed on, thankfully, and circled back to it only to have JJ go over flawlessly, like he had seen it a thousand times. Whatevs.

Despite not being able to feel a thing in my left foot, we made it through. We finished up the course with no other issues, ending with one rail, the one refusal, and some time for having to make the circle. People even said our round looked good – although I’m not sure if they were being serious or just being nice. 😉

Overall, I was really proud of JJ. I know he is starting to max out at Training, and he really tried so hard. Despite the cold, the wind, the rain, and the less than ideal footing, he gave me a great effort and that’s all I can ask for.

We have worked hard for it, and we absolutely deserve to be here. Also, PACK ALL THE THINGS.