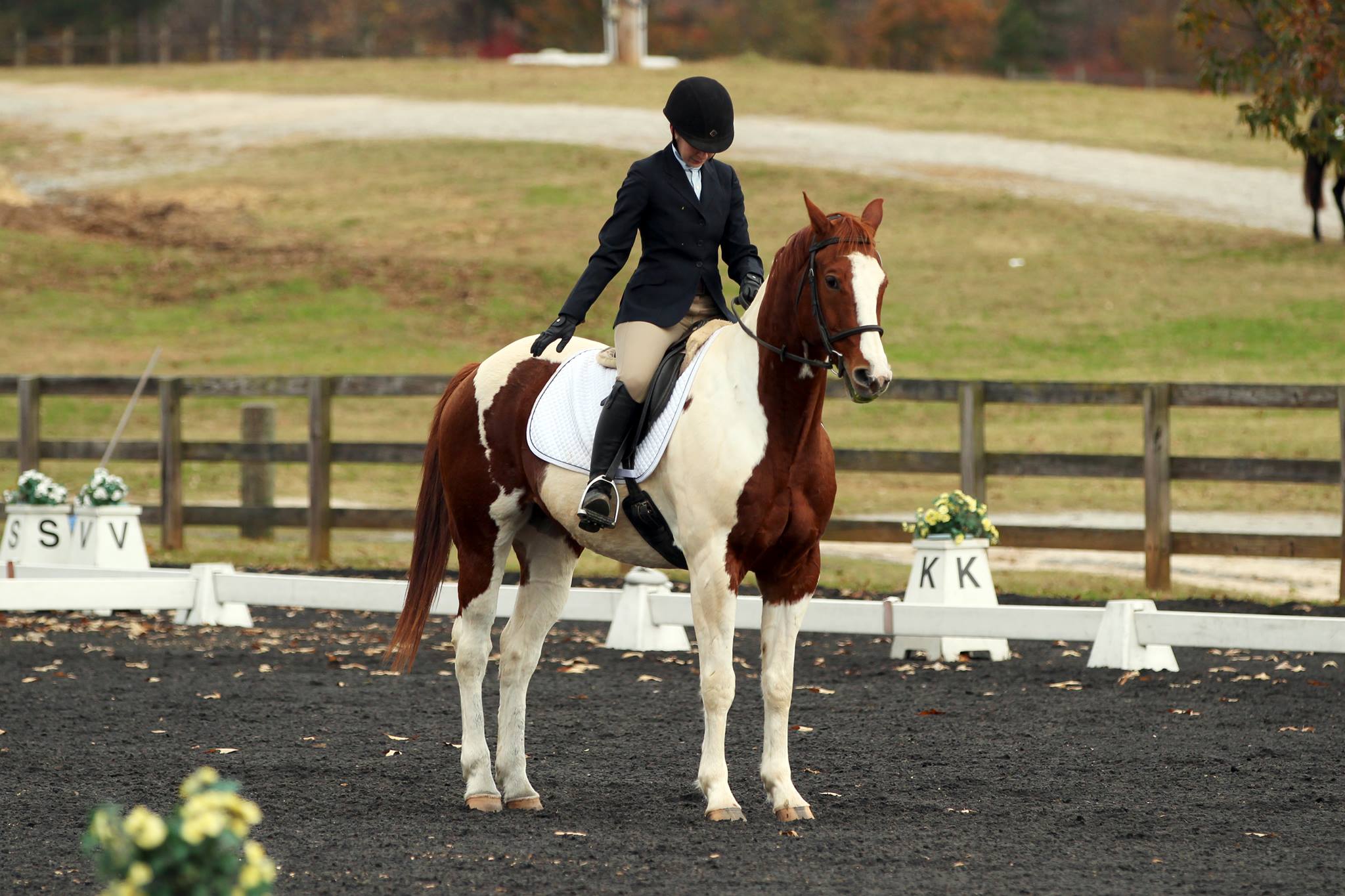 Our dressage was lovely! Photo by Ride Heels Down

We’ve been on a roll lately where we’ve had more success than failures, and I was excited to get back to Poplar for another 3-phase. Poplar’s cross country course is a lot of fun – while the terrain is challenging, the jumps are inviting. I figured it would be an easy, confidence-boosting weekend… I was wrong.

This was the first event since I started competing that my husband wasn’t able to make it to. While we’re on the subject, let me take a minute to talk about what an absolutely wonderful, incredible, amazing man he is – I am SO blessed that he chose to spend “forever” putting up with me.

Erik has never once questioned my love of riding, and is my biggest supporter when it comes to eventing. He attends every event, is up at the crack of dawn without complaining, and works tirelessly to capture every moment (and every jump) for me in his wonderful photos. I am a very, very lucky girl. So, when he couldn’t make it to this event due to a work conflict, I certainly wasn’t upset.

Our Go With It Farm did our traditional Friday night cross country schooling session, followed by a fun team dinner. Then, it was off to the hotel to get a (short) sleep. The next morning, we got up bright and early to go take care of the babies and drop feed.

As usual, we started off with dressage. We rode Beginner Novice B, and JJ felt pretty good. I left the arena feeling confident that we had scored a little better than usual, and I was right! We wound up with a 39.25 – our first time dipping into the 30s since January!

I tacked up for stadium, and there wasn’t even a question in my mind that it would be anything but perfect. We’d gone double clear at every single event we’ve attended, and I just assumed the streak would continue.

I waited in the warm up arena for my trainer, but unfortunately, she was stuck elsewhere as ride time conflicts had popped up. I waited, and waited. I knew better than to warm myself up without her consent. Eventually, the ring steward told me “you have two minutes to get in the jump arena and do your course, or you’ll have to scratch.” Cue panic-mode. I saw my trainer running down the hill to come warm up me, and I proceeded to hurriedly trot/canter around. She had me pop over three jumps, and I just continued straight on into the main arena without stopping.

We got through the first few jumps of our course just fine, but my adrenaline was still pumping. I remember somewhere around jump four or five, I told myself ‘Hey, you made it. There’s no need to keep rushing, they can’t scratch you now! Chill out!’ and so I settled JJ’s pace back to that of a normal horse rather than the rushing beast he had been. We hit a few more jumps perfectly, and I was feeling good.

We went through an outside line with perfect distances, passed the in gate, and turned left towards a single hanger jump, the American flag jump. Two strides out, JJ stopped and ducked right. HARD. I went off. HARD. I remember thinking “What?! JJ doesn’t stop! Why am I falling?! Noooooo!” and then I hit the ground on my left hip. Later, my trainer told me she had been just as shocked as I was and she didn’t see it coming at all. She doesn’t think he actually stopped maliciously, but rather he was surprised by the fact that the jump was there and spooked.

Of course, I got back on and schooled the fence, albeit at a trot. We got over it, finished our course, and exited the arena. Back at the barn, I pretty was shaken up. Not because I fell, but because I had zero warning and it caught me completely by surprise. That was the scary part.

I chose to end my day and not bother riding my cross country course, as I didn’t want to risk falling off again in my injured/weakened stated and potentially hurt myself even more. I fractured a few vertebrae in my back and compressed a few discs back in ’98, so protecting my back from injury is always a priority for me.

Not gonna lie – now I’m freaked out about the American flag jump. A bunch of other horses stopped/refused it that day, and when I was talking to an eventer friend of mind about what happened, she said “Oh, it was the American flag jump, right? Yeah, that thing gets a lot of people.” Ack! Stadium has always been so easy for us, and now that’s my biggest source of anxiety. I’m looking forward to going back and trying again next month, but I’m definitely nervous as hell now… 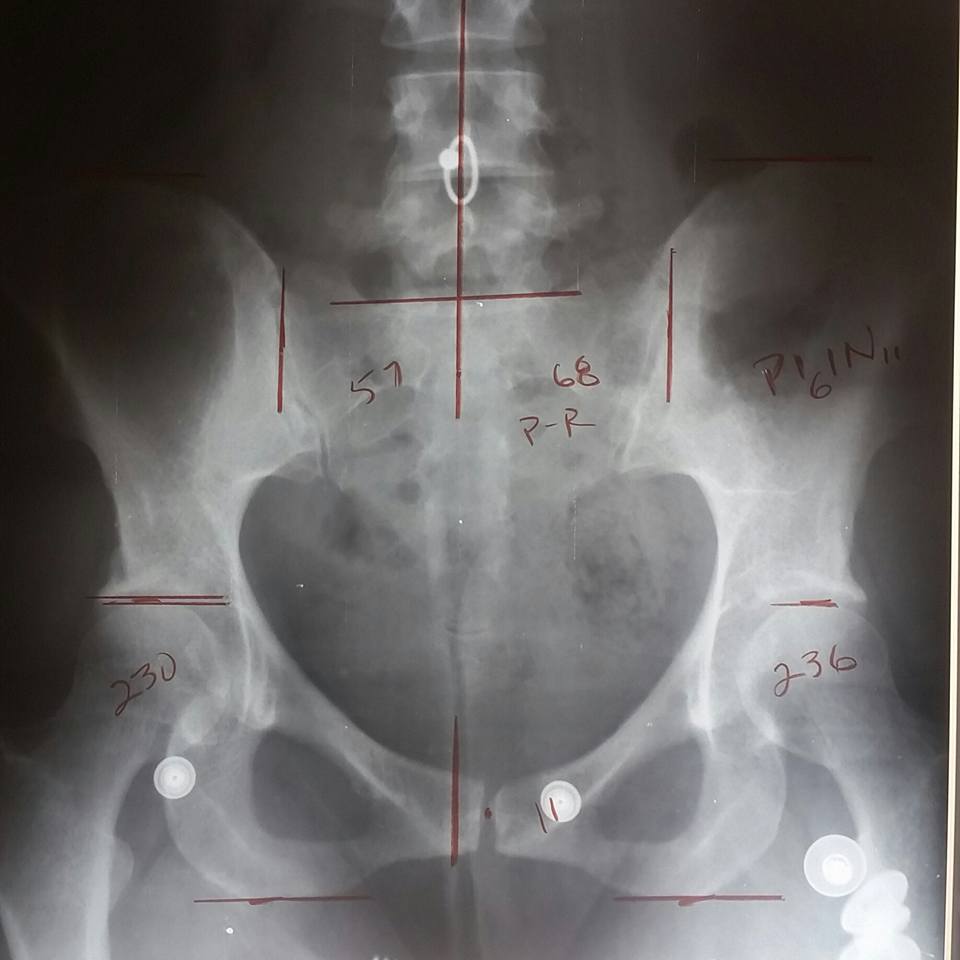 In this X-ray, you can see how far off center my pelvis wound up (11mm) after the accident. Real talk: it HURT! Photo by Ainsley Jacobs / Ride Heels Down

Don’t take anything for granted. Even if your horse have never stopped at a jump in his life, things happen. Ride confidently, ride consciously, and ride competently. The ground is hard – you want to wind up there by choice, not by surprise.