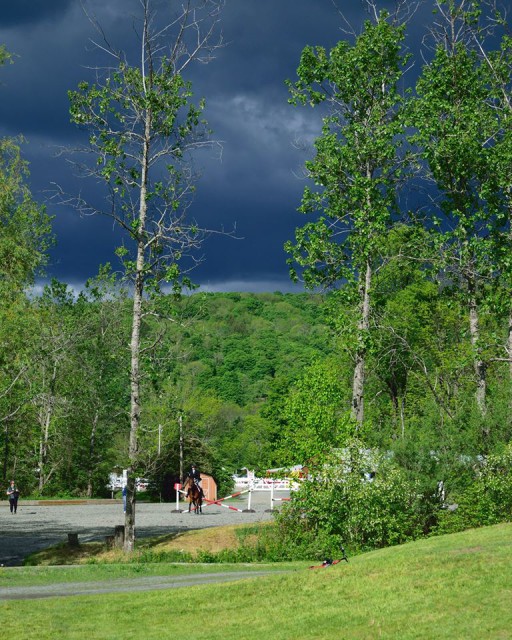 Vermont scenery never disappoints. If you don't like the weather, just wait - it will change. Photo by Lisa Ambrose Cook.

Deszi competed at GMHA this weekend. Two gorgeous days in Vermont at a spectacular venue. Their new footing is holding up brilliantly, the courses were pristine, and the drainage systems were working hard after the rains earlier in the week.

With all this positivity, I thought we were poised for success. I thought wrong – at least in the manner in which I chose to define success for the weekend at that moment. In other words, I was hoping to win. We did not win.

Deszi’s dressage was not the quality of our performance at Hitching Post. There was tension, and she was working against my hand throughout the test. My favorite part? We had the same judge this past weekend and at Hitching Post (No, seriously, I was really excited about this!).

I was looking forward to reading the comments, comparing her notes to my own, and reviewing the two tests side-by-side. Although Deszi has consistently placed in the top after dressage at her three other USEA novice competitions, this was not one of them and accurately reflected her youth and inexperience. The judge noted this, and she was spot on.

Show jumping followed later in the afternoon. A very inviting course, with plenty of distance between fences and honest approaches. Deszi was a star and casually navigated the course. There were several fences I chose to move-up to instead of asking for a deeper distance. The deeper distance is quickly becoming a strong contender for us, but it has not yet become consistent.

The last related distance down the long side started nicely and ended poorly. I waited for a closer distance, Deszi misunderstood. From the video, it looks like she placed one of her front hooves down for that last, closer stride, got confused, and jumped long anyway. She tagged the rail with her hind and it fell from the jump cups.

We recovered and jumped the final fence in good form. She was unfazed, and went right back into “work mode.” She is a diligent mare with great focus. I was most pleased with her simple lead changes. She was on point, shifted her balance right away, and picked up the new lead immediately. A great step in the right direction toward flying lead changes.

Cross country was fun. It is so cool to ride a young horse that looks straight ahead, locks on, and canters up to the fences with the casual confidence of a school master. And her gallop is brilliant. As we climbed the hill between fences at the start of the course, I enjoyed every ground-covering stride; effortless and smooth. Her adjustability has improved drastically since this spring in Aiken. She has grown in height and strength, developing significant muscling.

She has a chill attitude about cross country: confident and bold, yet composed. She assesses the fence, environment, and surrounding stimuli as she works over the terrain. She jumped around beautifully, and I couldn’t stop smiling. I adored this ride on her, but more importantly, I appreciated the experience we created over the course together.

After the great cross country run, Roger and I had our typical post-competition recap of the event. I reminded myself that she has been in consistent training now for only a few months. Last year, she was ridden for three weeks and then had the remainder of the fall and winter off due to a bone chip surgery, rehab, and the winter (ie: pony holiday).

She is a remarkable horse and has many more shining moments just waiting to be polished and shown to the world. Deszi is more confident then Garth was at this point in his training. Amazing how speaking with Roger brings so much clarity, and a more accurate perspective of how things are versus how I think they should be.

Here’s a little sneak peak into my psyche: I am far more competitive that I realized. I am competitive with myself, not wishing ill upon my competitors, but I do not enjoy losing. And by losing, I mean not bringing home the blue. But, it is the generosity and pure honesty of a young/green horse that sets me straight every time. Despite not bringing home the blue, there were many winning moments for us. And that is the most important piece within my partnership with horses – continuous growth and improvement, not the ribbons we hang on the stall doors.