As Tyler Held moves on from her time working alongside Jennie Brannigan, we caught up with her to reflect on her past few years as an international groom. Of course, Tyler’s a multi-skilled pro, meaning she’s got multiple pursuits in her sights at any given time; currently, life is taking her down the path toward earning her doctorate in sports psychology. Read on for Tyler’s take on grooming, life in the sport of eventing, and mental health. 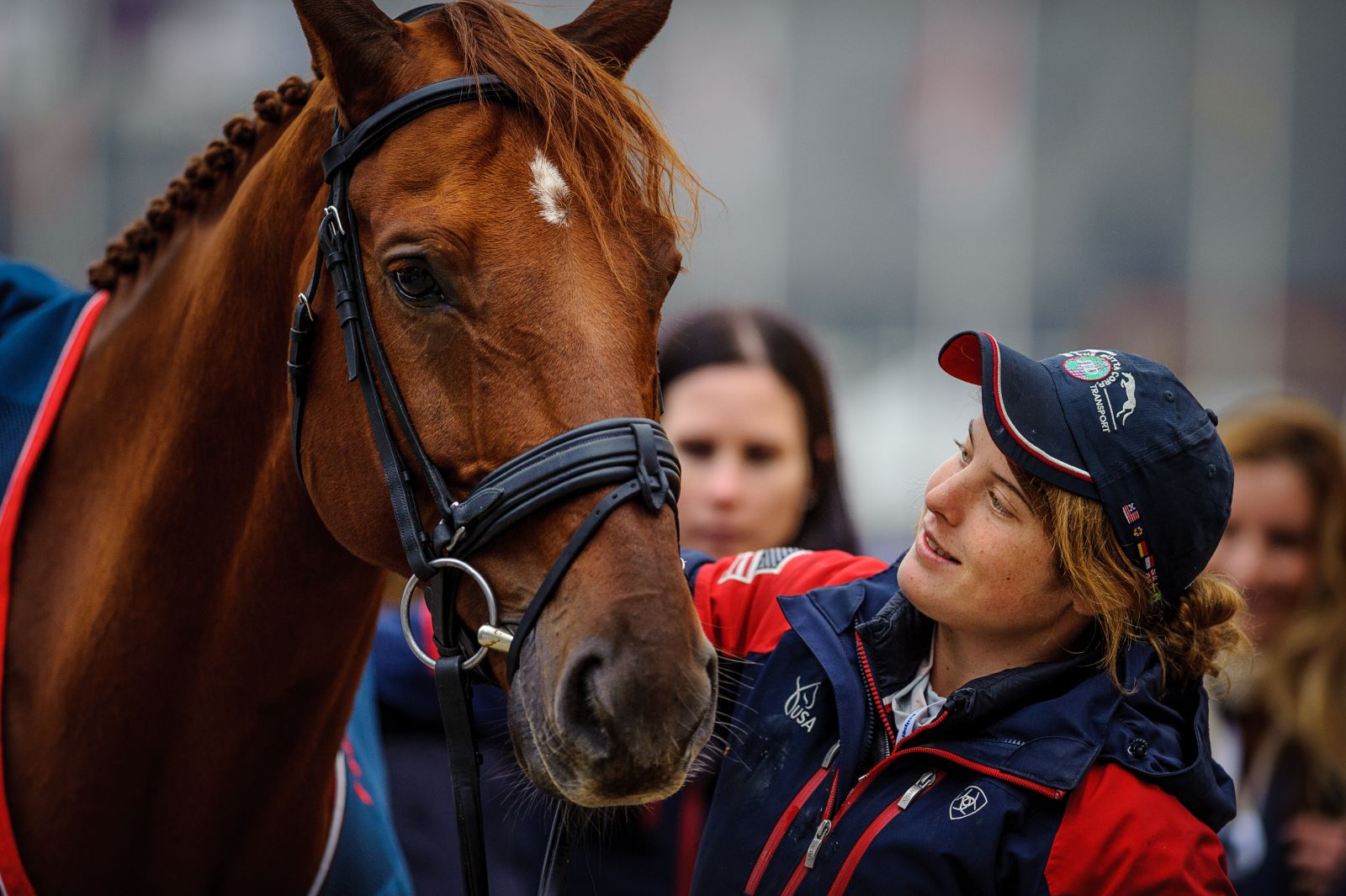 In many ways, our sport can be somewhat insular — for better and for worse — but in others it can provide a wealth of experiences that make for a rich and full life. For Tyler Held, a lifetime with horses supplemented by a keen interest in sports psychology, Brazilian jiu jitsu, and the concept of balance and fulfillment has provided an open perspective and a clear idea of what her next steps will be.

Before Tyler became a full-time groom, she competed and held higher riding aspirations. But life had some changes in store for her. “I think I thought I knew a lot more than I did back in the day,” she described. She spent some time as a working student at Waredaca as a teenager and had an off-track Thoroughbred she’d ridden through Training level. But, as Tyler describes it, “something never really clicked with that horse”, and eventually she found herself increasingly drawn to grooming and horse care rather than competition.

Eventually, a gig as a vet tech for Dr. Kevin Keane and a connection to longtime Phillip Dutton groom and barn manager Emma Ford would lead Tyler to her most recent job: working for Jennie Brannigan. She can still recall the advice Emma gave her then: “She called and told me, ‘if you want to do this and do it right, you have to go work for Jennie. That girl is going places’”.

During Tyler’s first competition, at Carolina International in 2019, as a part of Jennie’s team, she fell on cross country and broke her jaw. “It was quite a dramatic way to start off!” Tyler said. Luckily, Jennie’s injury healed successfully and she was soon back competing, though 2019 would throw some additional challenges her way — Jennie describes the end of that year as among the lowest points in her career. 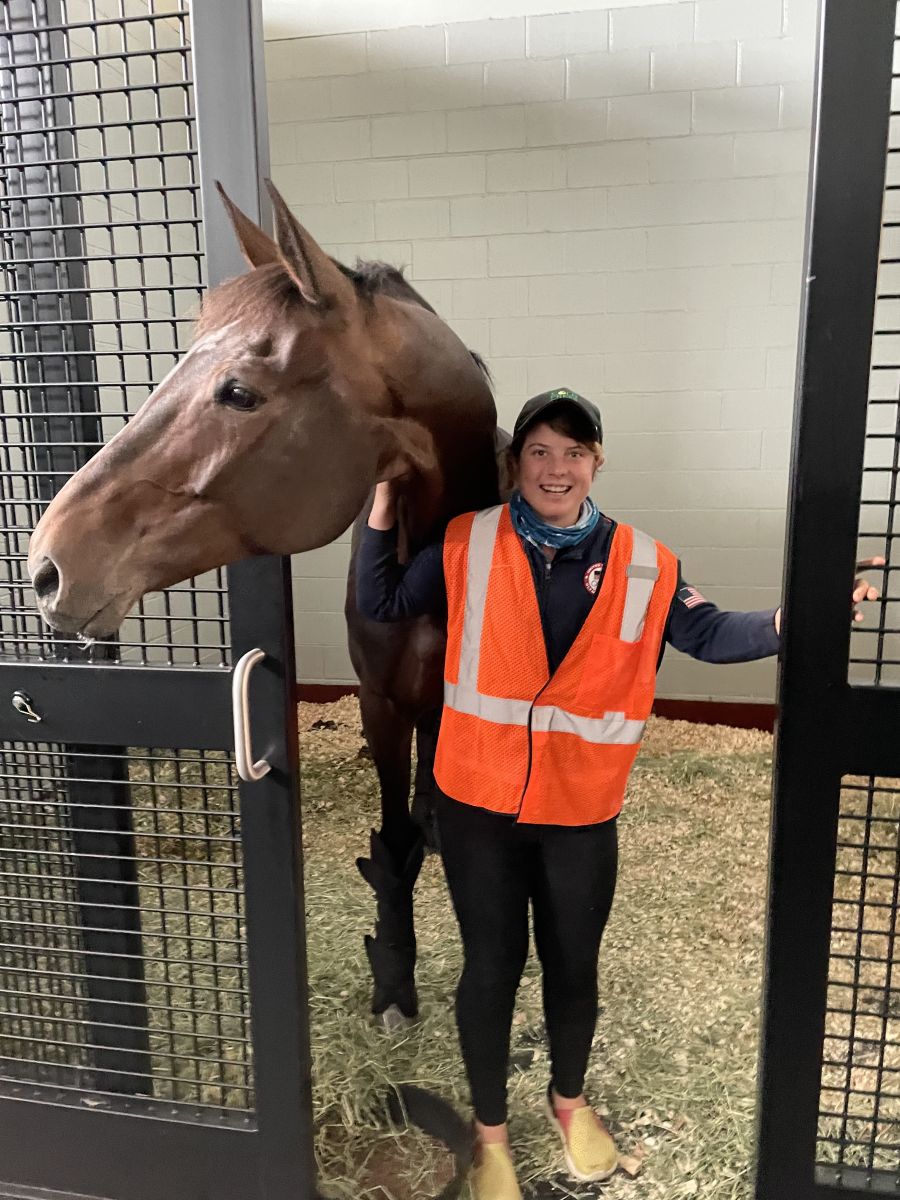 On the road again! Photo by Meredith Ferraris.

Through the pandemic, Jennie credited some reorganization of her focus and mentality for her sense of confidence coming into the first full post-pandemic season in 2021. It would wind up being a banner year for Jennie, who collected 10 top five finishes in FEI competition, including a fourth place this fall in the inaugural Maryland 5 Star with the Stella Artois Syndicate’s Stella Artois. She also finished 15th individually as a member of the silver medal winning Team USA at the Boekelo Nations Cup in October. For Team Brannigan, it was a season of highs that everyone chases and but only sometimes experiences through some mixture of determination, hard work, a dash of luck, and enough stubbornness to weather the tough days.

“It’s really taught me grit and determination, seeing what Jennie has overcome in her career to seeing her get this high point this fall,” Tyler reflected. “I think of what a team effort it’s been. We have a great group of people in the barn who help each other learn and grow.”

Tyler’s interest in sports psychology has lent itself well to her career as a groom, but it’s also the reason why she’s stepped away in order to finish her education. Eventing is a sport brimming with mental challenges, and in order to maintain focus and calm (and, let’s be honest, sanity) there must be some sense of balance. Without it, this life consumes you. It’s Tyler’s goal to help more people — riders, grooms, and everyone else involved in this lifestyle — achieve that balance.

“Leveling up with mindset is not just working harder or more hours,” Tyler explained. “I’ve always been a really hard worker, and at one point I just hit a wall. And in this sport, a lot is learned from doing things wrong.”

“Too many issues of mental health and wellness aren’t being addressed in this sport,” she continued. “It’s applicable to the pro or to the adult ammy who just wants to do it for fun. When you struggle, it’s just not fun anymore, so it’s important to keep a healthy mental relationship with the sport.”

Through her work on The Whole Equestrian podcast alongside fellow eventer Emily Hamel, Tyler hopes to spread this message to whoever will listen. The environment at Jennie’s is one she uses as a benchmark for that buzzword — balance — and an example that it can be achieved.

“Jennie has been very good to me,” she said. “She makes sure we don’t get burned out and have time off. And from what I’ve witnessed, that isn’t always the industry standard. We work hard, but in a certain structure. We have lives after work and we do things outside of horses so that when we are in the barn, we are fresh and love what we do. People burn out — it’s a very real phenomenon. And I think equestrianism is a few steps behind the times in being stuck in the old ways of grit and ‘just put your head down and work harder’, but there is actual research that shows that isn’t the only way to go.”

As she caps off the year of a lifetime and moves on to the final steps of her doctorate, Tyler looks back with a sense of gratitude for all she’s gotten to be a part of. But, any eventer worth their salt will advise you not to let your highs get too high or your lows too low. “There’s always a Monday after,” she explained, just after reliving the epic experience that was the Maryland 5 Star in October. “And if you can’t go in the barn and just enjoy spending time with the horses, the sport will wear you down quickly because there is always another day. And just because it goes well today doesn’t mean it goes well tomorrow. So you take joy in the day to day.”