We couldn’t think of a better Easter present for EN to deliver to you  on this Good Friday than another installment from the delightful Lissa Green.  We know how much you enjoyed getting to know her, and her horses, and we’re completely delighted that she’s found the time to write again with news of TWO events, and more…Happy Happy! Thank you Lissa, and Thank you of course for reading.

What a lovely Winter we’re having this Spring…. I know we English are always talking about the weather, but it is so ridiculous and affects so much of our lives that it is right at the forefront. Despite it all the horses have continued to live out with plenty of rugs and food and look really well on it. Somehow I have managed two events this season even with all the cancellations. Only my two Pre-Novice’s have been out, they did an Intro at Tweseldown and a BE100 at Aldon. Since February I have had the lovely Fleur helping me out, but Mum and I are so unused to having help, especially at events, that we sometimes find it difficult to hand over tasks. Poor Fleur, but I think she is getting used to us! 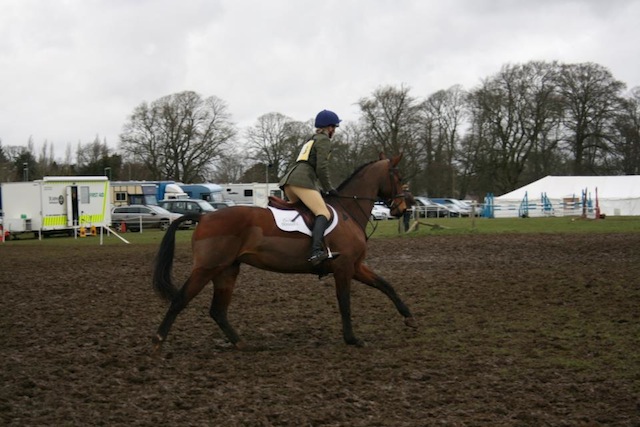 Daisyonfire plotting during the warm-up for show-jumping at Aldon

Daisy surprised us all at Tweseldown Intro. Despite shrilly introducing herself to everybody in both the dressage and show-jumping warm up she behaved remarkably well in all three phases and scored her first placing to come 5th. At Aldon she reminded us of why she came our way… She took the law into her own hands in the Show-Jumping, spooked to stop in the middle of a double which engendered a whack to which her indignant response was to bolt over the remaining four fences…three down was light punishment. We took drastic measures and in the intervening hour before the x-c Jack’s supportive owners drove mum eight miles to borrow a double bridle from a friend (the only thing known to stop her out hunting) as once this mare knows she can get away with something then she will continue it. As we were about to start the Cross-Country the red light came on to hold the course, not because of a fall but because of the weather. Daisy and I tried to hide under the leafless trees to shelter from hailstones that quickly left the ground sheet white whilst everyone else went inside the starter’s caravan. Mum stood with us holding onto poor Daisy and trying to keep a rug on her bum. When it stopped a good few minutes later they kindly asked me if I wanted to run, when I replied yes they looked quite shocked but allowed us to go in 15 or 30 seconds, I chose 15 as Daisy and I were so cold. Having been such a nightmare in the Show-Jumping she was angelic on the cross-country, she gave me a fantastic ride, eating up the obstacles whose take-off was made difficult to judge by so much mud being splattered over the fence. The poor horse still had hail stones in her mane when we crossed the finish line. I couldn’t have been happier with her performance and her attitude in the dire conditions. Mum’s three short days hunting her in October with the Beaufort had certainly paid off. Following our round, the rest of the event was abandoned which was such a shame because they haven’t had to cancel in 37 years. It was a sad moment for all those who work tirelessly to give us this brilliant event twice a year.

Raffa (Boleybawn Free) is still a baby but learning fast and is really starting to know what it’s all about. However she did as good as stop at the first cross-country fence at Tweseldown, very embarrassing… but it shocked our act together and she finished clear with just a few time penalties to add to our dressage score to end up 5th as well. I couldn’t actually believe it, prizes are so few and far between that I didn’t even check the score board for Raffa and left having been over the moon with hearing about Daisy’s 5th place…two placing’s was out of the question – so lucky. Raffa then was stoic at Aldon, you could feel she wasn’t comfortable with the ground, it was very muddy and sloppy, but they have to learn to go in all conditions. It took her the Dressage warm up, the Dressage test, the Show-Jumping warm up, the Show-Jumping round, the Cross-Country warm up and quarter of the Cross-Country to find her feet in this ground. She wobbled in between the first three fences out on course asking me if I was really sure I wanted to continue, when I replied yes (more than once) she bit her lip and threw her all into it and not only did she discover she could do it on this ground, but she could do it well. What a trooper. I admire her show-jumping too as she wasn’t jumping in her usual style and needed her hand held, but she didn’t touch one. After all that I think she thoroughly deserved her 7th place in the BE100. So proud. 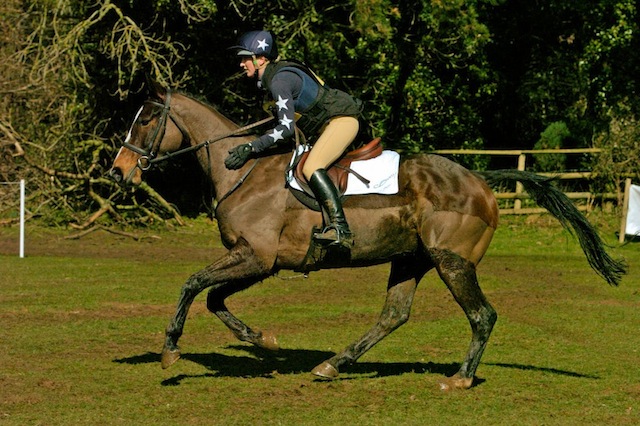 Boleybawn Free at Aldon, where the sun shone for exactly ten minutes (Photo by Tanzy Lee).

Jack (CTS So What) is mortified he hasn’t been out yet “to strut his stuff. ”  He is such a show-off and loves to be centre of attention. He randomly has his moments where he plays with his imaginary friend in the field and they are the only two galloping around seeing which one can leap the highest, spin the quickest etc etc. You shout at him for being so silly, he darts over and does a solo right in front of you then runs off again. Destiny (who was kicked and chipped a hind splint bone early Feb) is coming back into work, however in her frustration at not being allowed to live out at night she has kicked the stable wall enough to bruise her hind feet. Despite not eating well through boredom she has actually put on condition and I can’t wait to do more serious work with her. But no sooner is one back, another is out. 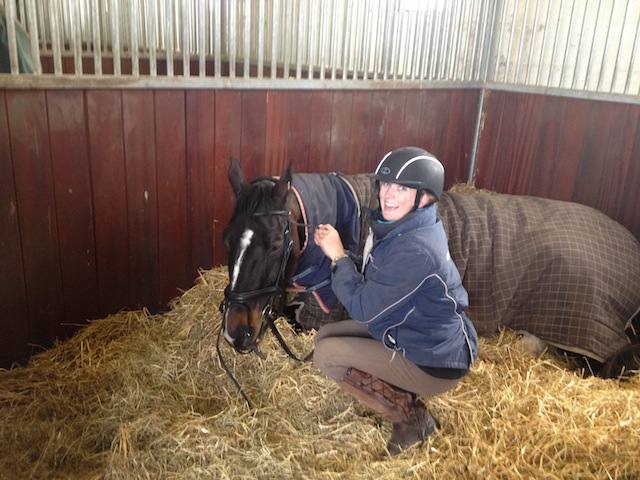 Zac – not much gets this horse out of bed!

The wonderful Zac (Carousel Chaos) suddenly went broken leg lame….but intermittently. After endless searches eventually he was anaesthetised and a camera was put into his shoulder where an old injured cartilage is thought to be the blame. This is so sad and everything crossed that maybe he will be able to compete again. Although he was a new ride, I felt something really special with this horse; he is such a talent and feels so safe despite his enormous size. He was very well brought up since the age of four by his tiny owner Sarah, and therefore a joy to be with and to train. 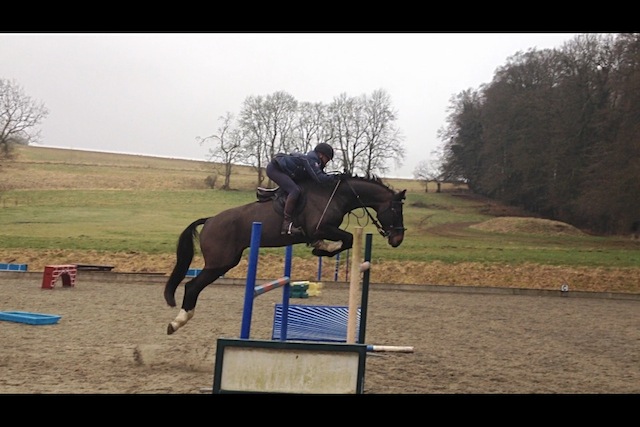 Getting to know Zac

A big aim when training is to help my horses develop brilliant footwork. I will always try to look after their balance and their speed but I want them to learn to listen to the ground and judge the unevenness for themselves. When hacking I tend to go anywhere but the path as long as it’s safe, over fallen branches, up and down banks on the verge, through ruts and ditches (mostly in walk). This all helps my horses to become aware and also helps strengthen our partnership as they learn to trust that what I ask is ok. The canter work is done in a huge field that has a bowl cut out in the side of the hill. I do my interval training here as it is all on old pasture land and the ground seems to stay rideable no matter what the weather. This field is incredible as I can choose the variation of steepness both up and down and the length of hills incorporated in the work out. Some parts are softer than others which helps them learn their balance on different types of ground, as they will have to at events. I do so love my horses, Daisy is meant to be our sell on project. Mum say’s I’ll never be able to sell her with the reputation I am giving her in print and with a big smile I reply ‘I know….’