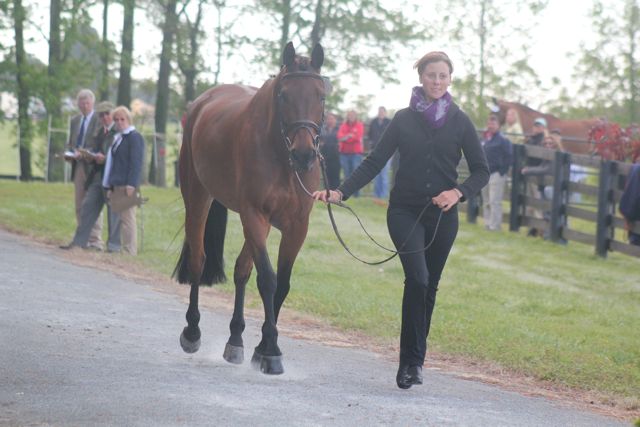 Rebecca Howard and Riddle Master at The Fork last year.

We haven’t heard from Rebecca Howard on EN since she wrote an excellent guest blog following the Olympics last year. While that post had a rather somber tone due to Canada’s disappointing results at the Games, I caught up with her on Skype yesterday to discuss a much happier subject: her sixth-place finish with Riddle Master at the Fontainebleau CIC3* last weekend. Rebecca stayed in England following the Olympics and is now riding with New Zealanders Tim Price and Jonelle Richards at Mere Farm in Wiltshire. While Rebecca loves living and training in this eventing mecca, England’s less-than-stellar weather put a damper on her training regime leading up to Fontainebleau.

“There was a little bit of improvising with my schedule due to all the bad weather we’ve been having over here,” Rebecca said. “I was really lucky because I had an early entry at Isleham Horse Trials, which is one of the first events that runs over here. The ground was really good at intermediate. Rupert was supposed to run again at Tweseldown. The intermediate did run there, but the ground was just really muddy. He also had a skin problem right where the saddle needed to go, so he ended up with a little time off and was down one run from what I had originally planned leading up to Fontainebleau.”

Kicking on in France

Rebecca and Rupert had a solid 12th place finish at Isleham in an intermediate division that reads like a Who’s Who of British eventing. Since she didn’t get in a cross-country run at Tweseldown like she had planned, Rebecca took Rupert to one final cross-country schooling before Fontainebleau to give him a chance to jump into water one more time. “I was less worried about him,” Rebecca said. “It was more than I wanted another run cross country for myself. I felt like I was a bit tentative around my first track at Isleham. I knew I needed to kick on at Fontainebleau for sure.”

Rupert settled in beautifully in his warmup for dressage at Fontainebleau, showing Rebecca that he’s becoming a horse who knows his job in all three phases. “This was one of the first times at an event in that type of environment that he felt the same in the ring as he did in warmup,” Rebecca said. “It’s quite cool; he’s really turning into a professional.” Rebecca and Rupert performed a beautiful, accurate dressage test to score 41, which put them in sixth place in an all-star field. “Rupert’s trot work has been quite strong over the past year and a half,” Rebecca said. “It’s where he gets the majority of his marks. The canter work has been weaker, and the changes have been a work in progress. This was my first test where I’ve had all of them clean, so that was great to nail the canter work for the first time. I was also really happy with his rideability and relaxation in the ring, which is something that continues to get better.”

The Fontainebleau cross-country course required good, positive riding, with lines that were forward and fairly direct. “You had to start off galloping; otherwise, you would be behind on the clock,” Rebecca said. “The time was quite hard to make — unless you’re Michael Jung; he’s a freak!” This was Rebecca’s first cross-country run with Rupert in a pelham, which she said helped a lot with his tendency to become tense through his neck. “He’s never been a strong horse, but he can be a bit rude,” Rebecca said. “I put him in a pelham and now he actually takes a little more of a hold and I have better communication with him. I felt like I was able to have a smooth ride, which is a good feeling.”

Rebecca and Rupert picked up 5.1 time penalties on cross country to move up one spot to fifth place. In show jumping, the two pulled a rail to finish Fontainbleau in sixth place. “The horse is a very good jumper and really tries his heart out,” Rebecca said. “The rail was totally my fault. It was a seven- or eight-stride line into the triple combination. I really wanted a seven, and I stayed too direct and got a bit too deep to the triple. He tried hard, but had the middle part down. From his standpoint, he really couldn’t have been better all weekend. He would have jumped a clean round had it not been for those little mistakes on my part.”

Rebecca’s success at Fontainebleau served as an excellent preparation for Badminton, where she and Rupert will compete for the first time. Rupert will have one more run at either Weston Park or Belton Park before tackling one of the most challenging cross-country courses in the world. “I’ve never been to Badminton; I’ve never even spectated it,” Rebecca said. “It’s certainly one of the pinnacle, historic events in the sport. Any rider would be chomping at the bit for a chance to compete. I certainly have a great horse to jump around my first Badminton. I certainly hope to be competitive and not just there to hang out. I’m just going to try to keep my eyes wide open and learn everything I can from everyone around me.”

With the excellent run at Fontainebleau under her belt, Rebecca feels like she can finally move past the Olympics. “The baggage from the Games lasted a bit longer than I even expected,” Rebecca said. “We went to Blenheim after London, and Rupert got it done, but it was not the best feeling. It’s been a winter of change and new places and really trying to learn new things and stretch my ability and knowledge. It’s been both exciting and frustrating. Some days you feel like everyone is so much better than you, and I’m back to trying to figure things out again in another country. Through the winter, you never really know where you are until you can go and put yourself against some of these top horses and riders. It was a big confidence boost, and I’m certainly going to use that going into Badminton.”