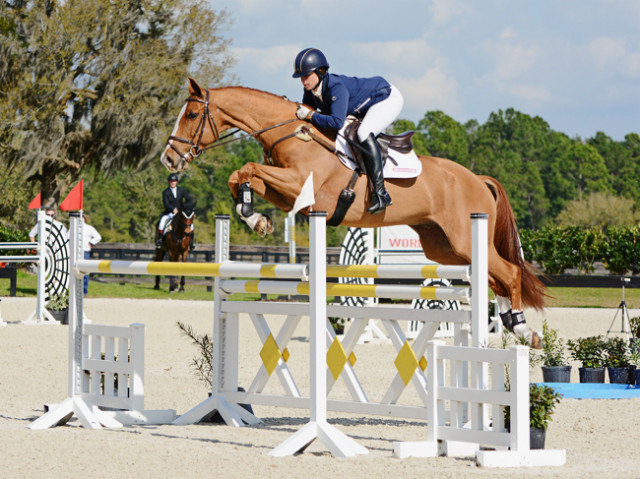 After completing Rolex twice, Lillian Heard is now setting her sights on her first trip overseas to contest her third CCI4* event with her 13-year-old Irish Sport Horse, Share Option. She feels the time has come to test their competitive skills across the pond, and she’s working hard to fine tune all of the tools she will need to compete against some of the best in the world.

“(Share Option) has done Kentucky twice now and he had a really successful spring,” Lillian said. “I’ve done Fair Hill plenty of times and I knew I wanted to go abroad with him. My options were to do a three-star or a four-star, but I didn’t think Burghley would suit him as well as Pau.”

In her decision making process, Lillian consulted with her coach, Boyd Martin, who advised her that Pau would be a great event for “Whitey.” The chestnut gelding is a good show jumper who thrives on technical and challenging courses, which can be found at Pau. His adjustability also makes him ideal for a technical cross country course, where Lillian can make changes to his stride without worrying about getting into an argument.

“It’s not that I don’t think he could do Burghley,” Lillian explained. “But I think that course suits a big, galloping horse who just eats up the course. Whitey is a very good jumper and, if anything, he’s a little too careful. He’s much more successful on a course that’s technical and not just big. I think he could be more competitive at a four-star like Pau.”

Knowing that she’s selected an event where she has a good chance of competing, Lillian has already set to work preparing for the trip. “I’d say the biggest thing I’m working on right now is his dressage,” she said. “It’s not that he isn’t good but because it’s so competitive now. You watch people go and you think, ‘Surely that isn’t an event horse, surely that’s a dressage horse.’ So I’m trying not to be satisfied with my horse just feeling good — I’ve got to bump it up about 10 notches before I go over there.”

Lillian plans to take Share Option to Plantation Field in the Advanced division and also has him entered at Morven Park, where she will likely do a combined test. Lillian will then take her other horses to Fair Hill while her groom, Savannah Kilpatrick, ships out to France with Whitey.

In preparation for the upcoming trip, Lillian is also planning to host a fundraising event on September 26 that will include an auction of donated items. Lillian is particularly excited about one item in particular: a lesson taught aboard Share Option himself.

“It will be a lesson after Pau, on Whitey, taught by me,” Lillian said. “Not many people would do that with their four-star horses, but some riders have joked that if they could just ride him one time they’d learn so much. I just think it would be a cool opportunity for one of the kids, or for anyone really. So that’s my big item right now!”

Lillian will also be enabling online fundraising as well, and more details for these efforts will be made available as they emerge. You can follow Lillian’s Facebook page and website for more information.

When asked what her experience at Kentucky has lent her in preparation for Pau, Lillian is quick to respond. “When you go to a four-star, the idea that it’s a four-star can scare you,” she said. “It’s easy to get caught up in it. But I always try to say, when you move from Prelim to Intermediate, you just look at it as the biggest Prelim you’ve ever done. The same goes for a four-star — it’s the biggest three-star you’ve ever done.”

“I know I can do it, and I know my horse can do it. I just need to show up and be prepared. My goal is to go out and eat up that course and leave it all out there. I’ll have the support of the others who are going as well, and I have to thank Joanie Morris for helping me set up the travel and organizing for me — she is the most amazing person.”

We wish Lillian and Share Option the best of luck as they prepare for their first trip overseas together, and we’ll be on the ground at Pau, which runs October 21-25, to follow their progress along with our other U.S. riders. Go Pau!