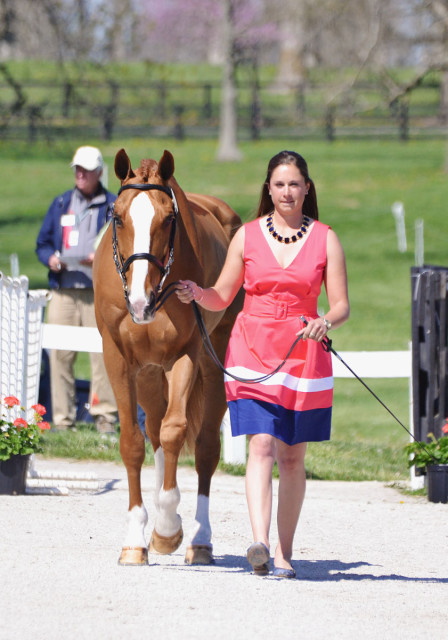 Lillian Heard announced last night on her Facebook page that Share Option will be unable to make the trip to France this fall to compete in Pau CCI4* due to a minor injury. After their successful four-star debut at Rolex this spring, where they finished in 31st place, Lillian and Whitey were awarded a Jacqueline B. Mars Competition and Training Grant to travel overseas to contest their second CCI4*.

“It’s with a heavy heart I announce Whitey has sustained a minor injury that will prevent him from making the trip to France for Pau. He should be back in action by next season so, in a way, I’m very lucky,” Lillian said on Facebook. “Thank you so much to Jacqueline Mars and the USEF for giving me the opportunity.

“Thank you to every person that has supported me these last couple months. As an event rider, I have to be prepared for major disappointments, and yet it is in times like these I am reminded how amazing all the people involved in our sport are.”

Lillian and Whitey competed at Plantation Field International Horse Trials in the Advanced division earlier this month, easily cruising to a second-place finish on a score of 50.5. We are very sorry to hear of Whitey’s injury, but pleased to hear that it is nothing major. We look forward to seeing him back in action in the spring and potentially contesting his second four-star at Rolex once again.

Two of the four USEF grant recipients for Pau are now out of the competition, as Doug Payne and Crown Talisman also received a grant prior to the horse being sold to Nick Gauntlett. Clark Montgomery and Loughan Glen also received a grant, and Sharon White also confirmed at Plantation Field that she will be competing Wundermaske at Pau.

Lauren Kieffer and Veronica originally received a grant for Burghley or Blenheim, in addition to being named alternates to the U.S. World Equestrian Games squad, but she confirmed this morning that they will now head to Pau after a minor injury kept the mare sidelined earlier this season.

“That’s the plan,” Lauren said this morning of her plan to re-route Veronica to Pau. “There are still a few weeks for something to go wrong. We could be viciously attacked by killer butterflies.” That IS always a huge risk leading up to these big four-star events. Fingers crossed all these horses and riders stay safe in these final weeks.

So Clark Montgomery, Lauren Kieffer and Sharon White will make up our U.S. Pau contingent. If you know of another rider planning to head to Pau, tip us at [email protected]. Entries for Pau close Oct. 6, so we’re anxiously awaiting to see who all is planning to go. Stay tuned to EN as we count down to the next four-star of the year.