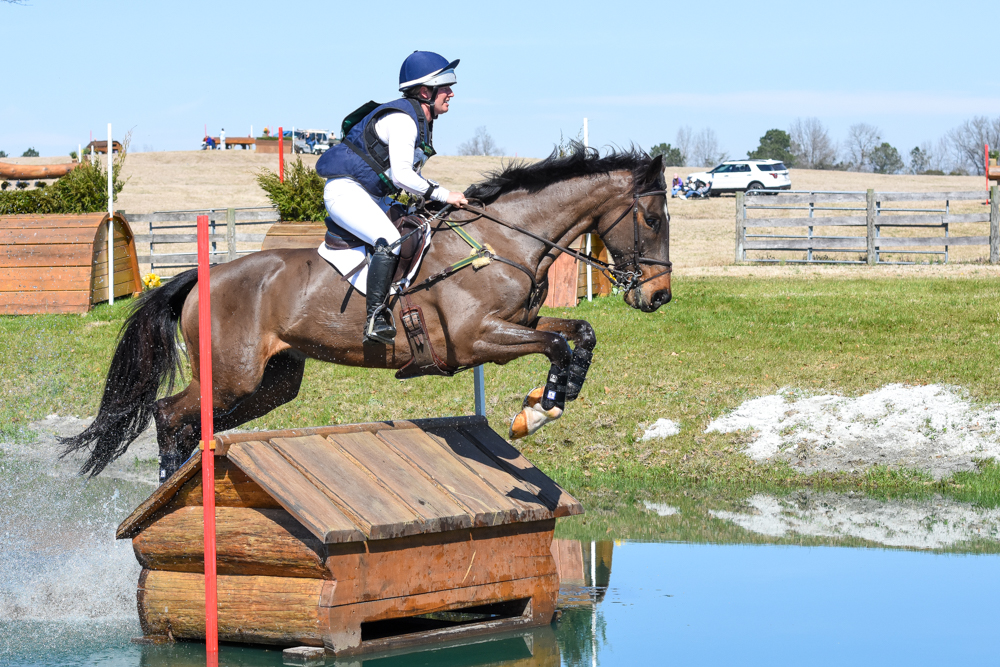 The first Advanced of the season is always a mélange that includes a mix of entries — from experienced campaigners to first timers. For many, the first blue numbers of the year set the tone for performances to come, and a good result is a boost of confidence any rider would want. The beneficiaries of that good fortune at Pine Top Advanced are Jenny Caras Roberts and Phillip Dutton.

Jenny Caras Roberts lead the 34-entry Advanced A division from start to finish with Elyse Eisenberg’s Trendy Fernhill. The Pine Top blue ribbon was familiar for Jenny and “Joey,” a 10-year-old Irish Sport Horse (Ars Vivendi x Cruising’s Girl, by Cruising). They picked up one just two weeks ago winning the Open Intermediate here. Today the combination had a 26.1 on the flat and added 8.4 time penalties on the cross country for a final result of 34.5.

“He did his first Advanced here last year, and this was just his fourth Advanced. I think it was the best round I’ve had on him. He was really brave and really confident. It felt pretty easy – I was just trying to have a good rhythm and not go too fast, so I was really, really happy with him,” Jenny said.

After moving up to the level in 2020, Jenny had her sights set high, but Joey’s diagnosis of Irritable Bowel Syndrome and a global pandemic set him on the sidelines for most of the year. Now with his diet sorted, this pair is guns blazing toward a CCI4*-L this spring. 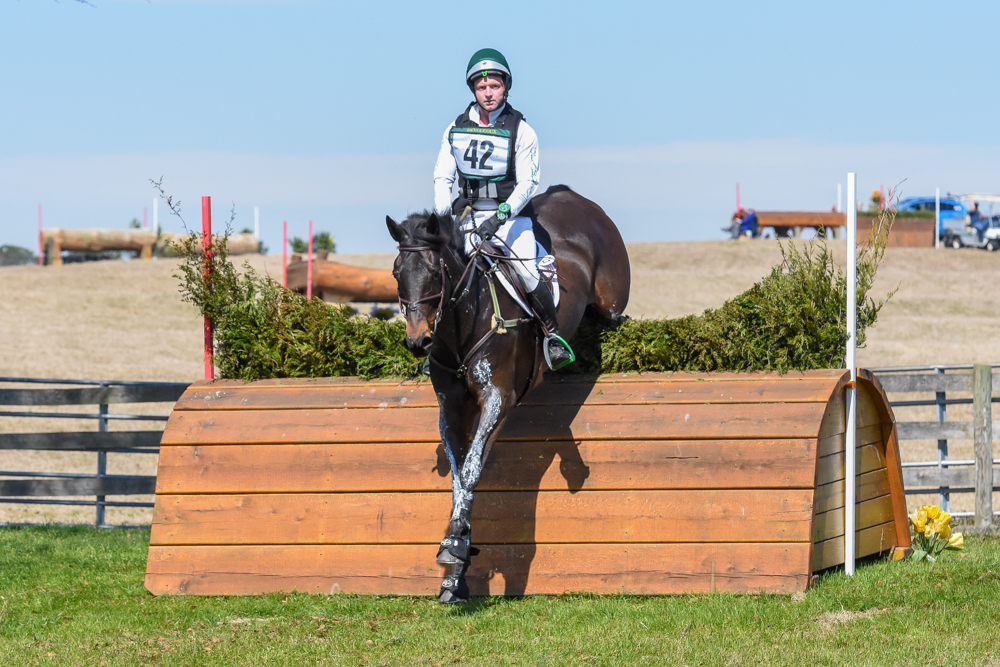 Tim Bourke and Carla Abramcheck’s Quality Time took second place. This was the first run of the year for the 10-year-old Irish Sport Horse (Guidam x Ruby Roller, by High Roller) who is back after recovering from an injury sustained at Tryon last November.

“At Tryon we finished the cross country double clear in the four-star long, and she had a little knick on her knee. It unfortunately had gone into the joint, so she went over to Tryon Equine Hospital and those people were incredible – they had her on the table that night and flushed the joint,” Tim said. “This is her first run back since, so she hasn’t done anything in a little while, but she’s just brilliant. She just rocks around, and you can just come out here after not running in months.”

This pair started the competition in 20th place, and they added only 8 cross country time penalties to finish on a score of 41.6. 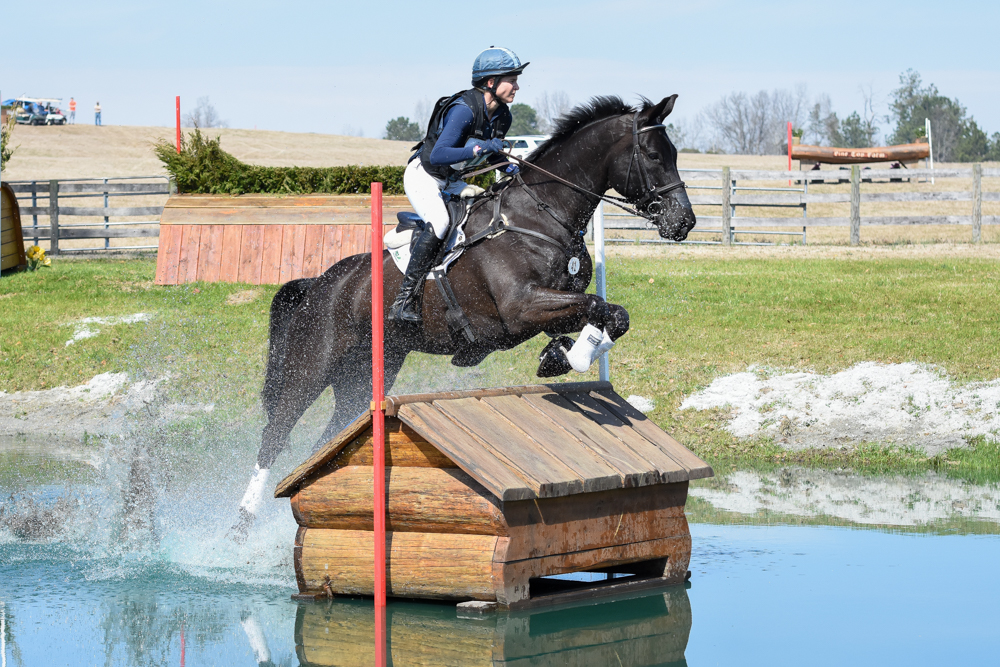 Valerie Vizcarrondo Pride and her own Favian, a 13-year-old Oldenburg (French Kiss x Risiko, by Relevant) were third. They were the fastest combination of the day, finishing in 6 minutes and 19 minutes for a final score of 41.7. 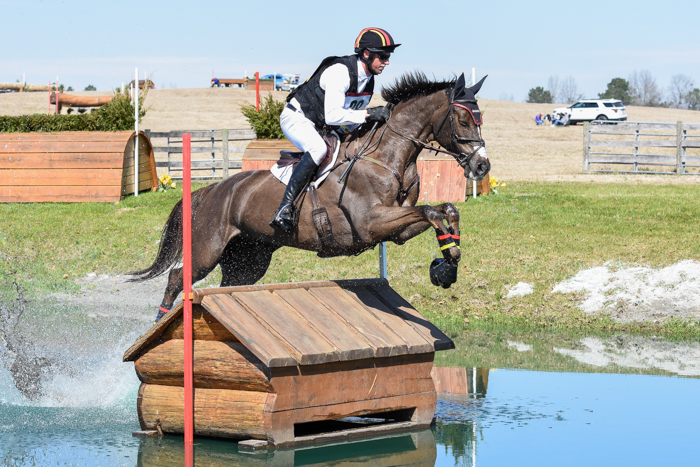 The Pan American partnership of Doug Payne and Starr Witness, a 10-year-old Dutch mare (Chello II x Carmen, by Veneur) owned by Laurie McCree, Doug and Catherine Winter, shared a tied lead for first place until the cross country phase where a nice and easy trip in 16 time penalties moved them into fourth place (42.1). 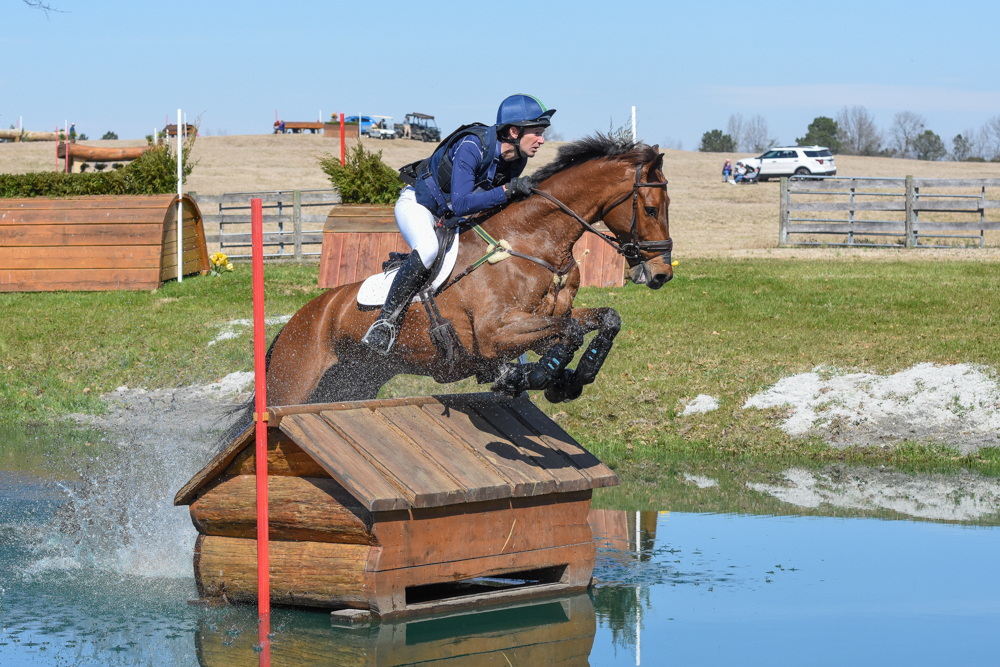 Colleen Loach and Vermont finished sixth. Colleen stepped Peter Barry’s 9-year-old Hanoverian up to the level last fall, and this weekend the combination added an educational 17.2 time penalties to their dressage score of 27.9 for a final result of 45.1. Colleen was also 8th with longtime partner Qorry Blue D’Argouges.

Jon Holling was ninth with Advanced first-timer Prophet, an 8-year-old Trakehner owned by Jon and Chuck McGrath, finishing on a score of 51. Rounding out 10th place is Amanda Beale Clement and Carlson 119 on a score of 51.6. 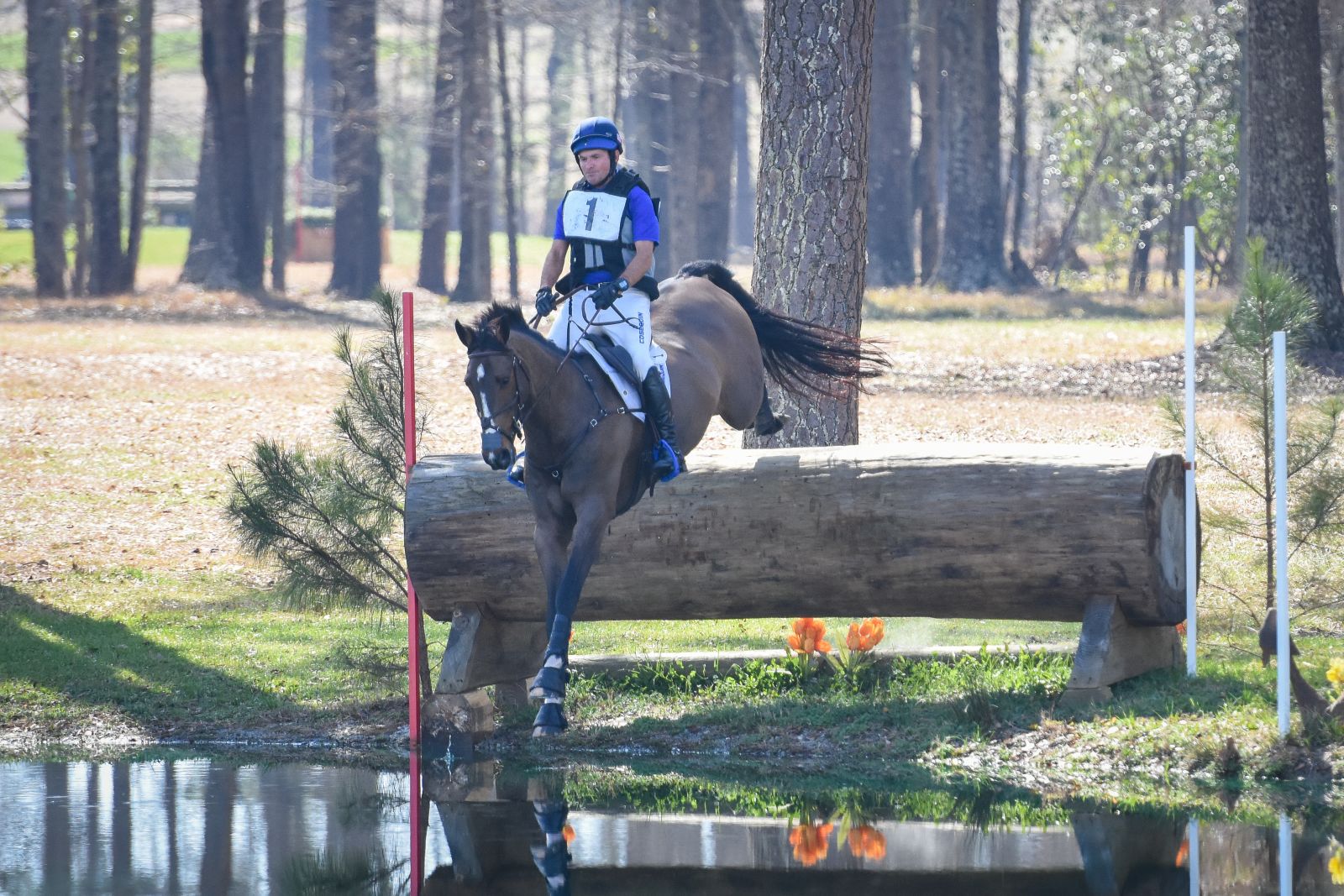 Eventing magician Phillip Dutton pulled another trick out of his hat Friday, earning a 15 on the flat to set a new Advanced record. He did this with Caroline Moran’s Carlchen, an experienced campaigner in his own right. The 13-year-old Oldenburg (Clinton x Sunshine, by Lordanos) came stateside in 2019, but this is his first presentation at the level with Phillip.

Their record-breaking dressage gave plenty of breathing room for a breezy 18 time penalties on an otherwise clear cross country to finish on 34.2. Take a look at their mic drop dressage:

“I’ve been in Wellington, so I haven’t actually gone cross country much. I wasn’t sure how he’d be, but he did very well.He’s a real quality horse. He’s so athletic, and this was a great course to be able to just ride at. It’s big enough and it’s just an ideal run,” Phillip said. 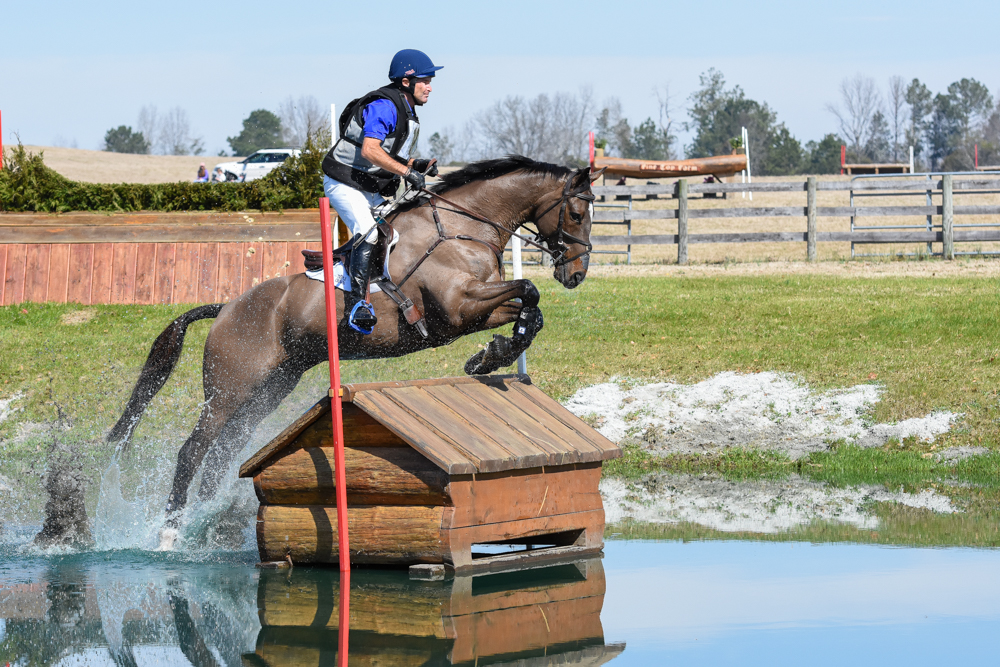 Phillip Dutton and Sea of Clouds. Photo by Shelby Allen.

Phillip was also second with Sea of Clouds, a 10-year-old Thoroughbred owned by the Sea of Clouds Partnership on a score of 34.8. “He’s just come leaps and bounds in the last six months,” Phillip said. “I’m really excited about him actually – he’s a proper five-star horse if the other phases get competitive because him being a Thoroughbred he’s able to go fast and quick.”

Phillip’s other Advanced entries, Z and Fernhill Singapore, completed only the dressage and will have a run next week at Grand-Prix Eventing at Bruce’s Field. 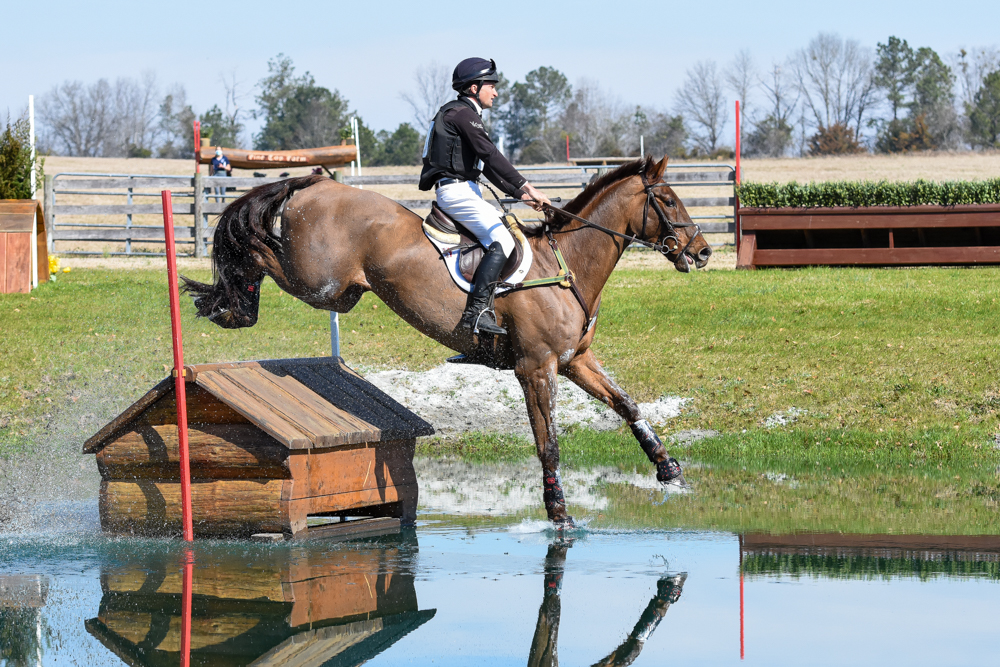 Waylon Roberts and Michelle and John Koppin’s Lancaster, a 14-year-old Canadian Sport Horse gelding by Yavari, were third on a score of 36.6.

As usual, Derek di Grazia’s course elicited bold, forward riding. No combinations caught the time, but 88% of the field finished with no jumping penalties.

Pine Top also had a beefy intermediate lineup. Join us in congratulating these winners: