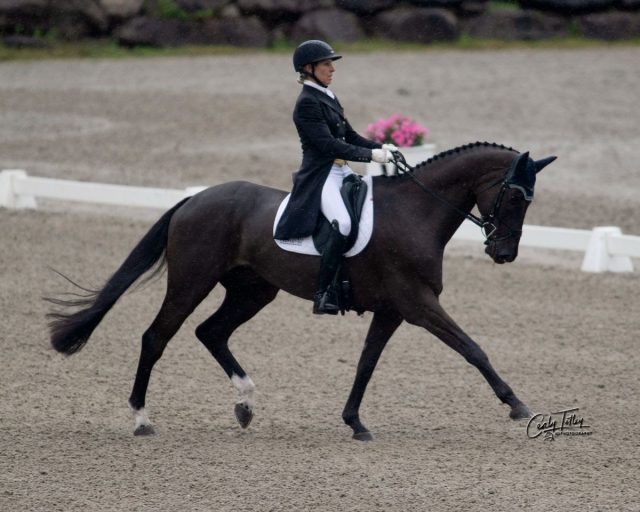 Riding before the judging panel of Marilyn Payne (USA) at C, Peter Gray (CAN) at E and Sue Baxter (GBR) at M, Liz and The Monster Partnership’s Cooley Moonshine earned a 25.8 to take a healthy lead over early leaders Phillip Dutton and Caroline Moran’s Quasi Cool (31.1).

“I am really thrilled with the horses,” Liz commented. “Cooley Moonshine did one of the best tests he has done which is fantastic. He is a horse I think the world of. He went in and got sort of equal scores from the judges which is great — that is what you are looking for.” Indeed he did; the 10-year-old Irish Sport Horse gelding by Cobra earned strikingly similar scores across the board: 74.38 at M, 73.54 at C, and a 74.58 at E.

Nine of the 4*-L competitors rode their tests today, with eight more pairs to come tomorrow morning. Sitting third overnight behind Phillip Dutton will be Canadian Olympian Jessica Phoenix with Saskia Goedhart’s Mighty Mouse, a 13-year-old gelding by Contenda making his 4*-L debut this weekend and earning a score of 32.0 to start things off. 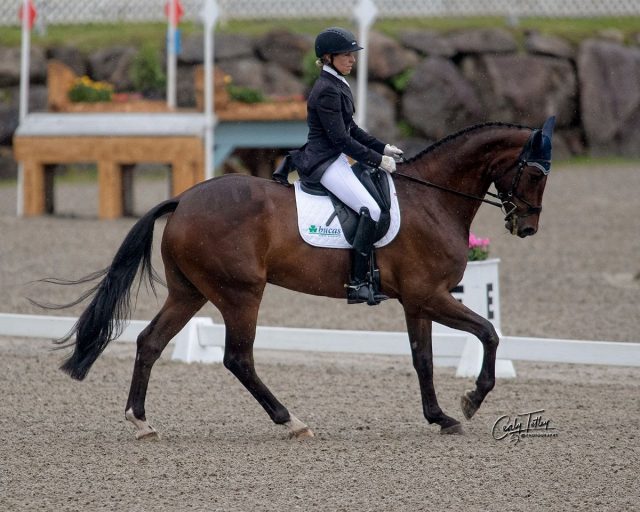 Liz Halliday-Sharp will also take the dressage lead in the CCI3*-L, scoring a 28.1 with Ocala Horse Properties’ Shanroe Cooley, a seven-year-old Irish gelding by Dallas making his Long debut at this level. Liz will also be third overnight with The Calmaria Partnership’s Cooley HHS Calmaria, who scored a 29.3 to keep the scores tightly bunched up top. It’s a big, open track designed by Derek di Grazia (assisted by Jay Hambly this weekend) — one that should suit Liz’s big, bold jumpers and give them a chance to stretch out and really test their fitness.

Of course, a decent amount of rain the area has seen this week means the ground’s a bit wet now, and more rain is currently forecasted for Friday. But Saturday’s forecast looks drier, and we could see perfect footing if it has a chance to absorb and dry in the coming day.

“My biggest thoughts are that it is unusually wet,” Liz commented about the track. “I think it is a good track — strong enough but fair, big and bold like you would expect.”

Sandwiched between the two Halliday-Sharp rides in the 3*-L is Boyd Martin, who will be second overnight with longtime owner Bonnie Stedt’s Miss Lulu Herself. This nine-year-old Hanoverian mare is a product of Boyd’s own breeding program, sired by Stolzenfels and out of Noisette. This is the first 3*-L for Miss Lulu Herself, and she earned a 28.3 to mark a competitive debut on day one. 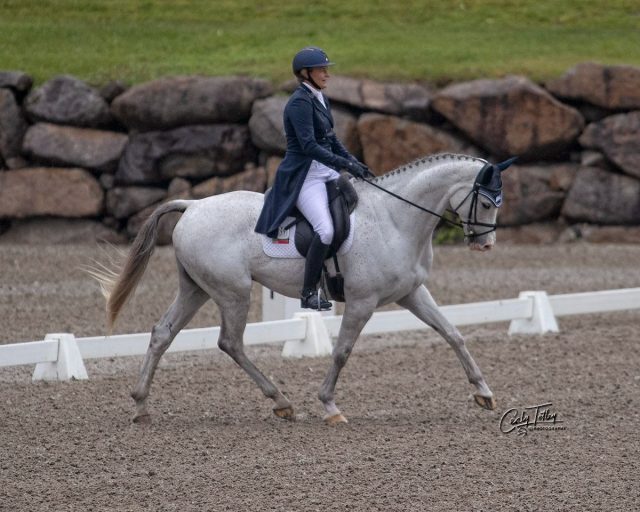 Sara Kozumplik and Otta B Quality. Photo by Cealy Tetley.

Looking to the two CCI2*-L divisions this weekend, it will be Sara Kozumplik aboard her own Otta B Quality, an 11-year-old Dutch Warmblood gelding competing in his second 2*-L; he was third at his last go in the Long format at Tryon in 2020.

Sara remarked on social media that she felt she could have produced a better score, noting that she felt she hadn’t gotten “Otter’s” canter loose enough to earn some better marks. Luckily, there’s still much to do and much opportunity to make good on those scores, and she’ll be looking to give both her up-and-coming partners confidence-boosting, competitive rides come Saturday.

20-year-old Ayden Schain is the dressage winner in the U25 CCI2*-L, scoring a 26.3 with Dawn Barclay’s Fernhill Hole Shot to slot into the lead ahead of second-placed Cassie Sanger and Fernhill Zoro (27.8). Cassie is also well-placed in third with her second 2*-L ride, Redfield Fyre (29.4). Less than 20 penalty points separate the 16-strong U25 field, which should make for an exciting cross country competition on Saturday. 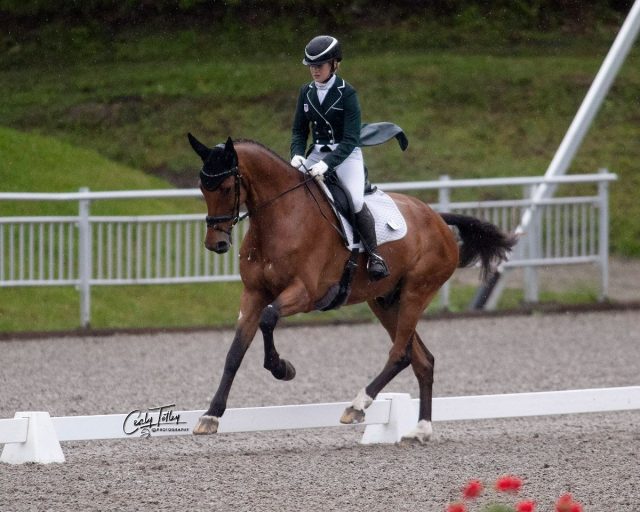 Dressage resumes tomorrow morning at 9 a.m. EST with the conclusion of the 4*-L the 2*-L as well as the dressage competition for the 4*-S also running this weekend. There is no live stream from Bromont, but Abby Powell arrives tomorrow, Chinch in hand, and will have more content coming your way soon.

In the meantime, take a look at some more sights and sounds from Bromont and we’ll be back tomorrow with much more. Go Eventing.