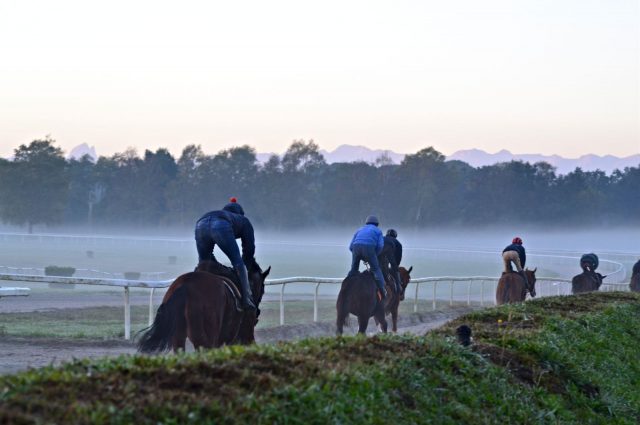 More than 150 racing stables have been placed on lockdown after a bout of equine influenza hit a yard in Cheshire, in the north-west of England. Three horses tested positive for the virus at Donald McCain‘s base on Wednesday, 6th February; because several of their stablemates had contested races at Ayr, Ludlow, and Wolverhampton racecourses earlier in the week, the British Horseracing Authority (BHA) opted to cancel all race meetings on Thursday 7th in order to contain the spread. Since then, three further horses at McCain’s yard have tested positive, as have horses in Somerset and Suffolk. Each of the cases has been confirmed as Florida clade 1 virus, an uncommon strain last seen in the UK in 2009. FC1 is most commonly found in North America, and the source of the outbreak, which began in isolated cases at the tail end of 2018, is unknown.

The initial one-day cancellation of race meetings was extended to Wednesday the 13th at the earliest as racing yards have gone into pseudo-quarantine to monitor their equine residents and test for the virus. This represents the biggest shutdown to the sport since 2001’s foot-and-mouth outbreak.

Since Wednesday, approximately 2,000 nasal swab samples have been sent to the Animal Health Trust for testing. The results of these tests will begin to come through on Monday the 11th, giving the BHA a better idea of the scope of the outbreak and how best to tackle it.

So what does this mean for eventing, with the start of the season just three weeks away? Currently, not much. With a handful of exceptions, schooling facilities and training shows remain open, following the advice put forth by the British Equestrian Federation (BEF). Many of these venues have released statements of their own, requiring horses to have been vaccinated within the last six months, and confirming that passport spot-checks will be carried out on-site.

Equine influenza, while not normally fatal, is a highly contagious airborne virus, which affects the upper respiratory tract and can be harmful to the very young, old, or infirm, and particularly foals, in whom it can lead to pneumonia. While racehorses and competition horses are vaccinated annually, the flu virus is antigenic, meaning that it mutates constantly, which can effectively safeguard it against the vaccine. Although vigilant vaccination has been proven to minimise the risk of influenza – or diminish the symptoms in an affected horse – the vaccine’s efficacy has also been impacted by the large number of unvaccinated horses in Great Britain: only 40% of British horses are up-to-date with their flu jab. A study by the AHT has found that if just 70% of Britain’s horses were vaccinated, every horse would be safe from a flu outbreak.

This horse is using the nebuliser which is like a human inhaler for asthma sufferers. They inhale a mixture of medication & water which aids healthy lungs and airways. Most yards do this to fight bacteria &virus in the atmosphere #equine flu. @RacingTV @SkySportsRacing @itvracing pic.twitter.com/CUs3woR7b2

The BEF have advised horse owners and yard managers to exercise vigilance against the flu outbreak. This starts with making sure your horse is adequately protected: if its flu vaccination is more than six months old, you should consider scheduling a booster jab, which will contain the latest strain of the virus. It’s recommended – and in some cases, required – to give your horse a seven-day clearing period after a jab before heading out to a competition, although British Eventing permits you to compete the next day. You should also be on the lookout for symptoms of the flu, and if your horse or another in the same yard begins to show any, isolate the horse, contact your vet immediately and cease all movement of horses in and out of the yard.

Symptoms of equine influenza include:

Clinical signs of the flu normally appear within one to three days after exposure to the virus, and usually last a week or so. Any longer indicates a more serious secondary bacterial infection. Generally, the virus is transmitted by airborne droplets, released when an infected horse coughs. In many ways, equine influenza is much like human flu – but it can travel much further, and an infected horse needs to be isolated at a distance of at least 100m/328ft from other horses. The virus itself can’t be treated with antibiotics; instead, rest, appropriate feed, adequate hydration, and a clean environment are necessary to help the horse recover. It’s absolutely necessary to involve your vet if you think your horse might have the flu, though – they’ll be able to diagnose any secondary infections or complications and advise appropriate action as needed.

If you travel between yards – for example, if you’re a freelance groom or trainer – it’s sensible to adopt some basic biosecurity practices. Use the yard’s own equipment rather than bringing your own from job to job, change your outer layer of clothing between yards, and use disinfectants to ensure your hands and boots are free of contaminants.

The BHA’s efficient and comprehensive lockdown means that it’s unlikely we’ll see a true influenza crisis, but stay vigilant, make sure your horse is up-to-date on vaccinations, and if in doubt, raincheck on any outings scheduled for the next few days.

The Animal Health Trust offers free nasopharyngeal swab and blood tests as part of its equine influenza surveillance board, sponsored by the Horserace Betting Levy Board. To make use of the scheme, contact your vet – they’ll need to be registered with the scheme, which they can do online at equiflunet.org.uk. For up-to-the-minute updates on further outbreaks, follow @equiflunet on Twitter.