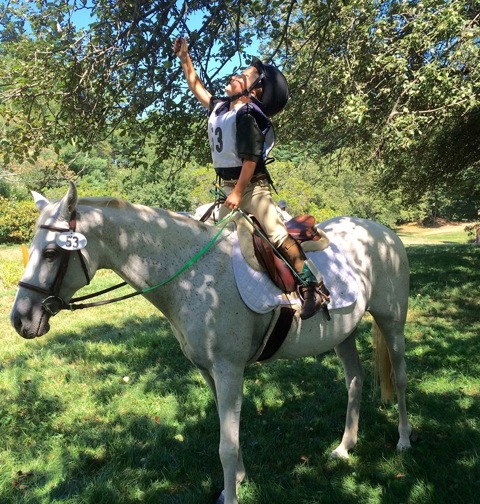 Taylor Smith on 'Sugar' pause from competition for some apple picking.

While some of the best American eventers congregated in Texas this past weekend for the Nutrena American Eventing Championships, some of Area 1’s future stars took the spotlight about a month ago at the inaugural Schooling Horse Trials Championship (SHTC).

The SHTC came to fruition this year on August 30th at Apple Knoll Farm in Millis, Massachusetts after being no more than an idea among local barn owners for the past few years. Adrienne Iorio the owner and head trainer of Apple Knoll Farm was one of those area barn owners. “The SHTC is a way to showcase and celebrate our riders starting out in the sport of eventing. It gives the lower levels an attainable goal,” she said.

David Wilson, the owner of Flying High Stables in South Hamilton, Massachusetts, got wind of the idea, loved it, and encouraged the local barn owners to move forward with it. While Adrienne offered to host the Championship at her facility, David volunteered to organize it.

For David, the purpose of establishing the SHTC was multifaceted. “We wanted to give our lower-level riders a goal to aim for without feeling the need to move up,” he explained. “We wanted to give some additional motivation for students to do more schooling shows and we wanted to give the qualified riders a feeling of what it’s like to do recognized eventing and to experience the electricity of a bigger show environment.”

Another motivational factor in bringing the SHTC to life was establishing some standardization to the schooling levels. “Everyone knows that Novice is a walk/trot/canter dressage test and 2’11” jumping efforts, ” David explained. “but Elementary is 2′ in some places, 2’3″ in others, cross-rails in some, and the dressage test may or may not require canter.”

The inconsistency in division names can be confusing to prospective competitors who aren’t sure where to start. “Part of this process was to provide organizers and competitors with an apples to apples comparison,” David said.

While show organizers can take advantage of the revised level categorization, there is no need for them to change the names of the levels for the events at their facilities: David is taking care of that for now too. After each qualifying event took place, David filtered through the results and tracked earned points, assigning them to the proper person and taking into account the specifications of the level they were competing in for that show.

Creating a Championship takes some extra organization beyond what putting on a standard horse trial requires. “For me the most work was in keeping track of the results from the qualifying shows,” David said. 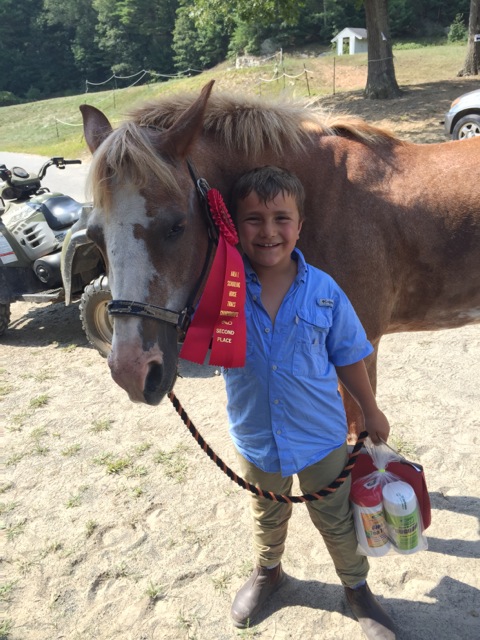 Initially deciding on what the qualifications was tricky as well; David had to adjust the point system midway through the summer in order to make qualifying a little more attainable. “We inadvertently made it too hard to qualify. The original thinking was, we didn’t want to make it so easy that you could qualify on just one show, but we made it too difficult,” David admits. Adrienne adds, “I want to have it count for just completing so persistence pays off.”

In addition to the point system that was devised, four hours of volunteer work were also required otherwise the entrants paid a higher entry fee. “Requiring volunteer hours was an effort to impress upon lower level riders that these shows can’t be run without a volunteer crew. They are a huge challenge to run and volunteers are a critical element,” David explained, “We had a ‘didn’t do it fee’ because we recognize that there are families that just can’t get to a show as volunteers — this was more of a way to provide extra motivation to those who can do it, but need the extra push to do it.”

Adrienne, an experienced 4-star level rider herself, knows first-hand how difficult it is to run a horse trial. “Finding the volunteers to run a horse trial is always the most challenging part. Everyone wants to come and ride.” In fact, several years ago Adrienne stopped hosting horse trials at Apple Knoll, due in large part to the scarcity of volunteers.

This year Apple Knoll Farm managed to host four total horse trials — three qualifiers plus the Championship. Adrienne was able to design Apple Knoll’s events so that they only needed 12 volunteers for the qualifiers and 15 for the championships.

However, they were still short-handed on volunteers for two out of the four events. If there is one thing that Adrienne want to impress upon her young eventers it’s, “Be sure to thank your volunteers and your sponsors. You could not do what you do without them.”

The day of the Championship, 63 horse and rider pairs turned out to the event. Both Adrienne and David agree that the show went off without a hitch, though they’re looking forward to growing the event even more next year. “I expect it to be significantly bigger next season. I have received requests from shows as far away as eastern New York and western Connecticut to participate as qualifiers. I’m very excited for next season,” David said.

Another challenge this year was getting the word out. “I suspect we had a large number of qualified riders who didn’t even know there is a Championship,” said David. Next year’s Championship has already been scheduled for August 28th, again at Apple Knoll Farm.

Getting riders excited about eventing is key to the survival of this sport. Having an attainable goal such as the SHTC for riders just starting out can create the kind of excitement needed to help ensure the future of the sport.

Adrienne has three sons, ages 4, 5, and 7 years old; all of whom participated in the Championship and put in their volunteer hours. “It was fun watching them track points and get excited for the Championships,” Adrienne said, “Charlie (7) ended up second in his division and was very proud. He brought his T-shirt and ribbon in to show his class on the first day of school.”

Low-level options can drive interest in the sport and engage new members by giving them a goal to aim for, allowing them to learn and grow, and eventually go on to compete at USEA recognized levels. It makes it more do-able to those just starting out. If we can grow the number of equestrians and potential equestrians interested in eventing, then the future of the sport starts to look a little brighter.

“I firmly believe that the SHTC is an event whose time has come,” David said, “It’s something that is really exciting for a large number of riders and coaches and I believe there is a strong demand for this kind of recognition after a season of hard work.”