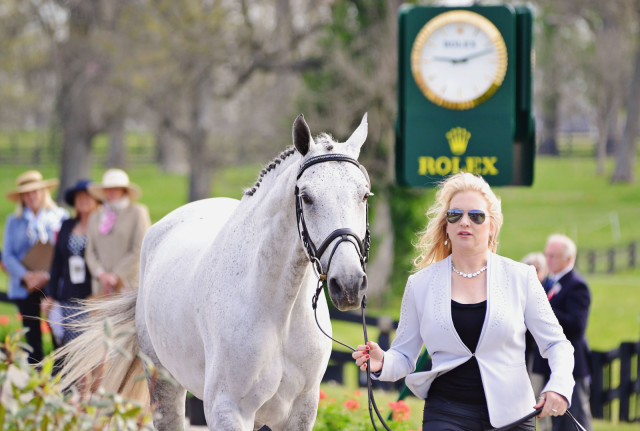 Marilyn Little and RF Smoke on the Water at Rolex. Photo by Jenni Autry.

The universe must have missed that 2014 was meant to be the Year of the Horse. It seems cruel to call it that now based on the heartbreak American eventing has seen in these past few months. We’ve lost Lionheart, Conair and now RF Smoke on the Water: three horses oozing with potential to become team horses — if not this year, then surely in the future — only to have their time on this earth cut short by tragic circumstances.

In Lionheart’s case, we never even saw what he and Allison Springer could accomplish. With two top-five placings at four-stars and an Olympic silver medal to his name as William Fox-Pitt’s mount, it was clear Lion and Allison would be a force to be reckoned with, which made it so much more devastating when he was euthanized following colic surgery complications on Jan. 18, not even two months after arriving in the States.

Conair came to Will Coleman’s barn already an accomplished competitor, having placed second in the Blenheim Palace CCI3* with Rodney Powell in the irons in 2012. After quickly forming a partnership, Will and Joey were third in the Dutta Corp Fair Hill International CCI3* last fall and looked perfectly primed to have a good go at the horse’s first Rolex. But the horse passed away from internal hemorrhaging after colliding with a cross-country jump in his final prep run at The Fork on April 6.

RF Smoke on the Water’s passing last week is not any easier to stomach nor understand. Thousands of Rolex spectators marveled at the horse as he romped around cross country clear and jumped a brilliant show jumping round to finish fifth with Marilyn Little in his first four-star attempt. Watching footage of him in NBC’s Rolex broadcast yesterday raised the inevitable question: How could a horse come through something as grueling as Rolex only to sustain fatal injuries while being cast in his stall?

We always ask why, but there are never easy answers. While these horses appear invincible when galloping across the country and soaring over mammoth jumps, they are so, so fragile when it comes down to it. But knowing that doesn’t make it any easier to say goodbye, or accept the inevitable when an injury or sheer bad luck rears its ugly head. There are still others we’ve lost this year: Kristi Nunnink’s Astro to EPM and Buck Davidson’s Santa’s Keeper to muscle ruptures — two more horses with such promise for the future.

And what about R-Star? One of the most talented mares in the country coming off a win in the Galway Downs CIC3* and ready to defend her top-10 finish at Rolex, Kristi had to retire her just days before the event due to an irregular heartbeat that had become too serious to risk competing her any longer. Then there’s Mr. Medicott, a shoo-in for Normandy, who’s now sidelined after aggravating an old tendon injury at Rolex. The list goes on and on.

Where does that leave us? Team USA has a wealth of depth this year for the selectors to choose from come late June when the long list is released and the end of July when those lucky few are named to the WEG team. These deaths, injuries and retirements by no means doom us to a poor performance in Normandy, but they’ll make it a little more painful to think about what might have been had the Year of the Horse been kinder to us.