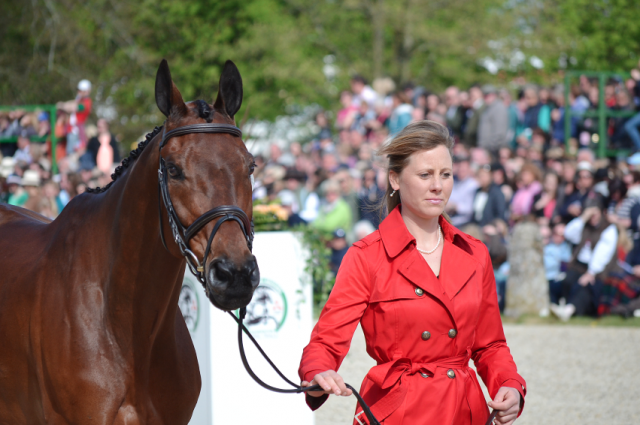 Jacky Green caught up with Canadian superstar Rebecca Howard after one of her final flat schools with British 5* dressage judge Isobel Wessels to talk about her final preparations for Badminton with Riddle Master, and she was kind enough to share the video with us. Rebecca and Rupert finished 12th at Badminton last year and 11th at Burghley at the fall, which means she came into this season with high hopes for good finishes as she looks to make the Canadian World Equestrian Games team.

“Last year, in terms of his success in competition, it was quite a smooth preparation (for Badminton),” Rebecca said. “Everything we set out to do, we did. Ultimately, last year we had some good results coming up to Badminton, but I was also a little bit surprised by that. So this year, it’s different. You head into the year with higher expectations, and we didn’t quite achieve those on a scoreboard sense. But having said that, the horse is a much better horse this year. He’s feeling good. So in that department, we’re feeling very prepared.”

She’s referring to the fact that they’ve had a rail in their last three outings leading up to Badminton, and the 54.5 dressage score in the CIC3* at Belton Park was not their best work. But Rebecca is a fierce competitor who specializes in rising to the occasion when it really counts, as we saw last season at Badminton and Burghley, and she is on track for a very good performance this week. I’ll be catching up with Rebecca and all our other North American pairs once I arrive on the grounds tomorrow, so stay tuned for much more from Badminton.