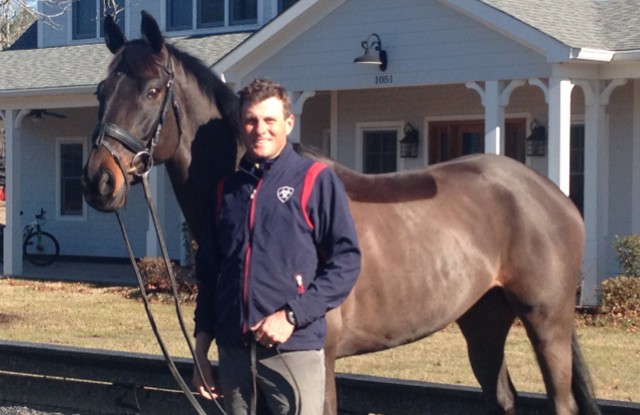 Ludwig Svennerstal posted a farewell blog message to Shamwari, who arrived in Aiken over the weekend to join new rider Boyd Martin’s upper-level string. We don’t always get an insider’s look at why top horses like this are sold out of Europe; but in Shamwari’s case, it seems like that was the plan all along, and Ludwig will now invest in the next generation of eventers to produce to the upper levels.

Boyd’s timing in closing the Shamwari deal couldn’t have been any better, with the big spring events kicking off soon and the selectors settling in for their duties in a championship year. Back in November when the High Performance Winter/Spring Training Lists were released and Boyd’s name was nowhere to be found, it became clear he needed to shore up his upper-level string — and fast.

He’s certainly done that with a horse that’s just 11 years old and coming into the prime of his career. With one Olympics and a European Championships under his belt, Shamwari will definitely be a horse to watch this spring. Boyd clarified on the COTH forums last week that he’s already qualified to run Rolex with the horse due to his FEI categorization, so it’s a safe bet we’ll be seeing this pair romp around Rolex.

Shamwari has now left my yard to join top international rider Boyd Martin in the U.S. It was a very difficult and emotional decision to sell Shamwari, as he is a horse that made many of my dreams come true. I was very happy when Boyd showed an interest for him, as I really respect him as a rider and a person, and I’m sure he will take great care of Shamwari.

With Shamwari, I won a Team Silver at the European Championships in Sweden last summer as well as a fourth Team and 20th individual placing at the Olympic Games in London 2012. Together, we got several placings in *** around Europe, among them my first placing in *** in Burnham Market 2011, where we finished second.

I am selling Shamwari as my father have been investing in a lot of great horses of which I had the pleasure to produce to *** or ****. The idea was and always is to produce these horses and sell them at a good age when they have reached top level. We are now looking to invest in the next generation of horses to produce.

Thanks, Shamwari, for all the awesome moments, and you will truly be missed!