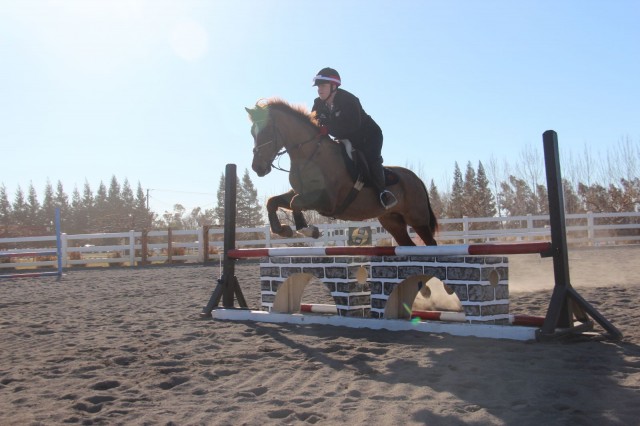 The lens-flare makes it look like I know what I'm doing.

As a horse-person I always get a kick out of Mondays on Facebook.  All of my non-horsey friends post things like “Oh no, it’s Monday again! Boo!” or “I could use one more weekend day!” while my horsey friends post things like “Such a fun but exhausting weekend, actually kind of glad to be back at work!” After two days with Hawley Bennett at Dragonfire, I’m certainly feeling the exhausted-and-happy-to-be-back-at-the-office sentiment.  I’m sure the excitement of being back at work will wear off by lunchtime. Photos and a clinic-report later this week.  Stay-tuned!

Your First Set of Weekend Results for 2014:

We may have seen some serious world domination by Andrew Nicholson lately but Ollie Townend insists he’s on his way back to the top.  After a year plagued with injuries to his horses and himself, Ollie says he’s feeling recharged and ready to come out swinging with big plans in 2014.  [More from Yorkshire Post]

You know the old saying, ‘No Hoof, No Horse’.  Farrier Andrew Reader-Smith did an interview recently and spoke of the trials and tribulations inherent in swinging a hammer as well as his competitive goals this season.  Reader-Smith is one of the top farriers in the UK and just happens to be the farrier that William Fox-Pitt uses. [More from Stuff.co.nz]

I’m a giant dork and spend far too much time playing video games.  I get a kick out of most horse related video games because they’re usually very silly.  Turns out Zara Phillips will be lending her name to the online game Howrse.  Prior to stumbling on this article I hadn’t played Howrse, but after “creating an account just to check it out”, I found myself staying awake late in to the night, clicking away. [More from Hello Magazine]

When Zara Phillips isn’t helping out with Howrse, she’s off to the races.  She was spotted recently at the Heythrop Hunt Point-to-Point races cheering on some of her own racers. [More from MyDaily.co.uk]

George Morris was famously quoted as saying “You either go to the hospital or you get back on! Hospital or on!” but USEF officials are suggesting it may be time to re-think that philosophy.  Malcolm Hook, Safety Committee Chairman of the USEF has said he’d like to start working on a rule to evaluate juniors who fall off before they are cleared to resume showing.  This would come in to effect in the 2015 season. [More from NJ.com]

Things are looking awesome for Mike Tice.  Tice was recently named the Falcons’ offensive line coach and the colt he owns a share in just won the Sham Stakes at Santa Anita Park.  The colt’s name is Midnight Hawk and has now earned 10 points towards qualifying for the 2014 Kentucky Derby.  Midnight Hawk is trained by Bob Baffert.  [More from NBCSports.com]

Monday Video: Someone needs to make me a pair of wings like this only instead of feathered wings, they should be bat wings.  That would be epic.