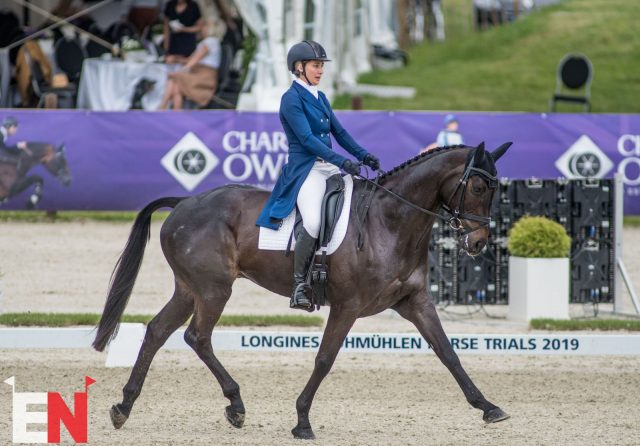 If Frankie Thieriot Stutes was German – or just a bit odd – she might have been heard to say “Ich glaud mein Schwein pfeift.” That’s because the Germans love a porcine aphorism, and why would anyone utter a mundanity like ‘I think I must be dreaming’ when one could say ‘I think my pig whistles’ instead?

But Frankie’s pig may well have been whistling as she rode into the main arena at Luhmühlen today. And if it was whistling then, it was almost certainly singing arias by the time she rode back out of it.

That’s because Frankie, who is, perhaps, the ultimate multi-hyphenate – amateur rider, business owner, and mum – has waited a long time for this moment.

“I went in the ring and just took a minute,” she says, her eyes brimming with tears. “From having two horses get hurt just before I was meant to take them to Kentucky, from wanting to do a five-star for like, fifteen years, and coming so, so close … two weeks before both of those times! Just getting to do the first phase, I thought, ‘Frankie, just have a minute. Soak this in, because it’s pretty special.’ There’s no horse in the world I’d rather be sitting on as we do it – no matter what happens the rest of the week, I’m so glad to be Chatwin’s partner. I’m just really thankful for him, and our partnership, and the fact that he trusts me so much – no matter what we do in the next two phases, nothing will ever shake the huge amount of admiration I have for this horse.” 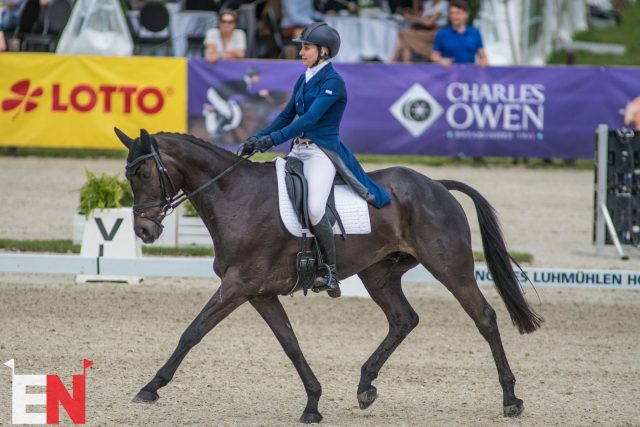 Cool and calm under pressure, Frankie and Chatwin danced their way through the test, just making one mistake in the first flying change but nonetheless putting a score of 28.2 on the board, slotting them three penalty points behind second-placed Tim Price and Ascona M.

“I think we can do a little better than that, but he went in there and did everything I asked of him,” says Frankie. “I ran out of time in my warm-up, which was my fault, not his, and didn’t get to practice any changes. He usually has such good changes, so I was a little disappointed to miss the first one. Then I kind of said, ‘okay, that’s your practice, we better get the rest!’ But he’s so rideable and wants to do such a good job.”

Frankie, who had originally intended to move the horse up at Kentucky, made her way to Germany with the help of the Rebecca Broussard Grant, and is ably supported by chef d’equipe Erik Duvander, as well as her close friends Tamie Smith and Kelly Prather. For the German-bred Chatwin, there’s a certain poignancy to producing a result like this in his home country.

“It’s such a big honour to be have been the recipient, and to come here after rerouting from Kentucky. Chatsworth was bred an hour away from here, and was schooled at this venue as a five-year-old, so it’s really special to bring him home and show everyone how he’s grown up.” 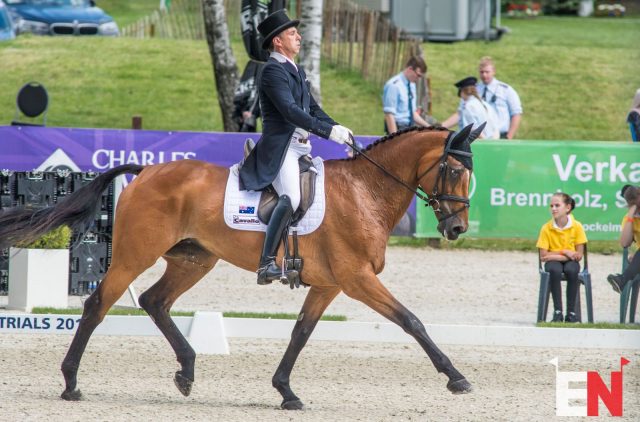 Australia’s Sam Griffiths piloted his 2014 Badminton winner Paulank Brockagh into sixth place after delivering a score of 30.9, and contributing to an internationally diverse leaderboard, which sees six flags within the top ten.

Sam Ecroyd was one of three British riders to make moves into the top ten. He rides his sixteen-year-old long-term partner Wodan III in the horse’s five-star debut. Sam, who started at Burghley in 2018 but didn’t complete, has amassed a wealth of experience at the four-star level and on Young Rider teams and now, having made his way into the world’s top 40 riders for the first time, he’s ready to make his mark at the highest level. He and the British-bred horse produced a flashy, polished test for a mark of 31.5 and eighth place. 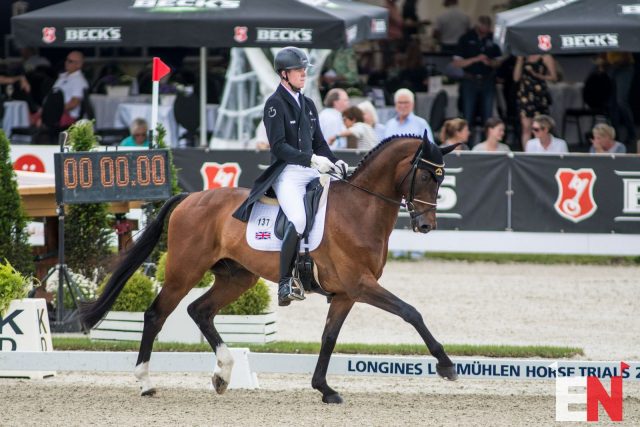 Sam Ecroyd and Wodan III make a positive impression in their first five-star as a partnership. Photo by Tilly Berendt.

“I was really happy with him – he doesn’t owe me anything, and he’s been my best horse since I was thirteen years old,” says Sam. “He never lets you down, and he didn’t today, either.”

Despite his relative inexperience at the top levels, Sam is pragmatic about the challenge ahead: “it’s quite different to anything I’ve jumped before – I think it has a strong emphasis on the technicality, but it’s a different type of question to the other five-stars. It’s not something we get a huge amount of in England – it’s big, because all five-stars are big, but it’s not massive. It’s just different. There are lots of angles, lots of accuracy tests – not something we’ve done a huge amount of, but he usually looks after me!” 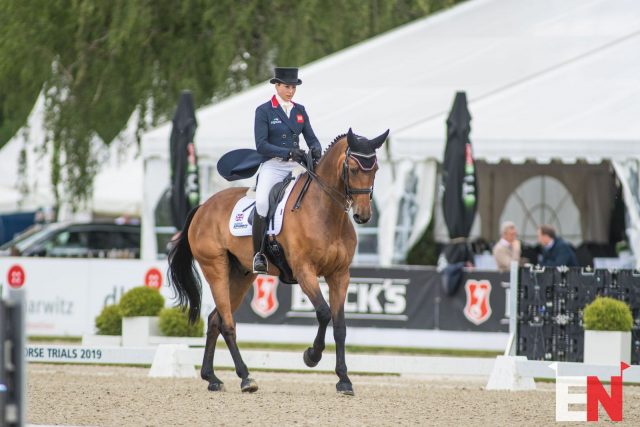 Sarah Bullimore was another British rider to sneak into the top ten, and she did it convincingly, placing ninth overnight with Conpierre (31.7) and tenth with the talented but notoriously tricky Reve du Rouet (32.1), who took a good look at everything as he entered the arena and then decided to save his antics for another day. While not their best score at this level, it’s certainly good enough on a leaderboard that, discounting the two outliers at the front, is tightly-packed.

Now, we’re looking ahead to tomorrow’s cross-country challenge, which begins at 10.15 a.m. local time/9.15 a.m. BST/4.15 a.m. EST. It’ll all be live-streamed, once again, via Horse&Country TV, but if you can only tune in for a few rounds, here are the times you need to know: