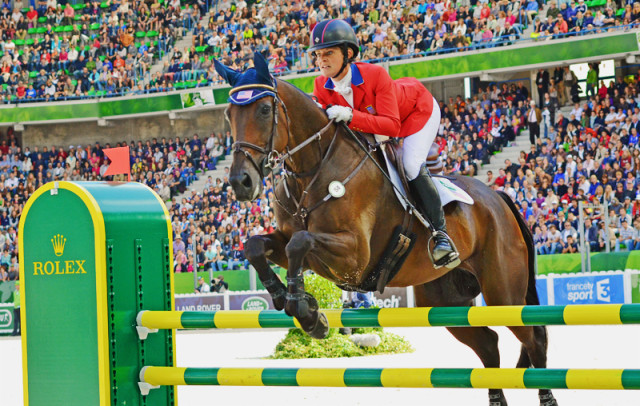 Lynn Symansky and Donner at WEG. Photo by Jenni Autry.

Lynn Symansky announced today that she is offering syndicate shares for Donner, her 12-year-old OTTB gelding with whom she represented the United States at both the 2011 Pan American Games in Guadalajara and the 2014 World Equestrian Games in Normandy.

“I am excited to announce the formation of the Donner Syndicate, which will allow this talented horse to continue in international competition and to obtain another horse to follow in his hoof prints,” Lynn said.

“Owners will not only share in the expansion of Donner’s international competitive career, but will also have the opportunity to be part of the development of an up and coming young superstar of the sport.”

Twenty shares will be made available in the Donner Syndicate, and all share holders will also be members of a syndicate of a yet-to-be-purchased young horse with international potential.

“I truly believe that Donner is the ‘people’s horse,’” Lynn said. “I have tried to structure the syndicate so that it is affordable to a wide range of eventing enthusiasts.”

Lynn and Donner’s career highlights include placing sixth individually and winning team gold at the 2011 Pan Ams, finishing fifth in his first CCI4* at Rolex in 2013 and finishing 13th at Pau later that year; and placing in the top 50 individually as members of the U.S. WEG team squad last year.

Lynn and Donner are entered to compete at Rolex next month after a successful run in the Advanced at Carolina International this past weekend. For more information on the Donner Syndicate, please visit Lynn Symansky’s website here. Go Donner!