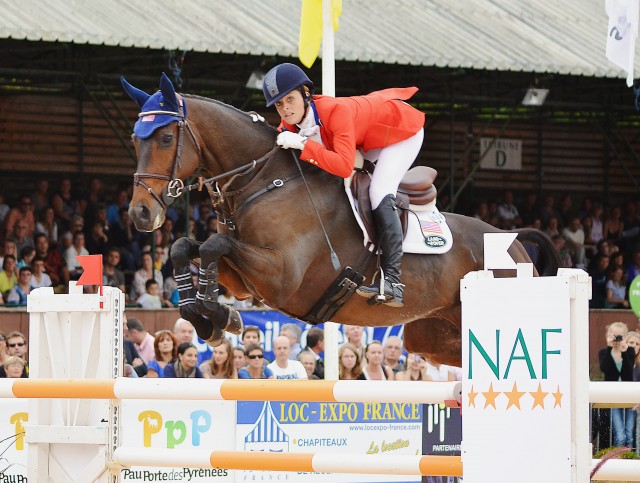 Lynn Symansky and Donner at Pau. Photo by Jenni Autry.

Rolex entries closed Tuesday, and fans of a certain Flying Deer will notice two names notably absent from the list: Lynn Symansky and Donner. After the team vets found a little fill in one of Donner’s ankles following a routine scan at the Ocala training sessions earlier this year, Lynn made the executive decision with coach David O’Connor and her own vets to play it safe. “The plan was always to see how the spring goes and maybe go to Kentucky,” Lynn said. “But I decided to back off his work because he doesn’t need to get to a spring three-day. He doesn’t have anything to prove on the cross country.”

That’s an understatement. After a double-clear trip in his four-star debut at Rolex last spring, Donner then went to Pau last fall and had the fastest double clear across Pierre Michelet’s course. If you start ticking through the U.S. WEG hopefuls, the list of horses with two double clear cross-country runs in their last two four-stars isn’t a long one. With that in mind and the fill in the ankle throwing a bit of a curveball at her spring plans, Lynn has been making the most of it by focusing on dressage, with the end goal being WEG or Burghley later this year.

“He had a little bit of a break after Pau, but not much because he doesn’t do well with a lot of time off, so we’ve been hacking and flatting,” Lynn said. “I’ve been really working on having some more tools in the ring for tension. I’m never going to get rid of his nerves, and when those come out, his trot gets less than it is. It actually is a nice trot; it’s just being able to show it. He’s not a 10 mover, but he can move well enough.” Donner scored 54.8 and 53.3 on the flat at Rolex and Pau, respectively.

With more time on her hands since Donner isn’t competing until later in the season, Lynn has been spending a lot of time working through every little detail in the four-star test. “I’ve been walking the four-star test and trotting the four-star test so you think about every step of every corner,” Lynn said. “I think having the little step back has given me a chance to look at what you brush over because you’re trying to put so many things together. Hopefully it will benefit us in the long run.”

Lynn will get to put some of those new dressage tools to the test soon, as she and Donner are slated for the test ride at Rolex. From there, Lynn’s plan is to target the Jersey Fresh CIC3*, perhaps the Virginia CIC2* and then head to Canada for the Bromont CIC3*. “He still has to get out this spring,” Lynn said. “He doesn’t need to prove anything in terms of being a good four-star cross-country horse, but he still needs to get out and do courses. He can be a bit spooky, so it’s important even just for me and him to get out and not even think of WEG selection. He needs to get a run or two under his belt.”

In addition to Donner being happy and healthy, Lynn is also celebrating the continued improvement of Waitingi Notebook, her two-star mare who suffered a life-threatening pasture accident in January. Mouse just came home on Tuesday after being cared for by Po Tathum and the Piedmont vet team, and while she isn’t out of the woods yet, the fact that she’s even made it this far is a huge testimony to the mare’s fighting spirit. “The biggest struggle in the long run will be the damage to her foot,” Lynn said. “The injury affected all three joints — pastern, fetlock and coffin — so the big thing was making sure all the infection was gone in each of those.”

There was also significant damage to Mouse’s coronary band — much like the injury Jan Byyny’s Syd Kent suffered at Millbrook last year — and Lynn said the vet team at Piedmont flushed out an incredible amount of dirt and grass that had mashed its way into her coffin bone. “It’s just getting that coronary band to grow down and making sure that stays healthy and stable,” Lynn said. “Hopefully she can be OK to have babies or be a trail horse for my mom. I’ll never say never. That fact that she’s such a sweetheart and so amazing is the reason she’s alive. I think we just got lucky. She’s beaten the odds.”