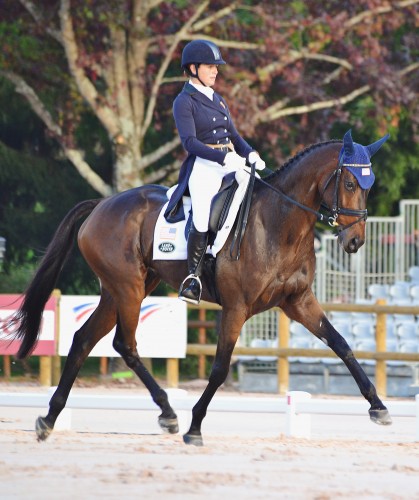 It’s been a busy morning in the Team USA camp, as we’ve already had three Americans ride their dressage tests here at Les Etoiles de Pau. Lynn Symansky and Donner were third out this morning, scoring 53.3 to sit in 21st currently. The judges are out for blood this morning, and it’s been very difficult for the riders to claw their way back after a bobble or mistake. Donner scrambled into the halt at the beginning of the test and anticipated trotting away, and the marks never really recovered after that. The judges are also really rewarding outstanding movers, and Donner — try though he may — just can’t compete with the fancier horses. So that gives you an idea of how the judges came to that score of 53.3. I caught up with Lynn after her test, and she was overall pleased with Donner, though disappointed in that first halt and how the rest of the test was scored.

But, like Lynn said, this certainly isn’t a dressage show. We don’t call Donner the Flying Deer for nothing, and I think he’s going to play with Pierre Michelet’s cross-country course tomorrow. The general consensus among the riders is that the course starts out softer and then builds, with more difficult questions surfacing the further you get into the course. The sheer length of the course — 33 jumping efforts in all — makes it both mentally and physically grueling for both horses and riders, so it’s going to be a big test for Team USA. We’ve also had Kristi Nunnink and R-Star and Michael Pollard and Mensa go for Team USA, scoring 54.5 and 55.2, respectively. I’m trying to track them down for interviews and will bring you more on their tests during the lunch break.