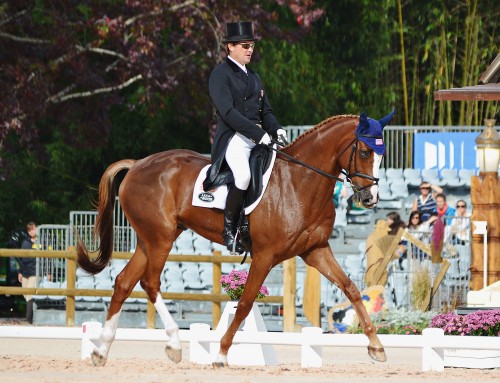 Phillip Dutton and Mr. Medicott ended the morning session of dressage here at Les Etoiles de Pau on a very positive note, scoring 44.2 in their test to moving into fifth place at the lunch break. With just 14 horses left to go in the dressage, it’s getting very competitive, and Phillip and Cave stayed cool under pressure to deliver the very good score Team USA has been looking for this morning. I swear I saw Phillip sneak in a fist pump when the score was announced, so I think he was quite pleased too. I’m hoping to catch him for an interview during the lunch break and will bring you that video just as soon as I can. We now have two riders in the top 10 here at Pau thanks to scores in the lower 40s, as Hannah Sue Burnett and Harbour Pilot scored 45.7 for Team USA yesterday.

It’s been a bit of a quiet morning here at Pau, and Phillip and Cave’s test is the second best we’ve seen so far, bested only by Lucy Wiegersma and Simon Porloe, who delivered a very accurate test to move into fourth place on a score of 43.8. No one has caught our overnight leaders from yesterday, and William Fox-Pitt remains at the top of the leaderboard with Seacookie TSF on a score of 41.5. He’s also tied for second with Andrew Nicholson and Quimbo on Neuf Des Coeurs on a score of 43.2. If you watched my interview with Andrew during the press conference yesterday, you probably gathered that he’s not at all happy that he didn’t take the lead with Quimbo, so I imagine he’ll be out for blood later this afternoon with Mr. Cruise Control. 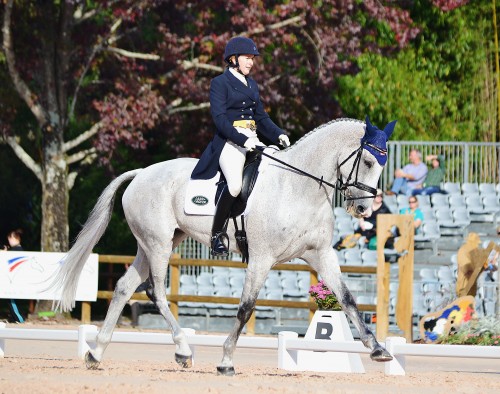 In addition to Phillip, we had three other Americans ride in the morning session, with Lynn Symansky and Donner kicking things off as the third pair out, scoring 53.3. After a wonky halt to begin the test, Lynn and Donner struggled to recover, and the judges certainly weren’t feeling generous after seeing that initial bobble. If you missed my interview with Lynn after her test, be sure to check that out here. Kate and I agree that we’re seeing harsher scoring today, and there’s absolutely no room for error, which Michael Pollard discovered first hand when Mensa broke during the second extended trot. Prior to that, we were seeing a lot of 8s on the score board, and Michael and Mensa were poised to sail into the top 10. But after that mistake, the scores plummeted, leading to a score of 55.2. 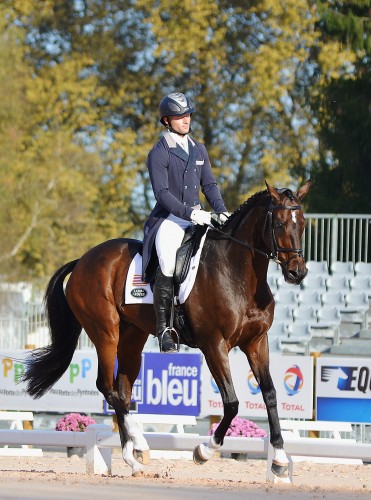 Kristi Nunnink and R-Star also faced the judges’ wrath early in their test when Rosie broke during the medium trot, and they got a bit discombobulated at the canter when she swapped behind, which affected the flying change that came shortly thereafter. Rosie is a fabulous mover, but with the judges carefully scrutinizing every moment and flying changes counting as a double coefficient movement, the overall score definitely suffered; they scored 54.5. We still have one more American left to go today, with Marilyn Little and RF Demeter set to ride their test at 2:16 p.m. (8:16 p.m. local time). And we’ll also be bringing you coverage of Canada’s final rider, Hawley Bennett-Award and Gin & Juice, who go just after Marilyn and Demi.