Mackenzie Spaes is the president of the University of Alabama's eventing team, which has really grown and seen success in just its first year of operation. She's kindly sent in an update on her team and what they've been up to since forming. Do you have a tip or story on a collegiate team? Send it to [email protected] 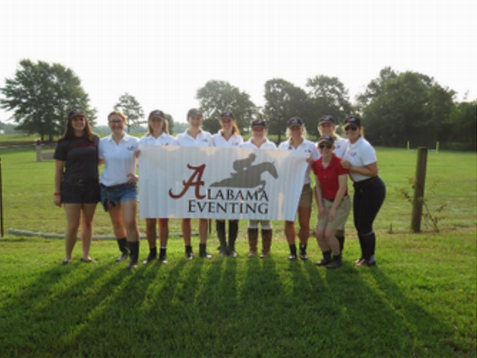 I wrote a blog for Eventing Nation just one year ago, and I am thrilled to share that we have made huge milestones as an up and coming eventing team. Our team is only a year old; I was one of the founding members in the fall of 2013.

When the team was first founded I had no idea the accomplishments we were going to achieve in our first year. We have hosted two successful schooling shows and a clinic, and we have also sent two teams to the Collegiate Challenge at Chattahoochee Hills Spring Event in 2014. I never believed this was possible.

The most amazing thing about the sport of eventing is how much support you get from your fellow competitors. Everyone around us wanted to see us succeed and was standing right behind us through the hardships. I traveled to Chattahoochee Hills in the fall of 2013 with two other teammates. It was the first official Collegiate Challenge; none of us were competing, but we decided it would be beneficial to make an appearance and show how serious we were.

We set up a booth overlooking the beautiful facility and just waited. We didn’t know if we’d get donations, support from people, interest, or even just meet people. People slowly came up to us and introduced themselves, watched our video, and learned more about our upcoming team. I could see in their eyes how they appreciated the fact that even though we didn’t have horses, or members there to compete, we still showed up.

We left Chattahoochee Hills that day somewhat defeated. We hadn’t raised any money or received any donations and I didn’t really know where to go next. I knew that we needed some sort of kick start to get the ball rolling.

If it’s one thing I learned from the sport is that you can never give up no matter how defeated you feel. Eventers never quit. We persevere to achieve every goal we set. Our president at the time, Lizzie Walters, decided it would be best to contact other eventing teams and get ideas from them. UGA, Clemson, UK, etc… all had successful eventing teams and we knew we could learn from them.

Each team gave us a special piece of information that I knew would help us succeed. There are no words to describe how thankful I am to have such amazing collegiate eventers from other schools who always support each other. It makes this so much more rewarding.

After communicating with the other schools, we figured our best fundraising idea would be to sell t-shirts. We decided on a simple t-shirt with our logo and started to market it. The demand for them was insane, people were buying them left and right.

I finally felt like we were headed in the right direction. That was almost a year ago. I was elected president in the fall of 2014 and I cannot describe how honored I am to be chosen by my wonderful teammates.

Since the beginning of the school year, we have hosted a UA Eventing Clinic with Bryan Tweed and a combined test/schooling show with Nick Cwick as our judge. Bryan did an amazing job working with all of our team members. The basis of his teaching was surrounded by four elements we needed to master to improve our riding; direction, speed, balance, and rhythm. Four qualities that we understood as riders but sometimes overlooked. He taught us different exercises that would improve each quality while improving our riding in its entirety.

Our Fall Schooling Show was our biggest success as a team. We put on a combined test, jumper rounds, and even test’s of choice. Nick Cwick did a great job encouraging members and competitors with helpful comments in dressage. He was incredibly helpful and we’re happy to have him as a supporter of our team.

We are so thankful to have amazing people who continue to support our team and ensure that we are successful. Collegiate Eventing is becoming more and more successful everyday, and I’m so excited to be a part of it. Be on the lookout for our upcoming t-shirt order form.

Please like us on Facebook at UA Eventing! Thank you to all our sponsors and Ride, Tide, Ride!