Dale Hinman and Adrienne Classen of Wits End Eventing were kind enough to collaborate with Eventing Nation on this new feature series, Make Me A Match. The idea is to take mares volunteered by EN readers and explore a scientific way of matching her with a stallion to create the best possible eventing progeny. If you haven’t already, check out our article on the Wits End Eventing breeding process, and then enjoy this insight into a premiere U.S. eventing breeding operation! 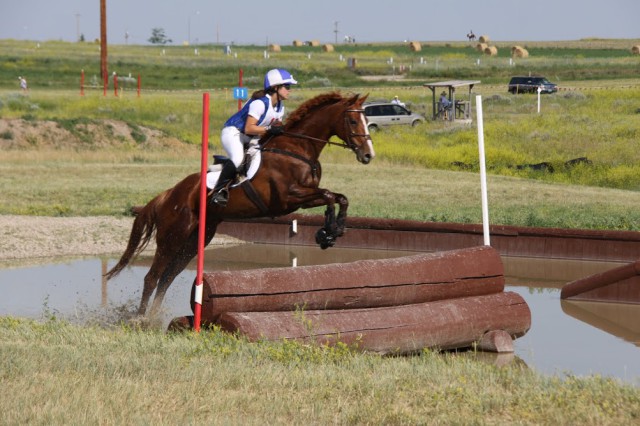 We were overwhelmed with 57 entries and many amazing mares including successful CCI2* horses and one lovely mare that ran Rolex. The decision was extremely difficult, but, in the end, the Valentine’s Day spirit overcame us, and we picked an up-and-coming mare that was hard not to love, Christina Bock’s Buffalo Princess. We also felt that she had the most to offer in terms of explaining what we think about when selecting a stallion match.

Buffalo Princess (Olmodavor x Neon Bright, Alphabet Soup) is a 9-year-old off-the-track Thoroughbred currently competing at Preliminary. Physically, she is well put together and built uphill. Her trot is regular although not spectacular, but she has a nice balanced canter. What we really loved was her bright eye and her fantastic attitude. She looked happy to negotiate the gymnastics, she was forward and she was smart about where she put her feet. While her pedigree lacks big names in the first three generations, her breeding really shines in the fourth generation and beyond. The importance of this will become evident later.

Physical attributes: As mentioned above, our chosen mare has good confirmation and a great attitude. Like many full Thoroughbreds, however, her gaits and her jump could use a bit of Warmblood flair.

Pedigree and Linebreeding: When analyzing a pedigree, we think in terms of linebreeding, a technique that has been successfully used by both the racehorse industry and many Warmblood registries. As mentioned above, Buffalo Princess has some fantastic things going for her in her “engine room”, the fourth to sixth generations in a pedigree. 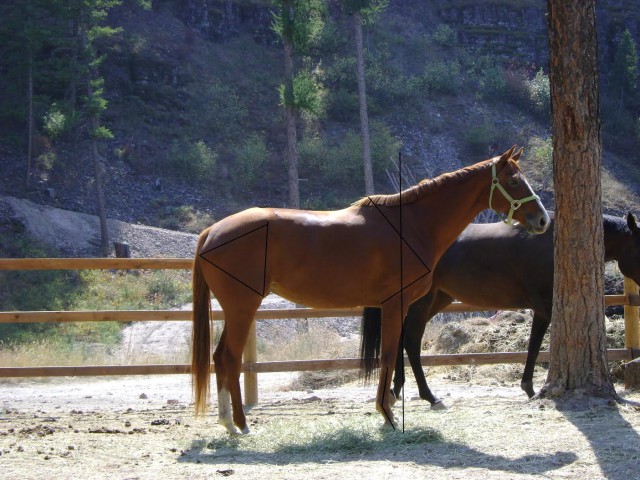 Prince John: As far as U.S.-bred Thoroughbreds go, we seek out certain horses that we feel from research and from our database are particularly potent for breeding an upper-level event horse. Buffalo Princess has a smattering of good names (My Babu and Sir Gaylord to name a few), but what really stands out for our linebreeding goals is her 5×5 cross of Prince John. Prince John is the grandsire of Lonesome Glory, the five time American Champion steeplechaser, winner of the Breeder’s Cup Steeplechase and the first U.S. steeplechaser to win over $1 million in prize money.  He is also the damsire of Cozzene (also in Buffalo Princess’ pedigree), the 1985 American Champion Male Turf horse and winner of the Breeder’s Cup Mile.

Steeplechasers and turf horses are fantastic to see in an event horse pedigree. Prince John appears in the pedigrees of eventers such as Rather Well, Chilli Morning and Courageous Comet. Buffalo Princess’s two crosses of Prince John are nice, but what is even more impressive is that one of the crosses is through a son (Stage Door Johnny) and one is through a daughter (Ride the Trails). Having both male and female lines is called sex balancing and is an important part of linebreeding.

Tom Fool: Buffalo Princess has five crosses through three different lines of Tom Fool. Tom Fool is primarily known as the sire of Buckpasser who accounts for three of those lines. Buckpasser is an outstanding broodmare sire and stamina influence on modern Thoroughbreds, and we like stamina in event horses. All three of Buffalo Princess’s Buckpasser lines are through daughters. Tom Fool is in the pedigree of upper-level horses including Sharon White’s newest CCI4* partner Wundermaske and Karen O’Connor’s old partner Worth The Trust.

Goals: Improve stadium jump and trot and find more lines of Tom Fool and/or Prince John, sex balancing if possible. As always, keep our percentage Thoroughbred around (or above) 75%. The stage is set, and the search for a stallion begins.

Here’s a short clip of Buffalo Princess and Christina in a jumping lesson:

Low Hanging Fruit: You probably have realized by now that Chilli Morning is not only listed above as a carrier of Prince John but is also not too shabby an eventer and just happens to be a stallion, so let’s take a look.

The top influence when crossed with this mare turns out to be Northern Dancer with second place going to Secretariat. Northern Dancer is a nice surprise as he is known for passing jumping ability, and Secretariat you’ve likely heard of! The combination weighs in at around 81% Thoroughbred and should succeed in improving jump and gaits (even William Fox-Pitt can’t get third at WEG on a dud).

Out of the Box: When it comes to adding jump to eventers, some warmblood lines show up regularly in the top ranks. If you have looked at any of the horses we’ve bred, you’ll notice Cor de la Bryere, Ramiro Z and Alme Z.

With a bit of searching we found the stallion Amiro Z, a 2004 Dutch Warmblood who fits our needs nicely. The cross gives us 84% Thoroughbred and Amiro Z brings in a male line of Buckpasser (helping to sex balance) as well as bringing in Ramiro Z (sire of Olympic Gold and Silver medalists) and Alme Z (sire of two world champion and three Olympic jumpers) for jump and movement. An added bonus in this match is another line of Missy Baba (daughter of My Babu, grandsire of Bruce Davidson’s JJ Babu).

Hopefully this has provided some insight into our process and into why knowing what influential ancestors (not just parents) are in your horse’s pedigree is so important.

How can you not pick the Rolex horse you ask?  Because we are pleased to announce we will be making a few more matches in a short series for EN! If you’d like a personal consultation, contact us.

Buffalo Princess and Christina compete in the dressage phase: