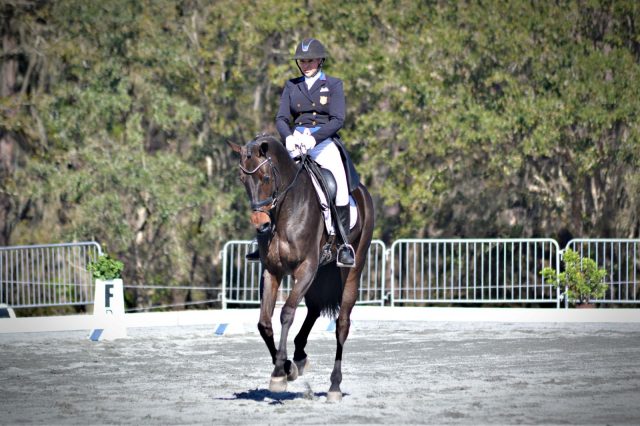 A glance at the Red Hills dressage scoreboard makes it look like this place is a stocked pond of Valegros, with FEI scores reaching deep down into the 20s. This year’s leading CIC3* dressage score, a 24.0 scored by Marilyn Little and RF Scandalous, is 20.1 points better than last year’s leading score, a 44.1.

American dressage has improved but not THAT much, y’all. Public service reminder! The method of calculating dressage scores in eventing has changed effective Jan. 1, 2018: FEI dressage scoring has dropped the 1.5 coefficient and is now equivalent to dressage scores at USEF horse trials. The coefficient was removed, according to the FEI, “to address risk management issues through rebalancing the importance of cross country skills.”

Previously, scores were calculated by taking the percentage score, subtracting from 100 and multiplying by a coefficient of 1.5, with the resulting figure rounded to one decimal digit. Now, scores will no longer be multiplied by a coefficient of 1.5. Removing the coefficient aligns with the FEI Eventing Committee’s vision to eventually transition to positive scoring in eventing. Two positive scoring proposals will be reviewed in 2018 for implementation at a later date.

There now, that’s better, deep breaths. As you were, Internet.

Having said all that, today’s CIC3* DID see a high scoring batch of competitors. EN’s resident stats guru Maggie Deatrick crunched the numbers and reports that the judging finished the day +0.66 above expected averages for these combinations. For more eventing math geekery, check out her “By the Numbers” preview here. 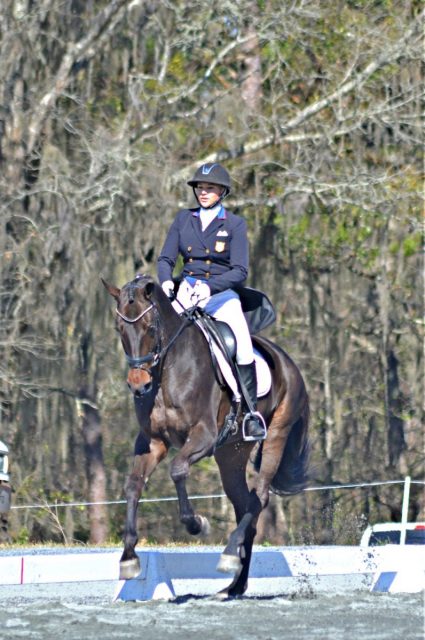 Marilyn Little and RF Scandalous, a 13-year-old Oldenburg mare (Carry Gold x Richardia) owned by Jacqueline Mars and Phoebe and Michael Manders, performed an on-form test to top the CIC3* division. “Kitty” looked eager to do her little turn on the catwalk, but without the tenseness that accompanied their last CIC3* outing at Ocala in November.

“She was very excited at Ocala,” Marilyn recalls. “It was just a really abnormal week for us from A to Z, so here I was hoping to have a quiet, calm conservative, test where she left feeling very zen.”

Aside from bouncing into the canter rather than the trot from their first halt-salute — you cannot blame a girl for feeling pumped about her first big outing of the season! — Kitty channeled her energy in all the right directions. “She lacked a little brilliance I know she can have, but traded on the discipline side of it. She gave me everything I wanted and I was really happy with her.”

Marilyn is still in a boot from when she bonked her foot on a cross country jump at Ocala, breaking it into about a million pieces, which will need to be fused later in the year, post-September. She has spent a lot of time on a scooter since then but hasn’t missed any time in the saddle; she insists that it doesn’t bother her when she’s riding: “I’m totally pain free.” Funny, that’s what Michael Jung said, too.

Nonetheless, she’s ready for a crack at tomorrow’s CIC3* cross country course: “Whenever you’re walking around the course and you just feel like you can’t wait to get out there and jump, it’s really exciting. Everything is very well presented, and it has a great flow to it, which for many years was a concern here but they’ve done such a beautiful job of maximizing everything the property has to offer.”

Marilyn is aiming Kitty toward Kentucky and notes that Red Hills’ galloping lanes are great for horses working in that direction. “In Wellington we do not have opportunities like that!,” she says. “How fast I go tomorrow just depends on what [Kitty] says, but I’ll still really use those galloping lanes to open her up and gain fitness. 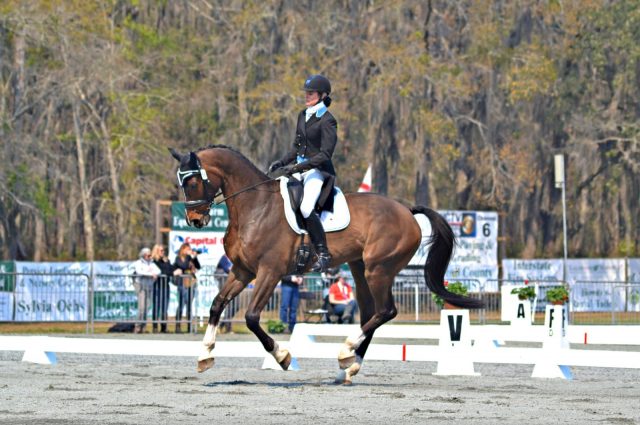 Jordan Linstedt and RevitaVet Capato, a 15-year-old Hanoverian gelding (Contendro I x Annabelle) owned by the rider and Barbara Linstedt, swooped into second after the lunch break on a 29.5. This pair has really hit their stride in the first phase, and they performed an elegant and correct test. West Coast represent!

To be fair, Jordan has been bouncing back and forth between her home in Washington state and the East Coast with regularity for the past year. She came over early for Kentucky 2017, then rerouted to Bromont, then went home, then came back for the AECs and Plantation and Fair Hill in the fall, then went home. Now she’s back, again, with an eye on Kentucky or maybe Badminton. What’s the mileage on your truck, Jordan?!

For the winter she’s been based near Leslie Law’s place in Ocala, with whom she has been training, but will gypsy caravan herself and her crew to Southern Pines after Red Hills, where she’ll train with Bobby Costello and use Will Faudree’s gallop for four-star fitness prep. She has eight horses with her and two students: “It’s been a big undertaking but a lot of fun.”

The only run Capato has had thus far this year was at Rocking Horse, where he put in a very nice test, but Red Hills offered a chance to test the pair in a bigger atmosphere. “Obviously it’s a lot of atmosphere and he used to be spooky, but I trust him so much more now,” Jordan says, noting that whereas she used to take a hold of him when he got uptight now she just softens and keeps riding forward. For today’s test, she says, “I didn’t feel like I went all out, but I wasn’t conservative either; I kind of found a middle.”

As for tomorrow’s course, she says, “It’s big and bold and for [Capato] I think a really nice course … I’m excited to get out there and ride it.” 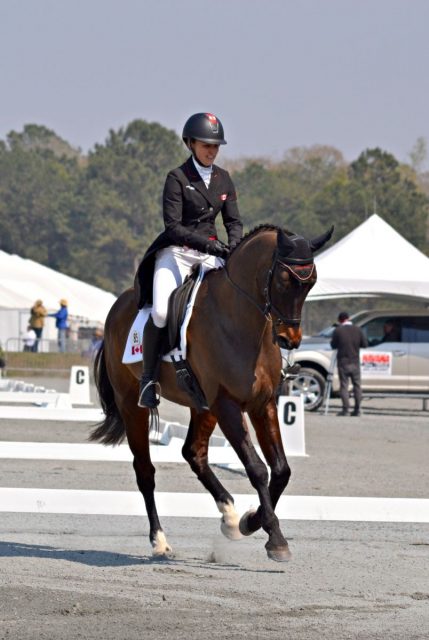 Jessica Phoenix and Pavarotti, a 16-year-old Westphalian gelding (Pavarotti Van de Helle x Fidelia) owned by Don Good, round out the top three after laying down their usual solid-as-a-rock test for a score of 29.8. “It’s always fun competing him,” Jessica says of her 16-year-old partner. He’s been relaxed all week, she says: “I was so excited to get him in the ring today. He was great — the changes were beautiful, the best they’ve ever been, his trotwork was awesome as per usual.”

Of tomorrow’s course, she comments, “It’s a big, full, forward course. It’s always hard with the path through the trees, the changes in shading. It’s definitely technical and big and should be a good test.”

Up next for this pair: The Fork, then the CCI3* at Jersey Fresh. Best of luck, you old married couple you! 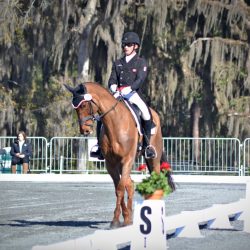 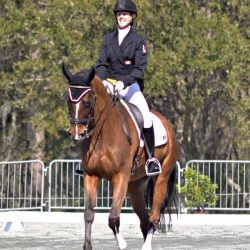 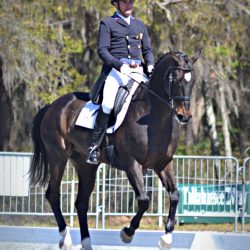 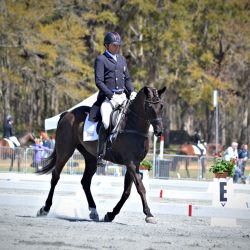 Meanwhile, over in the Adequan USEA Gold Cup Advanced division, there’s a tie for first between Phillip Dutton and Fernhill Singapore and Waylon Roberts and Kelecyn Cognac. Both scored a 29.8.

Red Hills marks the Advanced debut of Phillip’s ride, a 9-year-old KWPN gelding (Singapore x Riedellia) owned by Sue Foley, Ann Jones, and Tom Tierney. Waylon and Kelecyn Cognac, a 15-year-old Thoroughbred gelding owned by Roberts and Anthony Connolly and L. Skey Levely, are old hat at the level but this is their first time competing at Red Hills together. 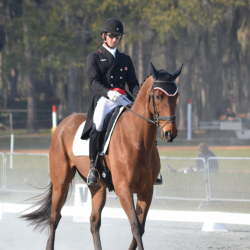 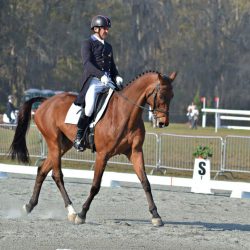 Those bros hustled off to walk cross country after their Advanced dressage rides, but we were able to catch up with Lindsay Beer, who sits 3rd in the division on a 32.9 with El Paso, a 16-year-old Trakehner gelding owned by Penny Beer. 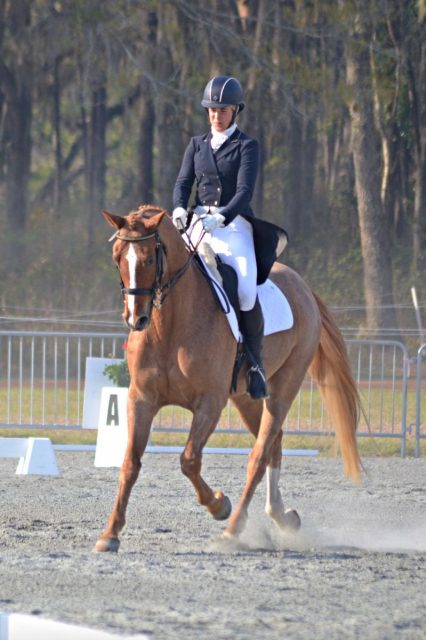 The 23-year-old young professional from Ontario has been competing “Pasta” for the last eight years, at the Advanced level on and off again for the last five. “So he’s a longterm partner of mine,” Lindsay says of her horse, who sounds like quite the character. “He’s is so cheeky. He’s like Eeyore. He’s sort of lazy and nappy and just a grumpy old man, but when it really counts he’s on. He sleeps every single day before I get on him, napping in the crossties like, ‘Ah, geez, another ride,’ then as soon as I take him out he’s like, ‘OK, let’s do this.’ And he knows when he’s competing.”

Of their dressage test, she says, “He was really good today, very obedient. Normally we struggle with him getting a little bit lazy in the ring, but he kept his energy level up which was great without getting too feisty.”

Looking ahead to cross country, Lindsay says that the course looks good but will be a bit of a difficult course for Pasta. “There’s a lot of turning and narrow galloping lanes, so it will be tough to make time. But it’s his first run at this level for the year so we’re just going to go at a nice steady pace.”

Lindsay winters in Aiken and trains with Joe Young. Carolina is up next on their schedule before they head home for the summer. 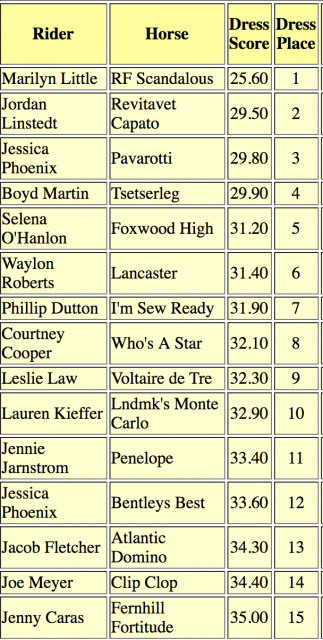 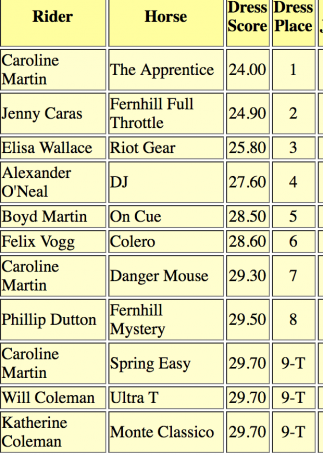 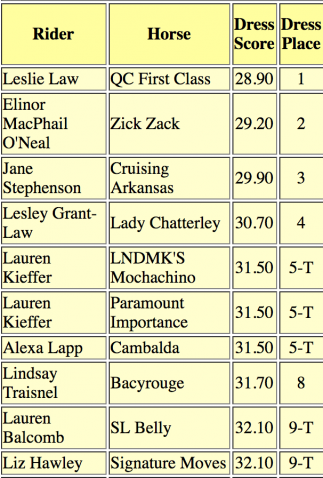 CIC3* show jumping begins tomorrow at 9 a.m. followed by cross country at 10:50 a.m. The Advanced cross country takes place immediately after the CIC3*, starting at 12:31 p.m. Until then, go eventing!