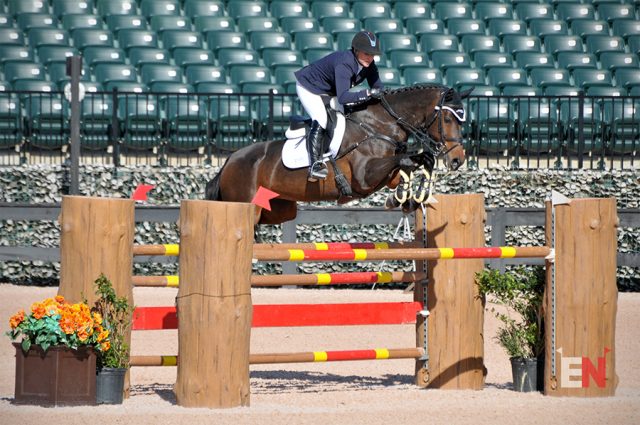 The day has dawned sunny and gorgeous at The Fork Horse Trials, presented by Lucky Clays Farm, at the Tryon International Equestrian Center in Mill Spring, NC. The Advanced and CIC3* competitors did their dressage on Thursday and returned to the George Morris Arena this morning for show jumping. 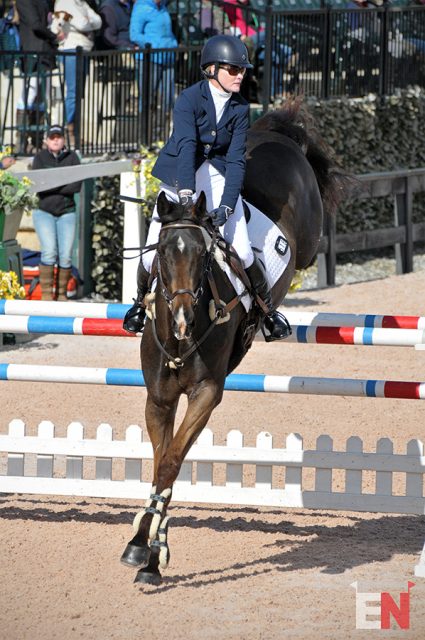 Marilyn Little and RF Scandalous, owned by Jacqueline Mars, Robin Parsky and Phoebe and Michael Manders, jumped a clear round to hold onto their lead in the CIC3*. They will head into tomorrow’s cross country on a 41.7. Marilyn was thrilled with “Kitty” having worked hard all winter on her show jumping, but being that this is the 12-year-old Oldenburg’s first full run of the year, Marilyn said she will take time early on course to assess the mare’s fitness and feeling before kicking on.

Kim Severson and the Cross Syndicate’s Cooley Cross Border also remain on their dressage score of 43.7 following a beautiful fault-free round, the fifth career double clear at the CIC3* level for the 10-year-old Irish Sport Horse. The top two riders will have some breathing room over the rest of the field on cross country, but the scores become tightly packed from here on, with less than 10 points separating third through fifteenth place. 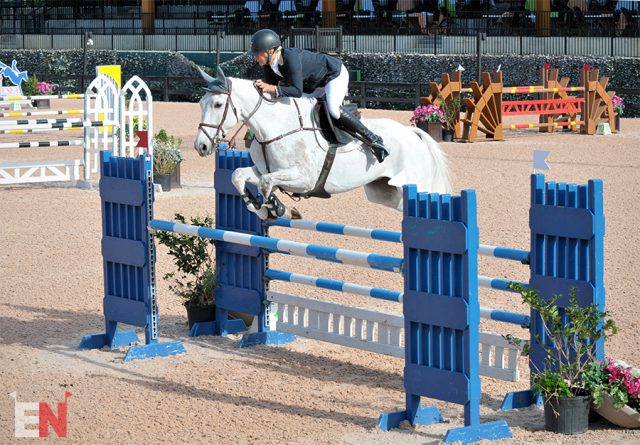 Sara Kozumplik Murphy was absolutely delighted with Rubens D’Ysieux, a 12-year-old Selle Français owned by the Rubens D’Ysieux Syndicate, who show jumped double clear to move up from fifth to third. They head to cross country on a 50.6.

Doug Payne and Vandiver, owned by Doug and his wife Jessica along with the 13-year-old Trakehner’s breeder Debi Crowley, also moved up two places to fourth place with a double clear round and two-phase score of 51.5. We owe a congratulations to Doug for winning last night’s $5,000 Welcome Stakes at the Tryon Spring III Horse Show after he’d spent a full day eventing! 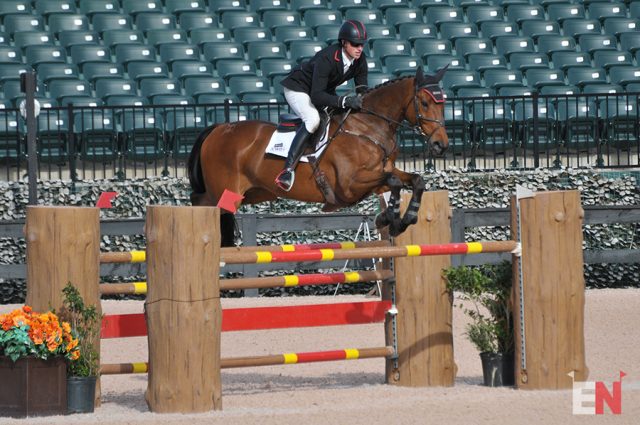 Coming in fifth after show jumping is Phillip Dutton and Thomas Tierney and Ann Jones’s 12-year-old Irish Sport Horse Fernhill Fugitive, moving up from seventh with no penalties to add to their dressage score of 51.5. Phillip had the last fence down with the Revelation Group’s Fernhill Revelation, dropping them from third to seventh place. Phillip and Kristine and John Norton’s 13-year-old Dutch Warmblood I’m Sew Ready remain tied with Carolina Martin and Sherrie Martin’s The Apprentice, with both pairs moving up to ninth on 53.7. The Mr Medicott Syndicate’s 18-year-old Irish Sport Horse Mr Medicott looked happy to back in the show ring, posting a fault-free round and moving up to 11th on 54.7.

Sharon White’s 10-year-old Irish Sport Horse Cooley On Show showed off his incredible jumping style, producing a double clear round and moving into sixth place on 51.8. Selena O’Hanlon and John and Judy Rumble’s 14-year-old Canadian Sport Horse Foxwood High had an unfortunate rail down at a vertical, sending them from fourth to eighth place on 53.6. 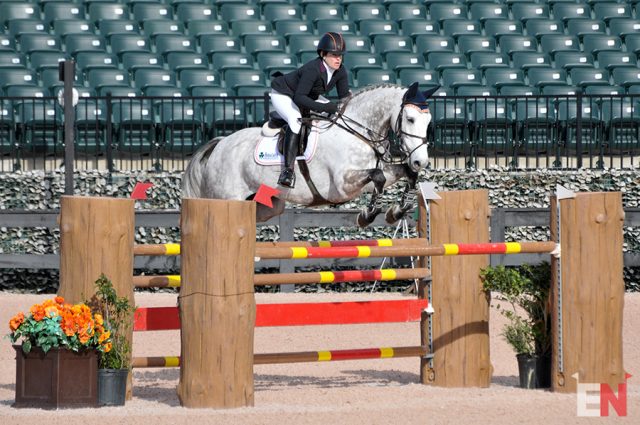 Shoutout to Caroline Martin who went double clear on all three of her CIC3* rides. The Apprentice gave the fences a ton of room and Caroline rode him well. Danger Mouse, owned by Caroline and her mom Sherrie, jumped out of his skin to move up to 11th place and Spring Easy, also owned by his rider and Sherrie, hopefully gave Caroline a good with his double clear as they look ahead to Rolex later this month.

Liz Halliday-Sharp and Deborah Halliday’s Fernhill By Night remain on their dressage score 25.9 to hold their lead in the Advanced A division after show jumping. They are followed by Jessica Phoenix and Don Good’s Pavarotti in second on 29.2. Allison Springer and Arthur added a single time penalty but moved up one placing to third on 30.8. 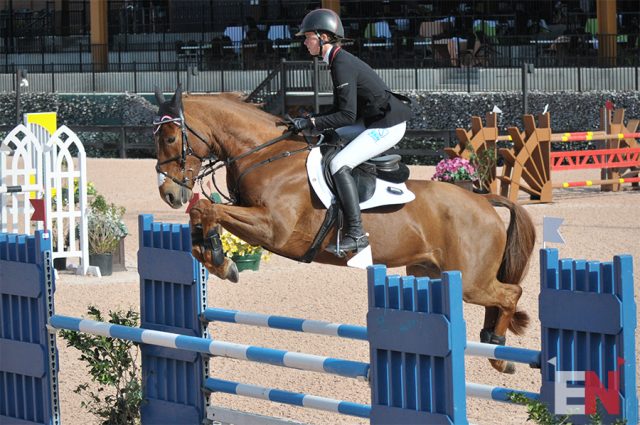 In the Advanced B division, Jessica moved into the lead with Bentley’s Best, also owned by Don Good, posting a clear round with one time penalty for a two-phase score of 35.6. Emily Beshear and Deep Purple Eventing’s Silver Night Lady had two fences down but remain in second on 40.8. Two rails and three time penalties dropped dressage leaders Jordan Linstedt and Revitavet Capato, owned by Jordan and Barbara Linstedt, down to third place.

Check back later for quotes from the leaders in both the CIC3* and Advanced divisions and much more from The Fork. Go Eventing. 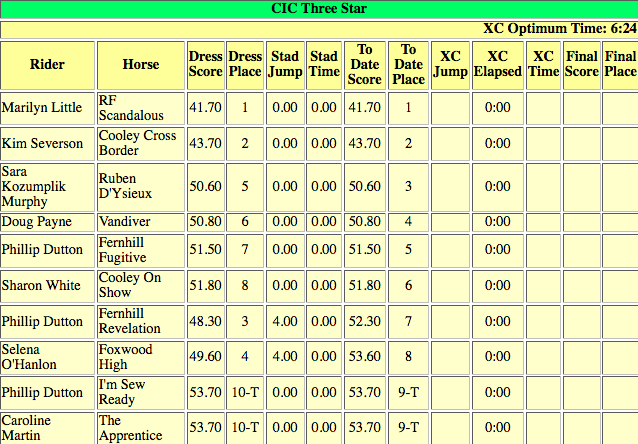