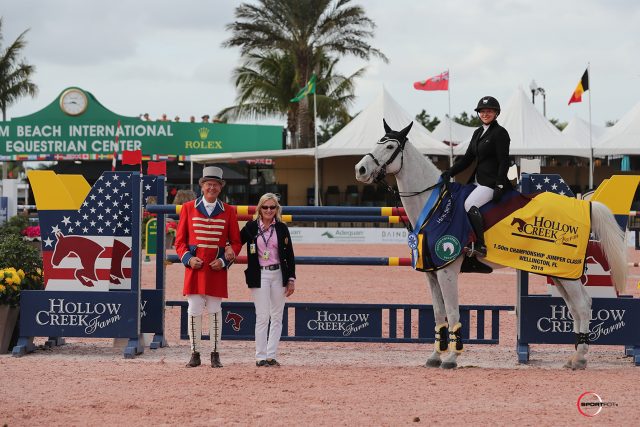 Marilyn Little and Clearwater in the prize giving with ringmaster Steve Rector and owner Karen O’Connor. Photo by Sportfot.

Marilyn Little returned to to the show ring with a bang during the second week of the 2018 Winter Equestrian Festival in Wellington, Florida, winning the $35,000 Hollow Creek Farm 1.45m Classic on Sunday aboard Karen O’Connor’s Clearwater.

She had only been back in the tack for 10 days prior to the win following a lengthy recovery period after breaking her foot at the Ocala Jockey Club International Three-Day Event in November, when RF Scandalous glanced off at the tricky corner combination on Mike Etherington-Smith’s CIC3* cross country course.

After 28 clear rounds in the 75-entry Hollow Creek Farm 1.45m Classic, 12 combinations delivered clear rounds in the jump-off on Oscar Soberon’s course. With time proving to be the deciding factor, Marilyn and Clearwater’s speedy jump-off time of 36.23 seconds gave them the win.

“He’s a very, very fast horse. I know exactly what his stride is, and if it’s possible to get there, he’s the one who will in terms of the distances,” Marilyn said. “I knew exactly what the plan was. He just needed to put in his personal best and it would be very hard to catch. I wouldn’t want to run against him.” 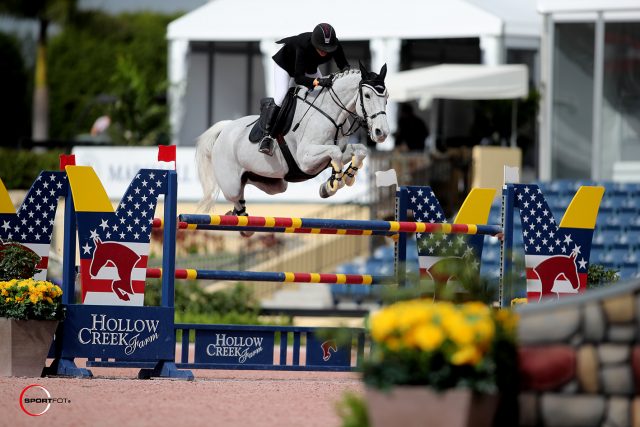 Marilyn Little and Clearwater on their way to taking the win. Photo by Sportfot.

Clearwater, an 11-year-old Holsteiner (Clearway X Come On), last competed at the Washington International Horse Show in October, and Marilyn’s super groom and barn manager Katie Madruga kept him fit and in work after she broke her foot.

“I’m so grateful for the many professionals who have stepped up and helped me keep my horses fit and in form. It’s really a tribute to my staff and my riders and other professionals who have helped me, because the horses have come out fit and fresh and really ready to go,” she said. “In the end, it probably won’t matter that I got a late start. I’ve had to be a bit patient, but this is certainly a good start. It was really a lot of fun to get back out there and for it to go the way it did.”

Clearwater will jump tomorrow in the $35,000 WEF Challenge Cup to qualify for Saturday night’s $132,000 Adequan Grand Prix CSI3*. “He feels very fresh and ready to go,” Marilyn said. “His favorite thing to do is jump under the lights.” 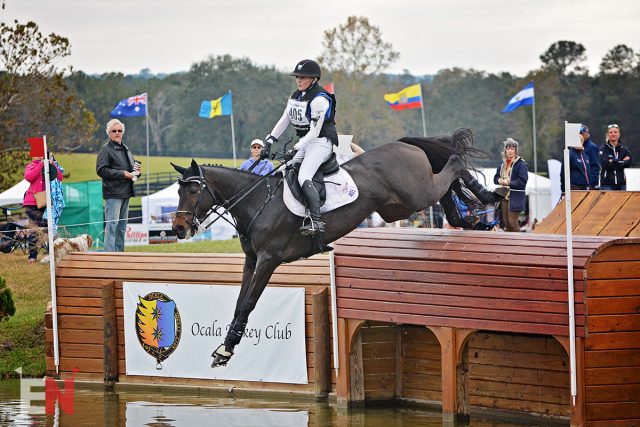 What’s Next for RF Scandalous

Marilyn is currently competing 16 show jumpers at the Winter Equestrian Festival and is also looking ahead to starting her eventing season with RF Scandalous. The only event horse in Marilyn’s string currently, RF Scandalous jumped in three 1.30m classes at WEF last week and is also showing at the Global Dressage Festival.

“She had a very uncharacteristic and odd fall season. We only ran two events because there were a lot of things from a training standpoint we wanted to accomplish. We did accomplish some of those things, especially from a rideability standpoint. I thought she was very rideable on cross country at the Ocala Jockey Club, but unfortunately we had the mistake at the corners,” Marilyn said.

“Sometimes the score isn’t indicative of the performance, but she was so disciplined and I was proud of the way she went around at Ocala Jockey Club. We had been working on that so hard since our fall at the American Eventing Championships when she was just so strong.”

Because Scandalous had a light fall season, only running at the American Eventing Championships and Ocala Jockey Club, Marilyn has kept her in work throughout the winter and galloping at the Wellington Environmental Preserve. She will start her eventing season at Ocala Winter I Horse Trials in two weeks with a run at the Preliminary level.

Marilyn had intended to compete Scandalous at the inaugural CIC3* at Live Oak, but following the cancellation of that event she is waiting to see how the mare comes out at Ocala before finalizing her competition schedule. The end goal for her spring season is competing at the Kentucky CCI4*. Scandalous is already qualified for the 2018 World Equestrian Games, having finished fourth in her CCI4* debut at Luhmühlen last year.

“I’m really looking forward to taking her to Kentucky,” Marilyn said. “I’ve had her for a long time now, and every year when I go and walk the course I think what a dream it will be to get to gallop her around.”

Scandalous has won nine of her 16 career international runs with Marilyn and has already successfully represented the U.S. at championship level, having won individual gold at the 2015 Pan American Games. She is listed on the 2018 USEF Developing Tier 1 Training List.

“This spring for Scandalous will be quite different. Kentucky is the first event that I will really take a shot at,” Marilyn said. “I only have one horse. I have to protect her. I have to make sure she is as fresh as she can be. She’s not going to be out there going for the win every time out. She’s proven she can go out and win. Now we have to make it count.”